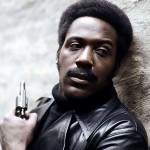 SHAFT was never one of my favorite blaxploitation pictures. Despite the reputation and legendary theme song I always thought it was kind of boring. But revisiting it in 2008 I feel like I finally get it – I really enjoyed it this time. The lyrics to the theme song are so over the top and have been goofed on so much that maybe you expect something bigger than what the movie actually is: one part detective story, one part straight up BADASS. The music by Isaac Hayes, the shots set up by director Gordon Parks, everything is designed to pay tribute to Richard Roundtree and his character of John Shaft and document what a Bad Motherfucker he is as he navigates the underbelly of 1971 New York. And it’s really not what we think of as a blaxploitation story, it’s a P.I. story. A detective hired by a gangster to rescue his daughter from the mob.

Have you seen AMERICAN GANGSTER? At the beginning of that movie the kingpin of the black mafia, Bumpy Johnson, dies. Denzel’s character Frank Lucas takes over the empire. Well, that’s who hires Shaft in this movie. He’s called Bumpy Jonas instead of Johnson, but he’s based on the same real life underworld figure. And that’s one of the many ways the movie backs up the claims made in the theme song. He makes an appointment with Bumpy, then shows up late, deliberately keeps him waiting. Then he’s rude to him. Then he makes prima dona demands for his hiring. And before Bumpy leaves he threatens him. You might think he’s just trying to act tough, but when Bumpy leaves the room he just laughs. Clearly not scared at all. That Shaft is one bad mutha shut yo etc.

The greatest scene for establishing how badass Shaft is is when some mobsters are staking out his apartment from a bar across the street. They don’t know what he looks like so he goes in and takes over for the bartender, and does a whole scam where he gets them into a conversation by giving them free drinks and having some for himself. This is a great scene because it shows

Of course, we also learn that Shaft’s one weakness is his treatment of women. He’s said to be real good in bed but a bummer afterwards – for example, when he coldly tells the girl he picked up at the bar that she has to leave now. Actually, I don’t think this was necessarily supposed to be seen as a weakness. But I’m against it. Be nice, Shaft.

By the way, I know Richard Pryor, Chris Rock, and a thousand less talented comedians have done alot of exploration of the topic of what black people are like and what white people are like, but I’m not sure if they have covered the turtleneck issue. I think this movie demonstrates that a black man can look tough wearing a turtleneck. Roundtree successfully sports black turtlenecks, red turtlenecks, white turtlenecks. Throw a leather jacket over any color of turtleneck and the guy looks great. A white man wearing that sweater looks like a sissy or a square, a black man wearing it looks like Shaft.

Let me give you an example here:

Nah, actually I have to admit, that is kind of a loaded comparison. That second picture really did come up on the first page of results typing “turtleneck” into Google images, and I think it is a pretty good example. But to be fair if I was looking strictly at ’70s pictures I could find alot of white dudes pulling it off better than this guy. I wouldn’t have to go any further than Steve McQueen.

Maybe complexion has something to do with it. Although basic color theory says you need contrast, there are some things that just don’t look as good next to a pale face (for example, nobody lighter than Ricardo Montalban should be wearing a white suit). But maybe I shouldn’t have brought race into this. Regardless of race, Richard Roundtree just looks good in the damn things. I gotta give credit where credit is due. And it has to do with the specific outfit, too. Put anybody in that jacket and sweater, it’s gonna look better than the dorky green one with the baseball hat. I mean if the white dude was wearing Shaft’s outfit and Shaft was wearing those stupid pants it might be a tougher call which one was cooler there.

On the other hand:

Although this is one of the movies that started the blaxploitation genre, people who see that term as derogatory say it’s not blaxploitation. It’s actually a pretty classy detective movie. Gordon Parks wasn’t a Roger Corman guy or anything, he was an acclaimed photographer, writer and poet. His one previous movie THE LEARNING TREE was adapted from his own autobiographical novel.

What I like best about SHAFT is the way it gives you a feel of early ’70s New York as Shaft walks through it. One of my favorite scenes is the montage of Shaft going around talking to different people on the streets trying to find a lead to where the kidnapped girl is. It’s set to an Isaac Hayes tune called “Soulsville” that’s a laidback lament about living through tough times, a little more like Curtis Mayfield than like that theme song we all associate the movie with. Parks took a standard piece of every detective story and made it into a poem about the poor people of New York.

My fellow action scholar and geocities neighbor Ryan Kenner says that characters like Shaft are part of what changed attitudes toward blacks in white America, setting the stage for President Obama. I’m not sure what I think about that, especially looking specifically at Shaft. Because this is a character who empowers black people by fulfilling a white racist’s nightmare. This is a guy who can and will steal your woman. He’ll charm her pants off, rock her world and actually be kind of bored doing it. And then if you try to confront him about it I bet he wouldn’t even remember which one you were talking about.

Obama is not that guy, he is seen as the nerdy, stable family man with a loving wife and kids. If white people thought Obama was Shaft… well, I guess some of us would’ve been even more excited to vote for him, but he would’ve scared the shit out of alot of people. He would not only be a secret Muslim and a socialist, he would be this slick motherfucker who looks great in a turtleneck who comes over to your house and smiles at your wife and he leaves with her. I guess what I’m realizing as I write this is that this character was empowering but also promoted certain stereotypes. There are worse stereotypes than that but still. I should acknowledge the stereotype while also admitting that if there is reincarnation and time travel and some sort of reality/fiction blending magic I would like to be reborn as Shaft in my next life. Just putting that out there.

But I do see a little Obama in Shaft, because he’s the guy who bridges the gap between the different groups: the black mob, the black militants, the cops. He’s not really any of them, but he works with all of them. He also has white friends including a hippie dude and a gay bartender. The only people he doesn’t really seem to get along with are the Italians, who he calls wops, but maybe when he’s not on the job he would be nicer.

In conclusion, Shaft is a sex machine to all the chicks who would risk his neck for his brother man, would not cop out if and when danger is all about, is a bad mother[unintelligible] and yet at the same time is a complicated man. Not sure if I agree with Isaac Hayes about Shaft’s woman understanding him, though if he specified which woman we might be able to clear this one up. Anyway, this movie grew on me. I’m glad I’m to the point where I can dig it.

blaxploitation Richard Roundtree
This entry was posted on Thursday, January 1st, 2009 at 5:32 pm and is filed under Action, Reviews. You can follow any responses to this entry through the RSS 2.0 feed. You can leave a response, or trackback from your own site.