HATCHET II is at least more fun than HATCHET I. Both are maybe too tongue-in-cheek, but at least they’re kind of slasher throwbacks, nothing meta-y or postmodernish or self-reflexable about them, and I appreciate that. They got Kane Hodder from FRIDAY THE 13TH parts whatever playing Victor Crowley, a Madman Marz-type ghost-of-a-murdered-deformed-guy chopping up trespassers in a Louisiana swamp.

Part 2 continues directly from part 1, with Danielle Harris pulling a James-LeGros-in-PHANTASM-2 and taking over for whoever played the last survivor in part 1. She gets away and comes back to Reverend Zombie(Tony Todd)’s shop where she took a tour boat from. She wants help killing that fuckin ghost, ’cause he killed her dad and brother. So the Reverend puts together a group of hunters to send out after Crowley, including her and her uncle Bob (Tom Holland – yes, the same Tom Holland who directed CHILD’S PLAY and wrote PSYCHO II – in kind of a Sydney Pollack type role). 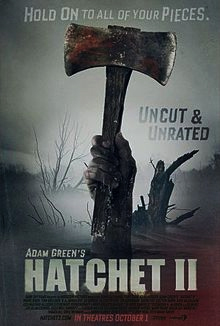 I gotta say, alot of the problems I had with part 1 have been addressed. So you’re welcome for all the great tips I gave in my review, fellas. The score is by the same guy, Andy (not Spiderman) Garfield, but as requested it sounds like a real orchestra this time instead of a pathetic keyboard one. That’s an important step toward capturing the atmosphere of the type of slasher movies they’re trying to revive here (unless they’re just trying to revive the shitty ones that you regret renting). The swamp locations, while still somewhat limited, have more variety than part 1. The characters split up to be picked off one-by-one – a poor strategy on their part, but more fun to watch than everybody standing on one tiny swamp set in one big group. And Tony Todd’s stupid cameo character is expanded and actually given something interesting to do. First he wipes off that ugly face paint around his eye, then he makes a pretty good recruiting speech, then proves to have a less-than-heroic plan (luring people from Crowley’s past to be killed in hopes it will break the ghostly curse). It’s not a role as good as Candyman, but it’s nothing to be ashamed of. At least it’s got a little bit of a twist to it.

Unfortunately there’s still a lackluster structure. After a promising horror opening it’s Tony Todd giving an overly long revised-for-the-sequel-backstory info-dump, then any momentum is stopped dead with a long meeting of the hunters that gets off on a wacky-black-guy-comic-relief tangent about Chips Ahoy cookies. I believe that’s actually a Michael Bay move: pick the exact moment when you should be building tension and suspense to instead go off on some stupid bullshit that must’ve seemed funny at the time.

And then the movie just spins its wheels for a while to pad it out to feature length. The actor Parry Shen, whose character died in the first one, comes back as the twin brother and does one of those “funny” scenes where you have to put up with a bad fake Cajun accent for a couple minutes before somebody points out that it’s a bad fake Cajun accent and that’s supposed to make it okay. Fortunately most of the movie is more serious than that, but there’s alot of dead weight in the middle section here. It’s 52 minutes into the 89 minute movie when Crowley shows up the second time.

Luckily during that small chunk of the movie when the horror shit is going on there is some enjoyably preposterous gore. In the opening, for example, Crowley reels a guy in by his intestine, then strangles him with it. I think we can all get behind that. Like Jason he has alot of gas-powered power tools that he enjoys using as weapons, for example a power sander that he uses to sand through somebody’s skull. He also beheads a guy in the midst of the ol’ doggystyle sex – the body jerks around as the blood sprays out, apparently satisfying his partner. That scene also has what I thought was a funny exchange where the girl, talking dirty, asks the guy if he likes it (yes), then if he likes it as much as ice cream (uh, yes), then if he likes it as much as Jesus, to which he mutters, “Well, that’s inappropriate.”

The supporting cast includes R.A. Mihailoff (Leatherface from Texas Chain Saw 3) and John Carl Buechler (director of FRIDAY THE 13TH PART VII: THE NEW BLOOD). Most of the cast is not terrible, but it’s never pretty when not-great actors are forced to play these phony small town characters with badly written folksy dialogue where they say shit like “fixin'” (as in Hey mama, I’m fixin’ to go to the town store to pick up some vittles for supper).

Harris is basically the leading lady (I wouldn’t say she’s the Final Girl, since she’s already set up as the heroine at the beginning). Having been in HALLOWEEN 4-5 and ROB ZOMBIE’S HALLOWEEN 1-2, not to mention MARKED FOR DEATH, she sort of knows what she’s doing in this sort of movie. I think she adds a little gravity to the thing with her serious covered-in-blood, out-for-revenge performance, although there are a couple points when you get tired of her freaking out and screaming at everybody.

But I liked the part where she was in the shower and reached for a hand gun. That’s a thing you see in every slasher movie combined with a thing you don’t see in enough.

The movie was released unrated in the United States, which almost never happens. Then it got abruptly pulled from release mid-week, which is even rarer. Some internetters are spinning this as some kind of censorship issue, but that’s complete bullshit. The truth is the AMC chain was cool enough to try out the experiment of running an unrated movie, but quickly found that since newspapers or TV won’t run ads nobody knew the fuckin thing existed, and if they did that didn’t necessarily mean they saw HATCHET, and if they did that may likely mean they would therefore not want to see HATCHET II. So the movie made about negative twenty six dollars and they realized it was a better financial move to replace it with extra shows of some other dying movie from previous weeks. You can’t really fault them for that.

Anyway, not very good, but a whole lot better than the first one. I also kind of liked writer/director Adam Green’s other movie FROZEN, so there is some improvement in his skills. And I don’t know about you fellas, but I’m pro-improvement.

Adam Green Danielle Harris Kane Hodder slashers Tony Todd
This entry was posted on Wednesday, February 2nd, 2011 at 2:37 am and is filed under Horror, Reviews. You can follow any responses to this entry through the RSS 2.0 feed. You can skip to the end and leave a response. Pinging is currently not allowed.