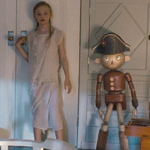 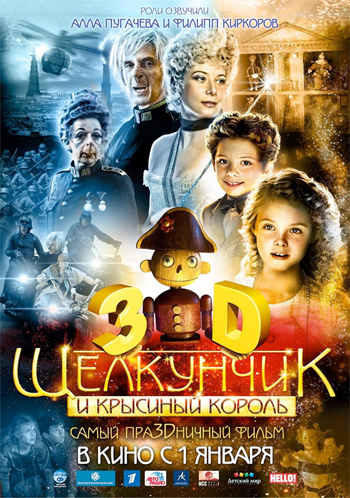 Elle Fanning stars as a little girl named Mary who is sort of the Alice or Dorothy character who’s transported to a fantasy world of nutcracking. She lives with her bratty, arsonist brother Max (Aaron Michael Drozin), inattentive parents (Richard E. Grant and Julia Vysotskaya) and nanny (Frances de la Tour) in a big mansion, where she is visited by her beloved Uncle Albert (Nathan Lane), who sings the kids songs to the tune of Tchaikovsky’s Nutcracker pieces and gives Mary a dollhouse and a Napoleon nutcracker. No gifts for Max though, and everybody is surprised when he breaks the nutcracker’s jaw by stuffing too many nuts in its mouth (mafia style).

One thing I should mention about Uncle Albert: he is Albert Einstein. Or, as Lane helpfully explains on the making of featurette, “not necessarily Albert Einstein.” But he has Einstein’s hair and a ridiculous Nathan Lane approximation of his accent and sings a terrible song called “Everything is Relative” and keeps talking about his theories of relativity. It’s pretty clear that he’s supposed to be Albert Einstein, but what is less clear is why the hell would the uncle be Albert Einstein in this movie? I don’t get it.

Anyway the nutcracker, or N.C. for short (that’s the kind of writing magic you can only achieve by planning a movie for 40 years), comes to life because Mary believes in him so much. Suddenly he’s a frantic CGI character voiced by Shirley Henderson. I think they’re supposed to have a sort of a HIS GIRL FRIDAY battle-of-the-sexes back-and-forth quips thing going, but it’s hard to do that between a little kid and an obnoxious cartoon character. N.C. complains that women aren’t good at military strategy, Mary says precocious things like, “Men can be so ungrateful. It’s appalling, that’s what it is!” Kids and nutcrackers say the darndest things, you know?

Realities and proportions shift like in Alice in Wonderland. N.C. seems to have grown about 3 or 4 feet taller, but then they go out into the living room and in fact maybe Mary has shrunk, because now the Christmas tree is giant and the ceiling is the sky and the dollhouse is real-house-sized compared to them. The dolls that were inside (a juggling clown, a monkey, a drummer boy) are now live action characters. The monkey is a guy in makeup, the drummer is black so he does a headspin at one point. Also he gets his head torn off by the dreads and tossed around, but luckily it re-attaches safely. 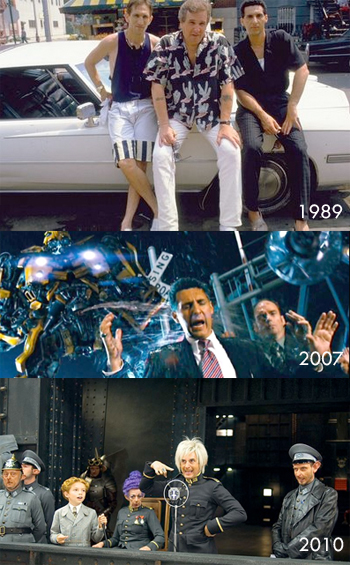 It turns out the nutcracker is actually a prince cursed to be wooden so the throne could be stolen by the Rat King, played by John Turturro in probly the only role he’ll ever do that’s arguably less dignified than being peed on by robots in the TRANSFORMERSes. But at least the character knows what he’s doing. He makes it so his enemy will always have to have nuts in his mouth.

Turturro wears a poofy white Andy Warhol wig and latex rat nose. He lives an extravagant lifestyle. He has a shark tank like Ice-T does, but he electrocutes the shark early on and then it just floats there for the rest of the movie, right side up though so it doesn’t look dead, it just looks like the puppeteer had the day off. The Rat King also has a hobby of photographing crying children, and he has some of the photos blown up huge on his wall. Some of his hench-rats fly in with metal wings and jet engines, and he says, “Ah, my loyal bat-rats!” He has a band who play for him as he sings about “Welcome to a Stygian era!” and “Rat wing policies for all!”

See, that’s the most questionable concept in the movie: the rats are like Nazis. They wear Nazi-esque uniforms and helmets, and are clearly fascists. At some point the Christmas tree has expanded into a bleak, stylized city controlled by the Rat King. The oppressed people cry and pile their dolls and stuffed animals in the streets to be taken away and ground up. There are huge propaganda murals on the walls, including one that says “DO THE RAT THING.” Both a bad pun and a reminder of how far Turturro has fallen.

The ending is as confusing as the rest. They turn the Rat King and henchmen back into rats, and Mary and N.C. (who at this point and in various parts of the movie has turned into a real boy with a totally different voice) stand on a platform pointing them out as they scurry through a crowd. The monkey chases them. “Get him!” He’s trying to stop them from getting away into the sewer… then when they do everybody immediately cheers that they’re gone, as if they weren’t trying to stop them just 1 second ago.

“That was the evil rat king, who tried to turn off our sunlight!” the Prince yells.

Is that what he was trying to do? I honestly didn’t catch that.

This is a gigantic production, with huge practical sets, crowds of hundreds of extras, makeup, puppets and the CGI nutcracker character. Some of the effects are actually kind of cool: the rat stormtroopers have mechanical “rat dogs” on chain leashes, Turturro’s ugly rat-face makeup sometimes gets a digital enhancement so he can open a huge snarling mouth, and in one scene chew through a metal wall. The monkey character is old fashioned PLANET OF THE APES style makeup but then they did sort of a BABE style animation to make him more expressive. There are motorcycles and the jetpacks and a helicopter with robotic chicken legs. Sometimes the rats are in the real world, so they’re animated characters who look like real rats except for one that I think has a Turturro-ish face and makes human gestures with his front legs.

Fanning has turned out to be a really talented child actor in SUPER 8 and SOMEWHERE. There was no room for that in this behemoth, but at the end when they make her leave the fantasy world (what, she’s only allowed to be there when it’s a fascist nightmare?), she cries, and then it turns into a smile, and it’s a sign of how good she’ll be, I think.

I don’t know exactly where the line is drawn between a horrible mess like this and a good one. I like the weirdness of it, and alot of the elements in concept wouldn’t necessarily have to be bad. You could describe the different parts that make up RETURN TO OZ (animal made out of couch and moose head, rock monster, guys with wheels for feet) and I don’ t think it would sound any better or worse than the ones in NUTCRACKER. But somehow it works better as a creepy children’s fantasy. This feels more like SUPER MARIO BROTHERS with its elaborate dystopian world, human-animal-tyrant, broad acting in service of non-jokes, unclear logic or purpose. And SUPER MARIO even had Richard Edson, who played Turturro’s brother in DO THE RIGHT THING. What’s going on here?

Is it possible that THE NUTCRACKER 3D was almost good? THE ADVENTURES OF BARON MUNCHAUSEN is also a big out of control mess about a little girl lost in a fantasy world, and it’s similarly exhausting, but it’s great. I guess it just comes down to taste. The designs are better. The atmosphere is more consistent. The ideas fit together better. The characters are more fantastical, less annoying. It doesn’t have Nathan Lane as Albert Einstein singing a song to a famous piece of music that doesn’t need any damn words.

I don’t know, maybe this should’ve been my submission to the Worst Holiday Movies of All Time. But I don’t regret watching it.

And here’s another great example of how well lyrics go with the Nutcracker suite:

Albert Einstein Andrey Konchalovskiy Christmas Elle Fanning John Turturro Nathan Lane Richard E. Grant
This entry was posted on Saturday, December 22nd, 2012 at 3:16 am and is filed under Family, Fantasy/Swords, Reviews. You can follow any responses to this entry through the RSS 2.0 feed. You can skip to the end and leave a response. Pinging is currently not allowed.

15 Responses to “The Nutcracker: The Untold Story”