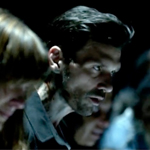 That movie THE PURGE was a little better than I expected. You gotta accept a completely asinine premise (that 12 hours of “all crime is legal” free-for-all every March 22nd would virtually eliminate crime, unemployment and poverty) but I like Ethan Hawke’s dedicated performance and the subtext about living a comfortable life distanced from the savagery we benefit from. These people say they don’t believe in killing, but they believe in The Purge because it’s the American way. U.S.A.! U.S.A.!

Now lo and behold part 2 is better than the first one. Not any smarter, but better put together. Okay, we’ve accidentally bought into this world where The Purge happens, now let’s have a more entertaining story about it. They ditched the home invasion/siege format and deal with people moving through the city trying to evade the mayhem. It’s shot in kind of a digital age noir style with solid yellows and reds often highlighting the spaces between dark shadows. As you drive through the city you pass serious beatings on the side of the road, things on fire, gun battles.The first movie was all about this upper class family hiding out in their house, this one has more variety. It starts out like it’s gonna be a cross-section of how different people in the city deal with The Purge. You got a young, white, on-the-verge-of-breaking-up couple who break down on the highway and get chased into downtown by menacing punks in plastic masks. You have a black mother and daughter whose apartment is attacked by a paramilitary squad. Most importantly you have a badass soldier or cop or something (Frank Grillo, THE GREY, CAPTAIN AMERICA’S WINTER SOLDIER) headed out to seek revenge on somebody. When their paths all cross Grillo feels enough pity to help the others out and try to get them to safety. As long as they don’t get in his way, because he’s not gonna wait another year to kill that motherfucker.

We see more things that could happen during a Purge: family drama turning to murder, rich people who look like the Romneys paying an old sick guy to be their “sacrifice,” the government secretly using it for organized hits, a radical group fighting back, guys in dune buggies driving through the sewers blowtorching homeless people. As they do.

I gotta say, the low income bad guys of the Purgeverse only have slightly better taste in masks than the rich people. They lean a little bit too Juggalo for my tastes. They got a skateboarder and a guy with skeleton makeup. And like the rich boys they are way too self conscious with their head tilting and other scary posing. A real slasher or post-apocalypse berserker would eat these sissies for breakfast.

As a side note, I’d like to brag that I recognized Noel G. as the neighbor guy who had the worst timing to try to rape somebody and got shot up by soldiers after the same lady. Noel G. is a guy who was in THE FAST AND THE FURIOUS, WRONG TURN AT TAHOE, RECOIL and FORCE OF EXECUTION. I was also proud to notice him in a bit part in THE DARK KNIGHT RISES. Way to be back on the big screen, Noel G. 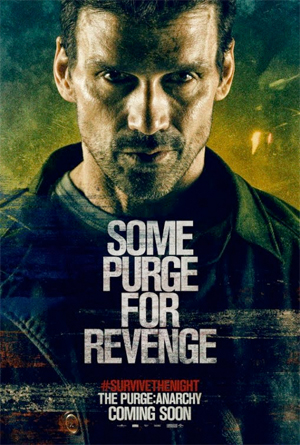 Leading the innocents through all this and making the movie worthwhile is Grillo, who has seemed ready to break out since WARRIOR. Here he’s a good stoic guy with a 5 o’clock shadow, a kevlar vest and alot of guns. There’s some good tension when his passengers ask why he’s out here and he doesn’t answer, which is an answer in itself. Or when a family that takes him in starts complaining about people going out to Purge and he listens but doesn’t respond because he’s trying to figure out a way to politely leave to go out and Purge.

He’s a credible badass, shooting with accuracy, hiding from people, taking a guy out with a sleeper hold. One minor complaint: he shoulda done something besides just drive that badass car before the bad guys took it out. That thing was a beauty, it would’ve been exciting to see it in action and also would establish it as more of a setback when he loses it.

Action coherence-wise it’s got problems – some disorienting fast edits, a fight in the dark – but generally when they have to face down some dudes who pull up with a gatling gun in the back of a semi or whatever it is genuinely exciting. Going a little more action-movie for the sequel was a good idea.

For a while you don’t know what specifically Grillo is getting revenge for. It’s an easy guess that somebody killed his kid, because we see how there was some tragedy that messed him up and ruined his marriage and now his ex-wife is worried about him. But when it turns out to be a son that was killed by a drunk driver it’s a little disappointing. Shouldn’t it be that his kid was killed in a previous Purge and now the dad is revenge-purging? It would show The Purge as an endless cycle of Purgery.

I guess the first one might have a little more substance behind the story, but I can at least say there’s a little bit of heart to this one. Maybe it’s corny but I really liked how much the mother and daughter care about each other. The daughter is constantly asking “Are you all right?” She seems like a nice girl and that gives her some credibility when she tries to tell Grillo to refrain from Purging.

They say this is the 6th annual Purge, and I wasn’t sure but were some of the rules announced at the beginning new? There was something about limits on weapons classes and levels of government who are exempt. I hope some of that was new because then it’s like UFC, who started out saying there were no rules, then added new ones every year.

I bet by now the markets have caught on. There must be big Purge Eve sales at the hardware stores, Recommended Purge Day Binges on cable channels and Netflix, t-shirts that say “I Got the Urge to Purge,” shit like that. Maybe if society won’t wake up to the dangers of this savagery then at least the greeting card industry will ruin it. You know, every year they put the Purge decorations up earlier.

It’s interesting, they say that all crime is legal, but it seems like everybody jumps straight to murder. Surely there must be other legal criminality out there. I mean, I’m glad they haven’t focused on the rapists and child molesters, that would be no fun to watch. And the illegal downloaders would be kinda boring.

But let’s be realistic, not all illegal activity requires Halloween masks. If all crime is legal there should be so much else going on there. If you don’t have medical marijuana where you live, you fucking know there will be so much cataract relief during The Purge! And if you live in one of the 19 states that still have bans on gay marriage then be prepared for lots of weddings on the 22nd. In fact that’s what I think part three, THE PURGE: MATRIMONY should be about. It’s another genre switchup, this time more of a relationship dramedy about a group of people trying to go to the weddings of all their gay friends, but they have to time it right, you know, to get to all of them. There is romance and dancing and drunken toasts, but then when they have to travel to the next wedding you got dudes in crazy masks trying to beat their heads in and light them on fire and what not. And they try not to ruin their outfits or damage the wedding gifts they’re carrying. So it’s got something for everybody.

I look forward to that but for now Part Anarchy is kinda fun. 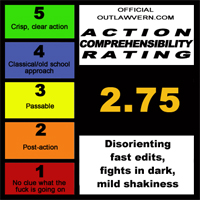 Frank Grillo James DeMonaco Noel G.
This entry was posted on Wednesday, October 22nd, 2014 at 9:13 am and is filed under Action, Reviews, Thriller. You can follow any responses to this entry through the RSS 2.0 feed. You can skip to the end and leave a response. Pinging is currently not allowed.

29 Responses to “The Purge: Anarchy”