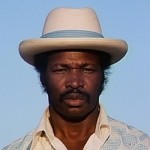 I’m sure most of you motherfuckers know that Rudy Ray Moore is one of the pioneers of independent Cinema, one of the greatest orators of our times and easily the rawest presidential candidate of the last two decades. What you might not know is that in addition to his fine collection of pictures (Dolemite, Petey Wheatstraw, Avenging Disco Godfather, etc.) Mr. Moore has a live concert film in the style of the Eddie Murphy standup pictures he did back when he was trying to copy Richard Pryor instead of dress up in a bunch of funny disguises and fart.

This was released on the “video” cassette format in 1988, the same year that Die Hard hit the theaters. But it looks to ol’ Vern like it was filmed in the early ’80s, not sure about that bud. At any rate he mentions Reagan so it was probaly a little before ’88 in my opinion.

Anyway, Rudy tells a lot of jokes about dick and pussy and he calls out people (obvious plants) in the audience and says how ugly they are. He is best when he’s rhyming, “rapping” as he calls it about the legend of Dolemite, or Shine (the black folk hero who supposedly escaped the Titanic ’cause “he was a swimmin sonofabitch”). When he rhymes, he almost goes into a trance, his neck starts poppin back and forth and he snaps and gyrates and slides across the floor like James Brown, keepin the rhythm.

The other highlight is when he makes his campaign speech for Dolemite. First he says he won’t promise to do jack shit when he’s elected, but then he starts sayin “I’ll have a constitution that will legalize prostitution, and you can bet your sweet ass I’ll legalize grass.” Then people from the audience stand up, “Mr. Dolemite…” and ask questions. “How do you stand on free love?” “I don’t stand on it, I lay on it!” After a while it goes off theme and they start asking questions that don’t make any sense, just to set him up for jokes. But what the fuck man it’s still a PRETTY fucking good routine if you ask me.

Near the end Rudy starts talking shit about Richard Pryor’s freebasing accident. Sorry Dolemite, you may have knocked Saturday into next week but you’re not bad enough to take on Richard in the comedy game. But the main reason why Rude doesn’t hold a candle’s chance in hell to Richard’s live films is because of the direction by Petey Wheatstraw director Cliff Roquemore. Some of the routines are obviously dubbed over with the original album versions, and the audience reactions are obviously phoney. This motherfucker cuts straight from a joke to a bunch of people standing up clapping and laughing their fucking eyeballs out, then he cuts off the sound and goes back to Rudy. There’s a couple parts where the people go nuts before he even gets to the punchline. Richard’s films really gave you a sense of what it must’ve been like to be there, but not this one.

Still, if you only know Rudy Ray Moore from his action films, it’s worth checking out to see where those characters came from and what Rudy was known for (comedy) before he was a Cinematical icon. There is some funny shit on there and especially if you are thinking about voting for Dolemite this year, you might want to find out more about what he stands for and what not thanks bud.

Rudy Ray Moore standup
This entry was posted on Saturday, January 1st, 2000 at 12:13 pm and is filed under Comedy/Laffs, Reviews. You can follow any responses to this entry through the RSS 2.0 feed. You can leave a response, or trackback from your own site.