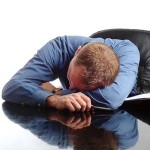 It took me a while to get to this one because 1) cartoons are only for children and 2) it wasn’t nominated for the best animated feature oscar so it must not have been any good. so I watched Jimmy Neutron instead.

Actually that is all bullshit. I know this movie was beloved by critics and people alike. I even talked to one dude who hates all Richard Linklaters other movies but liked this one. As you probaly already know this is a movie that Linklater shot on digital video, then had computer animators paint over the video in their computer programs and turn it into surreal computer art type business. What the plot is about is this kid is dreaming, but he can’t wake up, and everywhere he goes people talk to him about free will or lucid dreaming or show off that they have some wacky quirk like they pretend their car is a boat.

Now let me tell you something. This is a completely original idea for an animated feature and I respect that. The animation style itself is also original and sometimes even looks good. Because of the software tracing over handheld video camera footage the backgrounds end up bouncing around like the whole city is built on the surface of a giant water bed, and everywhere you walk the trees and the buildings and the signs wobble around. Some of these shots, especially walking around on city streets, look stunningly beautiful and are a good totally phoney way of portraying a dream life. (I mean seriously, have you ever had a dream that was anything like this animation in any remote way? Of course not.)

There are also some interesting ideas to ponder in this movie. And some of the acting is good, like the one scene with Ethan Hawke and Julie Delpy. A few of these actors know how to deliver this dialogue and make it sound like they’re actually talking and not just spewing memorized lines. Also some of the scenes obviously are real professors talking about the type of shit that they, unfortunately for us, like to talk about.

I had to get that out of the way because there are things that I can respect about this movie ON PAPER but that does not in any way mean that it wasn’t one of the most insufferable pieces of garbage of the year. I would have to say that despite some good scenes in there, overall I hated this fuckin movie.

Look, maybe you guys went to college, maybe you want to be back there talking to the worst bags of hot air you’ve ever known and consider that a good way to spend 90 minutes of valuable life. But don’t put the rest of us through that. I took a wednesday night writing class at a sort of hippie college so I’ve witnessed these kind of fuckwads firsthand. And I think anyone who has met these people in person knows that they should not be glamorized in cartoons. At this school they have what is called seminar. Everybody in the class is supposed to read about a book, and then they come and discuss it. They talk a little about the book but mostly go off on tangents about subjective vs. objective reality, existentialism, and what happened that week on the simpsons. Well this movie is like SEMINAR: THE ANIMATED MOVIE.

Okay let me give you a different example. I was on the bus and all the way from downtown to my house there was this yuppie talking loudly on his cell phone to a friend who had just gotten back from india. “So tell me all about it! Was it really indian? I mean did they have persian rugs everywhere? Tell me!” He went on and on about did you go out of Heathrow and etc. and tried to make it clear to everyone on the bus that he was intimately familiar with the airports and geography of Europe and was very worldly and etc., although at no point did he demonstrate knowledge that India and Pakistan were believed to be at the brink of nuclear war and that the day before the US had urged all Americans to leave.

Then the other day I went to a party and got into a conversation about THE OUTFIT and then everybody started talking about what Truffaut and Godard do. And the day after that I went to a barbecue and listened to some guys talk about which hotels they’ve stayed at in Vegas, which casinos they felt were used as locations in the movie SWINGERS, which magicians they wanted to see, why the logos for NBA teams symbolize the downward spiral of the sport and why the NFL is the only legitimate professional sports league.

If I had a video camera and taped all these fuckwads talking and then turned it into a cartoon, that might be quite an accomplishment for myself but I would not be cruel enough to release it in theaters and on dvd and expect people to actually watch it. These are the types of conversations a man or woman spends his or her life trying to avoid, except when high. I don’t know if I’ve ever seen a movie before where I felt like I needed to nod politely and try to think of an excuse to leave.

I mean look, if you haven’t seen this movie yet and I’m not convincing you, I have no choice but to pull out the big guns. Here are some actual quotes from the movie:

“I’m beginning to think that it’s something that I don’t really have any precedent for, it’s totally unique, the quality of the environment and the information that I’m receiving.”

“When I say ‘love’, the sound comes out of my mouth, and it hits the person’s ear, travels through this byzantine conduit in their brain, you know through their memories of love, or lack of love, and they register what I’m saying and they say yes they understand but how do I know they understand because words are inert, they’re just symbols. They’re dead. Y’know?” (in the next 10-20 seconds she also manages to use the words intangible, spiritual, communion, and transient.)

“We are all coauthors of this dancing exuberance where even our inabilities are having a roast. We are the authors of ourselves, coauthoring a giant Dostoevsky novel starring clowns.”

That’s not the only entry level pretentious literary reference either. Throughout the movie, people will be talking and slide into “Kind of like, D.H. Lawrence had this idea of two people meeting on a road…” blah blah fuckin etc. Or Philip K. Dick or you name it. A gal gives her idea for an interactive soap opera which comments on “consumerism and art and commodity.” Paradoxes, paradigms, self awareness. And yes, a professor talks about existentialism, fer cryin out loud. If you want to get the part of college that cannot be applied usefully, save your money and just watch this movie.

I’m not trying to say that these ideas are all full of shit or that these people are dumb or that thinking about things in different ways is not ever useful. Although, in the case of some scenes, that would be the truth. I’m just saying, this is a movie that made me want to back away slowly, and not make eye contact. These people are just like the asshole on the cell phone or the dudes who think the NBA logos are too cartoony – they think what they are saying is alot more insightful and impressive to the listener than it actually is. And no amount of fancy computer cartoons can disguise that fact.

You know what would be my idea of hell would be if this movie could follow you around and keep talking to you.

Richard Linklater
This entry was posted on Wednesday, May 8th, 2002 at 6:28 pm and is filed under Cartoons and Shit, Drama, Fantasy/Swords, Mystery, Reviews. You can follow any responses to this entry through the RSS 2.0 feed. You can leave a response, or trackback from your own site.