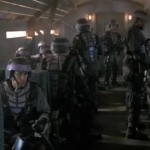 Hey folks, Harry here… I’m so envious of Vern… he’s seen STARSHIP TROOPERS 2 – and while I know it was shot for 3 shiny canadian loons, I can’t help but hope it has more pretty people with vacant eyes being torn to shreds by big bugs! I can hope… right? Here he is…

As promised back when I reviewed WILD THINGS 2: DARK TERRITORY, I have returned with a review of STARSHIP TROOPERS 2: HERO OF THE FEDERATION, a much better straight to video sequel in my opinion. But that’s not saying much. But it’s okay though.

This part 2 is directed by Mr. Phil Tippett, the special effects genius who worked on such other part 2s as STAR WARS part 2, INDIANA JONES part 2, ROBOCOP part 2 and HOUSE part 2. He was also “demon supervisor” on THE GOLDEN CHILD part 1. He has his own studio which did some of the effects in BLADE part 2, in case any of the talkbackers were wondering how I was gonna work that one into this review.

Anyway more importantly Mr. Tippett did the effects for the first STARSHIP TROOPERS and he has also brought back the same writer, Ed “I also did ROBOCOP” Neumeier. So we’ve got some of the same people involved, even if we’re missing the crucial ingredient of Paul Verhoeven, perverted Dutchman.

The story though is scaled way down, obviously. It starts with a big bug battle like in the original, only this time it has a real “yep, you got us, we shot this in a basement in Vancouver” feel to it. Like they got 4 people huddled together trying to pretend they’re a crowd of hundreds. It feels pretty cheap and reminds you of how epic Verhoeven’s picture was, going between a futuristic Earth, various war zone planets and big space battles. Especially since they use a couple clips from the original movie in the opening propaganda reel.

Luckily the cheapie feel goes away when a group of soldiers holes up in an abandoned outpost with a broken radio. This is obviously a set they spent more time building, because they had read the script and knew that was where the whole movie takes place. The troopers are surrounded by the same giant bugs they shot so many of last time around, so you’re thinking okay, this is going to be an ASSAULT ON PRECINCT 13 type deal – in other words, NIGHT OF THE LIVING DEAD with gangsters instead of zombies. Only with giant bugs instead of gangsters instead of zombies.

But soon Tippett and Neumeier throw you in a whole different John Carpenter direction, more of a THE THING type deal. Especially if by THE THING you mean PITCH BLACK + THE HIDDEN and/or MIMIC. I don’t want to give anything away, but I will because what the fuck else am I going to write about. It turns out that one of the soldiers actually has a small bug inside his brain controlling him, and before long these bugs are crawling down everybody’s throats trying to infiltrate the federation troopers and what not.

The reason I mentioned PITCH BLACK is because inside the outpost the soldiers find a dude named Captain Dax locked inside a furnace with the word “MURDERER” painted on the outside. Which in my opinion looks pretty bad. But he explains this is only because he strangled some corporal to death. That’s all. So they let him out to help them fight off the bugs and of course he and a gal, I don’t know her name but she is partly psychic because she is pregnant (long story), they are the main bugfighters in this picture. So it leaves you with many questions to mull over, such as “Which one of these two is the ‘hero of the federation’, I wonder?”

Dax is real honorable and crap so he “gives his word as a man” instead of as an officer. See, he’s “turned his back on the federation” because he’s tired of sending kids off to get chopped in half or brainfucked by giant bugs in an endless, fruitless, meaningless war. If you ask me, Dax has a point. Have you ever tried to go outside and kill all the bees? It just won’t work. You just can’t wipe out bugs. No matter how many bugs you kill, there will always be more bugs. Trying to blow up every last bug would be like trying to blow up the concept of terrorism. As much as we all hate terrorism and giant bugs, it’s time to start looking for solutions other than KA-BOOOOM!

You know how they could stop this war with the bugs? By leaving! What the fuck are they doing flying around to barren planets and bothering a bunch of giant bugs? They’re kicking a hornet’s nest. They should just go home and play that cool version of football they have where they do flips. Or have some more co-ed showers. Mind their own business and the bugs will mind theirs, I bet.

See, that’s the main area where this part 2 is really lacking. It doesn’t have as much of that great satiric tone that only Verhoeven has the skill and/or balls to pull off. It seems much more serious about its sci-fi/horror plot, and when serious things are happening, it doesn’t seem sarcastic, like it would if Verhoeven did it. There are definitely times where I got into it, but that wasn’t as fun as the big stupid grin I had all through Verhoeven’s movie. Some of the actors in this one don’t have much of a presence, but you don’t get the feeling they were cast that way on purpose, like in the original. This one just isn’t very funny. And the new way the bugs are fighting the humans is so different that it almost seems like it should be a different movie instead of a sequel. I liked how you really had no idea what the bugs were thinking or trying to do, other than they liked to cut people into pieces and that the Doogie Howser guy said they were scared at the end. This time, they sometimes put their thoughts into human words, which kind of ruins it. Then they just become your standard evil aliens.

But that’s not to say there’s none of that Verhoeven spirit in there, because that would be a god damn lie. There is a bit of the corny propaganda to open and close the picture, declaring “TOTAL WAR” against the bugs in a new operation known as “the Bush doctrine of pre-emption”, or something like that, I can’t remember what they called it in the movie. And while Dax’s anti-military comments are a little too “on the nose” as they say, they do set up for a good ironic ending.

What makes this movie worth watching though is I guess what you oughta expect from Mr. Tippett: This movie has some good effects. I’m pretty sure they are the best ever in a straight to video type sequel. Yes there are some of the old giant bugs and some people get torn in half and what not, but the real fun comes later on when bugs crawl into people’s mouths or out of their heads. There’s at least one puppet. There’s a rubber severed head that has a computer animated bug crawl out of its mouth – a little bit of country, a little bit of rock n roll. There’s some good gunshot to the head business, throatslashing, finger chopping, some good ol’ dismemberment – always a treat. It’s not as ridiculously violent as the original, but it’s arguably more disgusting. Good job Tippett. Plus there are some boobs, which I know are popular.

The story and characters of this picture are not at all memorable, but there is definitely some imagination involved in the horrible things that happen to these troopers. I would say this is a well above average straight to video sequel, but not on the level of a real sequel. So if you can get into that, have at it. It comes out on June 1st. Remember, service guarantees citizenship.

Confidential to Heinlein nerds: no, there is no magic robot power suit or whatever it is you say the book was about. You may begin whining now.

My name is Vern and I approved this review.

DTV DTV sequels siege movies
This entry was posted on Thursday, March 25th, 2004 at 2:27 pm and is filed under Action, AICN, Reviews, Science Fiction and Space Shit. You can follow any responses to this entry through the RSS 2.0 feed. You can leave a response, or trackback from your own site.