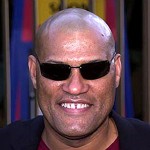 This one’s from ’92 and I guess it’s most famous as the movie that introduced the world to Snoop Dogg. Not as an actor, but the young Snoop is “introduced” on a Dr. Dre song that plays on a stereo in the movie and then on the end credits. But this is a pretty good one, a serious undercover cop movie directed by Bill Duke, made memorable by a great performance by Mr. Laurence Fishburne.

Laurence plays one of those straightlaced cops whose dad was a junkie shot in front of his eyes and ever since he’s walked the straight path, stayed 110% clean and fought to clean up his community, stop the drugs, etc. Against his better judgment he signs up to become an undercover cop, working for a sleazy white fuck, looking the other way when people are murdered and selling drugs to kids and pregnant mothers – all because of the carrot at the end of the stick, the chance to bust a guy near the top of the pyramid bringing drugs into the country. But not the guy at the very top, a politician, because that guy’s off limits.

In every movie about an undercover cop, alot of the same shit is definitely gonna happen. But if it’s done well, you’re gonna make me a sucker. It’s just like a con-man picture or a revenge picture. We can see the same shit over and over but if the execution is good enough, that’s what we want.

Obviously we all know where this story is going. He builds a relationship with the criminals he’s working with, and even a sleazy lawyer/drug kingpin played by Jeff Goldblum becomes somewhat likable. He gets his hands dirtier than he wants to, kills people and regrets it, even starts snorting coke. He ends up becoming disillusioned with the phoniness and corruption of the DEA, saying that he thought he was a cop pretending to be a drug dealer, but was actually a drug dealer pretending to be a cop. (I liked that line but I doubt this was the first movie to use it.) So he quits the force but is so entrenched in the drug dealing that he has to continue, until he can pull a badass Superfly type move and turn the tables on everyone. The kind of fuck–you that Vin Diesel should’ve pulled at the end of XXX instead of just selling out and lounging on a beach.

The secret to this picture is Fishburne, after he changed his name from Larry but before he was Morpheus. We haven’t seen him in too many movies since he started the Matrix movies (MYSTIC RIVER and BIKER BOYZ are the only two I can think of off the top of my head) but the dude is always good. Here he uses that quiet Furious Stiles righteousness to full advantage. It’s all in the intense look on his face. You can see why he’d be cast as the badass leader of a rebellion. He seems so good and honorable and scary at the same time. At any moment he could pull out his gun and/or give you that lecture about gun shops and liquor stores on every corner in the Hood.

My only complaint about this picture is the music. The Dr. Dre song is great, but the rest of it is on the cheesy side. It’s from that period when a director might think hey, I should have a hip hop score for this thing. So instead of going to the RZA like Jim Jarmusch did for GHOST DOG: BEST MOVIE EVER, they hire some 50 year old white guy with a grey pony tail and give him a couple CDs to listen to for reference and see what he can come up with. (I don’t know if that’s really the case, but that’s the impression.) It’s not terrible, it’s just the least convincing part of the movie.

Otherwise though Bill Duke, famous supporting cop actor, brings everything off strong. Fishburne does some dark, growly narration that gives it a sort of neo-noir type feel. And it’s got a little more of a political edge than usual, with references to Noriega, corrupt politicians funneling drugs into the black community and black on black crime. I liked this one, I’m glad it was recommended to me.

Bill Duke Jeff Goldblum Laurence Fishburne
This entry was posted on Thursday, June 10th, 2004 at 6:39 am and is filed under Action, Crime, Reviews, Thriller. You can follow any responses to this entry through the RSS 2.0 feed. You can leave a response, or trackback from your own site.