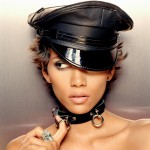 Well I picked this one up ’cause there was alot of hype, it just won a bunch of awards recently and they were making a big deal about Halle Berry showing up and making a tearful speech. Somebody warned me though, turns out “the razzies” are some kind of sarcastic or ironical type award where they give it to the WORST movies, or at least the ones that are not really the worst but that got a bad time in the media and they probaly haven’t even watched them but they pretend it’s the worst and everybody has a good time pretending that they have seen it and that they were surprised how bad it was.

So I realized this was actually a notorious movie, a legendarily bad movie, and I started to worry. What if I like this one? What if I’m the one guy? You know how I am, I tell it like it is. I say what’s what. I kind of liked The Punisher and I shouted it to and from the god damn roof tops. To this day I would die for the two Charlie’s Angels movies, or if not die, then at least admit that I enjoyed both of them alot. What if this is actually a misunderstood work of camp genius? Am I really ready to go to bat for Halle Berry wearing a big leather football with ears on top of her head?

The expectations killed this movie though because it’s not misunderstood and it’s not bad in any kind of interesting way. It’s just your usual unimaginative movie but one with the unusual topic of a gal dressing up as a cat and getting super powers.

The plot is this. Halle Berry is an awkward shy person working in the art department at a makeup company run by Sharon Stone and her openly evil husband, played by some guy with an evil British accent. They are about to unveil their new product Beauline, an amazing new anti-aging cream. It actually “reverses the process of aging,” but also has the side effect of rotting your face away like a zombie or turning your skin into super powered rock skin. Unfortunately, the former side effect is only shown in tests and the latter only on Sharon Stone, and then she doesn’t really use it for much.

Anyway Halle accidentally discovers the problems with the product so they dump her in a giant machine that spews her out with the toxic sewage and kills her. Fortunately, a magic CGI Egyptian cat named Midnight has been following her, so it finds her body in the mud, breathes magic Egyptian cat breath into her, resurrecting her as a new magic cat person who adopts all of the qualities and abilities of real cats: flying, using whips, doing Brazilian martial arts, hissing, and eating sushi really fast.

To be completely fair, the scene where she’s revived is actually a pretty good little chunk of filmatism though, in my opinion. I would normally be against a computerized cat (read my review of Garfield for more on this topic) but this one is put to good use because it allows for some very dramatic photographing. The camera flies around and ends up right in front of and beneath the cat as it ritualistically marches up and mounts the corpse and does magic mummy CPR. Alot of people don’t know this but in addition to water and dogs, cats are also afraid of movie cameras. There is no way you could rig a camera to do that shot with a real cat. The only way you could do it is animation, like this, or getting a real cat to wear one of those Polar Express motion control suits and adding the camera moves in later. Or, I guess if you were doing that anyway you could dump the real cat and just have Tom Hanks play the cat. But this was better.

Anyway, the lighting and the camera movement and the music and the genuine trained cats that circle in all make for a pretty weird, nightmarish scene and as Halle woke up caked in mud hearing seagulls flying overhead I realized this was gonna be pretty much the only part in the movie that seems like it’s directed by Pitof. Despite assumptions people have made, Pitof is not some hack MTV director, he is simply a French special effects genius who was born cursed with a blank last name, like Prince or Yoda. He worked miracles on The City of the Lost Children (remember that computerized flea?) and his first movie as a director was Vidocq, a very stylized, all digital super hero/detective movie that is more like what you wish this was: a clever, stylish and thrilling, if completely empty and substanceless, summer “popcorn movie” type of deal.

There’s also a part where the cat shows her how to escape a jail cell by squeezing between the bars. That was pretty cool.

Now, I did my research for this one, I talked to a couple of topnotch nerd insiders who have not only seen the Batman movies, but remember them. According to my guys, Catwoman is sort of a spinoff of Batman part 2, which introduced Michelle Pfeiffer as Catwoman. And apparently in that movie Michelle also was a timid low on the totem pole worker (or “mousy secretary” they all said) at a corporation who discovered insidious plans and was murdered by the boss and then was revived by cats (not CGI though) who circled around her and bit at her. There is some disagreement but the majority believe that Michelle Pfeiffer Catwoman was not literally brought back to life by those cats, but just awoken from unconsciousness, and that the cat powers and “nine lives” she gets after that are more her little gimmick and not meant to be taken literally. In this new version though she might as well be bit by a radioactive cat because she keeps turning into a computerized Halle Berry and soaring above the city like Spiderman. And we find out that there have been many catpowered catwomen throughought history, who wore cat masks and hated dogs, etc. No mention of Michelle Pfeiffer but it would seem this must be related somehow. Also my guys want me to mention that there is no mention of Batman, Gotham City, Superman or even Popeye or Tom and Jerry.

The script, credited to a whole bunch of people and probaly based on a bunch of rejected scripts developed over the past ten years, doesn’t spend much time being clever or smart. Underneath the polished photography and decent production values, this has the feel of a straight to video sequel plot. Just a rehash of the cartoon feminist themes from Batman part 2, but with a different Catwoman, a different corporate villain and a handsome cop (Benjamin Bratt) in place of Batman. It still all feels very familiar and once again you’re wondering how the fuck a guy could date Halle Berry and then see her with a mask only covering her nose and hair, and not have any idea it’s the same girl.

There are lots of annoying cliches here, like the “funny” slightly overweight best friend who encourages Halle and lusts after any man that makes the mistake of standing within ten miles of her. Also the “funny” cartoonishly gay friend at work, you’re gonna love him. And the old “she’s an artist but she is stuck in this commercial job and how will she ever be a real artist like she always dreamed” plot, although they must’ve cut most of that out in the twenty-seventh draft because it is completely abandoned after the beginning and in fact I don’t think you even see her ever doing any art other than in the deleted scenes on the DVD.

There’s another deleted scene on the DVD where she gets chased by a bunch of evil dogs (probaly the yin to the yang of the magic Egyptian cat brigade) through a junkyard labyrinth. The scene reminded me alot of a scene in that old Renny Harlin classic NIGHTMARE ON ELM STREET PART 4 THE DREAM MASTER. And strangely enough, one of the stars of that movie, Brooke Theiss, has a bit part as “ferris wheel mom.” Which only goes to prove my theory that all modern cinema was birthed from the womb of the Freddy pictures.

But there was one little touch I thought was worth commending. It happens when she’s doing internet research on catwomen, as happens in all modern movies of every genre. This movie has the usual computery blips and bleeps when they use computers, but I liked that at least when she does her research, she doesn’t IMMEDIATELY find exactly the information she needs. First she clicks on a page of old ladies who take pictures of their cats dressed up in clothes. That was a good touch.

Halle Berry Pitof Sharon Stone
This entry was posted on Thursday, March 3rd, 2005 at 4:35 am and is filed under Comic strips/Super heroes, Reviews. You can follow any responses to this entry through the RSS 2.0 feed. You can leave a response, or trackback from your own site.