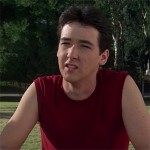 I was excited about this at one point, but I missed it when it was in theaters. I thought it was a diamond heist movie starring Billy Bob Thornton, but it turns out Billy Bob is the co-star and there are no diamonds. The ice in the title is literal, because it’s winter. Christmas Eve, to be exact. There’s not snow though, just frozen rain, which is not something you see in Christmas movies very often, and rings true to me since here we’re lucky to even see that. (I don’t know about Kansas.)

It’s not exactly a heist movie because like RESERVOIR DOGS or something you never see the theft itself. John Cusack (the rich man’s Scott Baio) is a Kansas mob lawyer and Billy Bob Thornton (ON DEADLY GROUND) is his partner in skimming. They have just stolen upwards of $2 million from their boss, but can’t leave town yet due to the ice. The movie is about them trying to hang out and play it cool for a few hours before they can leave. They figure the boss won’t know about the missing money until they’re gone, but this seems to be incorrect since Cusack keeps seeing an enforcer played by Mike Starr (ON DEADLY GROUND) going around town looking for them.

I like the sort of rambling feel of the story, since it’s about killing time. Before the guns come out and it turns into more of what you expect from a crime movie, the plot seems kind of random. Alot of the movie is spent with him having to look after his drunk friend (Oliver Platt, EXECUTIVE DECISION), who is also married to his ex-wife. We find out that he has two kids – a daughter who misses him and a son who hates him. He only sees hiw own children on Christmas Eve by coincidence. He happened to be in the same restaraunt as drunk Oliver Platt and roped by the management into driving him home. This sad family life to me was the most interesting part of the movie because at first he seems like a reasonably cool guy, but then when you find out about the kids he neglects you wonder what the fuck his problem is. Later on, in the middle of the night, he buys his kids cheap ass Christmas presents at a convenience store. True, he doesn’t have the stolen money at this point, but you still gotta figure he’s being an asshole. Even a legitimate lawyer oughta be able to afford something decent a week before the big robbery is planned. He tells his daughter he’ll see her on Christmas and his son says he’s lying. I figured because this is a movie he really would make an effort to show up, but it’s more true to life than that. He is lying. He’s leaving town.

One problem I had with the movie is that I didn’t really understand alot of the details of the situation. Cusack is a lawyer and passes as a respected member of the community, but he also seems to run the strip club he goes to since he’s able to comp people for drinks and tell the dancers they don’t have to pay the stage rental fee because it’s Christmas. I wasn’t really sure what the deal was with that. Also, they say that Billy Bob’s job is he sells pornography, but I don’t really understand what exactly his job is. And once it’s clear that things are dangerous in town I’m not sure why they don’t leave right away. I’m sure driving on icy roads is safer than getting shot at by Mike “I need time to change” Starr. Also, there’s this whole subplot about grafitti that I don’t understand the significance of at all.

I feel like I shouldn’t be complaining about that, because I prefer movies to not explain everything and let you figure it out yourself. But in this case I guess I just wasn’t smart enough. So dumb it down next time, fellas.

I got mixed feelings about John Cusack. He’s obviously a good actor and a charming dude, and he has above average standards for a Hollywood actor. He’s not in too many movies that are completely horrible, except for fucking CON AIR. (I won’t comment on his recent slew of romantic comedies since I won’t ever watch them. For all I know they’re masterpieces.) But as good as he is – and he’s fine in this movie – I’m not completely sold on him as a criminal. He just has such a America’s Favorite Nice Guy quality that it’s hard to accept him holding a gun in one hand and a suitcase full of money in the other. I mean he looks good in expensive suits which is important to this type of role, but still. There’s an indefinable something that doesn’t quite click for me.

And the movie is kind of the same way for me. There’s nothing really wrong with it. There’s some good black humor and awkward social situations here and there. It has a somewhat original feel. Billy Bob is great as always, and some of the scenes with drunk Oliver Platt are pretty funny. There’s some nice photography in parts. It’s almost entirely devoid of the type of wackiness and whimsical scoring that some directors would use to ruin a movie like this. And like I said I liked the way they handled his fucked up family life. But in the end, it doesn’t really add up to much. It’s a mostly serious movie but it doesn’t feel like it has any substance. When it ended, I really wasn’t sure what exactly the story was supposed to be about, or why they wanted to tell it.

I guess a gotta blame the slightly-above-averageness of director Harold Ramis. If I was gonna choose a Ghostbuster to direct a movie, he would be my number one choice. But if I was allowed to open up the field to non-Ghostbusters, he would be alot lower. Sometimes I get him mixed up with the guy who used to be Yoda who directed THE STEPFORD WIVES and shit, and that’s not fair. Former-Ghostbuster is a much better director than former-Miss-Piggy. But that doesn’t mean he’s a genius.

Also I should probaly note that I heard Elvis Mitchell interview Harold Ramis about this movie, and Elvis thought it had all these parallels to Buddhism. I’m pretty sure I didn’t pick up on any of that stuff at all, in any way. So maybe it’s over my head. But probaly not.

So I guess it’s what you expected: not great, not bad, not very memorable, not actually about Buddhism. Maybe they shoulda thrown R. Lee Ermey in there somewhere so it would be more of an ON DEADLY GROUND reunion and then it would’ve stood out more.

Christmas Christmas crime heists John Cusack
This entry was posted on Wednesday, April 5th, 2006 at 4:33 pm and is filed under Crime, Reviews, Thriller. You can follow any responses to this entry through the RSS 2.0 feed. You can leave a response, or trackback from your own site.

4 Responses to “The Ice Harvest”