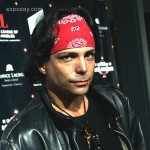 Back in 2001, long before he ever challenged me to a wrestling match, CHAOS director David “The Demon” DeFalco wrote an action movie called POINT DOOM. It’s directed by a guy named Art Camacho, who was in HALF PAST DEAD and directed a bunch of Don “The Dragon” Wilson movies. The producer is the same guy from CHAOS, here credited as Steven Jay “Bernie” Bernheim. It was sold as a Blockbuster Video exclusive, which I’m sure everyone involved was very proud of.

This is a terrible movie, but it has its own style of craziness and ineptitude that to me makes it much more interesting (if less competent) than the straight up rehash of CHAOS. It has a distinct ’80s retro L.A. sleaziness and an insulated world view that makes you wonder if these people only know cliches or if they are shut-ins who live in a strip club before. I think Grieco is supposed to be a straight-up hero, not an anti-hero, but it’s hard to imagine who would find this chump sympathetic. And the females in the cast have the gravitas of BAYWATCH stars. Almost everybody in this movie is a talent agent, a biker, or an employee of a strip club. The only exceptions are Ice-T (gangster, but not biker) and Angie Everhart (sister of strip club employee).

And yes, this is an All-Star DTV Hall of Famer lineup we’re talkin here: Richard Grieco. Ice-T. Andrew “Dice” Clay. Angie Everhart. Zach Galligan from GREMLINS. Sebastian Bach of the ’80s rock band Skid Row. Even a special appearance by The Demon himself, but credited as “Bobby Young.” (Turns out as Bobby he’s acted in a few softcore movies like FEMALIEN and LOLIDA 2000.)

Grieco is the hero, Rick, a rich Hollywood talent agent with spikey hair, a big white collar and a fancy convertible. If you are too young to remember him on 21 Jump Street, just picture Ben Stiller with 25 face lifts and convinced he’s some kind of heart throb. One day while visiting his friend Frankie (Andrew Dice Clay)’s strip club he falls in love-at-first-sight with the Playmate-type blonde Stephanie (Jennifer O’Dell) who serves his drink. Frankie tries to warn him that she is the girlfriend of a guy from the Satan’s Slaves Motorcycles and Drugs Society of America and therefore bad news. But he keeps making googly eyes at her and follows her around and it’s supposed to be sweet so somehow she figures out that he’s not just a sleazy cheeseball agent guy hitting on her at the strip club where she works and that in fact she should risk her life to leave her boyfriend and go to the beach with him. There is a montage where they laugh and piggyback and go on a swingset.

Well it’s probaly for the best because her boyfriend Blackie (John Enos III) is bad news. She knows he’s jealous and she doesn’t like how he beats up her sister (Angie Everhart) and knocks her on the ground causing epileptic seizures. They say she has to take care of her sister because she’s epileptic, which seems kind of weird. But for a while Everhart seems like she’s supposed to be retarded, it’s kind of unclear what’s going on there.

Even if he didn’t beat up retarded epileptic girls, though, Blackie would still be suspect because he hangs out with a bad crowd. For example, in the opening scene he is accompanied by two long-haired heavy metal themed henchmen named Slim (Sebastian Bach) and Speed (David Bobby “The Demon” Young DeFalco). I have to admit, I have grown kind of fond of The Demon, and I was happy to see him here. Without the Marilyn Manson contacts in he has kind of a tough look, he pulls off the henchman thing. Bach is much less convincing though and his death is a highlight of the movie. His car explodes and just so you know he’s still inside they awkwardly dissolve a shot of him screaming over the shot of the fiery explosion.

Those two die early so Blackie’s new best friend is the menacingly named Spider, played by Zach Galligan. Spiders are evil so that’s why his name is Spider, however he is not evil enough to be named Chaos, that’s why that’s being saved for a later more brutality oriented movie. He’s still got that boyish face but he wears a denim jacket with the sleeves torn off over a leather jacket, so you know deep down inside he’s some kind of a tough guy.

I feel bad asking for the poor dude to be typecast, but you gotta be aware of your limitations, and one of Zach Galligan’s limitations is that he cannot be believable as a drug selling rapist biker tough guy. Don’t worry, it doesn’t have long horrible rape scenes like CHAOS. But Spider and Blackie each have a scene where they try to rape somebody by saying “All right then, we’ll do it the hard way,” and reaching for their zipper, but then they get beat up. In Spider’s case, he gets hit over the head with a bottle, then yells “GOD DAMN IT!”

The main conflict of the movie is that Blackie gives Stephanie a bag of money and drugs that he’s trying to steal from the Satan’s Slaves. He tells her not to look at it, so you can’t blame her for being involved. There is no possible way she could reasonably be expected to know that it’s not just some sporting goods or some laundry in there. Unfortunately her unemployed retarded epileptic model roommate sister accidentally packs the loot in their trunk when they’re going to the beach, thinking it’s their beach luggage, I guess. Beach towel, sunblock, sand castle kit, etc. So Blackie ends up thinking they are trying to steal his money and everybody else finds out Blackie is stealing it from them and then there’s shootouts and shit.

Although director Camacho did a pretty good job as action coordinator for HALF PAST DEAD, these shootouts here are probaly some of the worst I’ve ever seen. People just stand and fire guns, nobody ever aims, rarely hits and almost never covers themself. They just stand there in the open and I guess since there are hundreds of bullets fired that don’t hit anybody, you can understand why they’re surprised when they finally do get hit. The junkyard shootout with Ice-T must be seen to be believed. Especially the part at the end where the guy who killed Ice-T (a bald tough guy with a goatee, looks like the guy from CHAOS, but I’m not sure if this character is “Tiny” or “Ice”) glances for 2 seconds at some papers inside Ice-T’s car and then declares that they killed the wrong guy.

The dialogue, of course, is exactly as good as the action. People keep saying phrases that don’t quite make sense, things they would only say because they heard them in movies and thought they sounded dramatic. When Stephanie brings the Satan’s Slaves the stolen loot the Tiny/Ice guy angrily says, “You got 2 minutes to tell me where you got this stuff.” What the hell? Why two minutes? Even if he was gonna set an arbitrary deadline for the time in which she should explain why she did them a huge favor by betraying her boyfriend and bringing them their stolen money and drugs, would he ANNOUNCE what that time limit is?

The movie gets really silly when Mr. Grieco goes to meet Blackie on the beach in the middle of the night to settle things. Dice Clay is there for backup and is wearing a giant, poofy leather hat that looks a little bit blaxploitation, a little bit Milli Vanilli. The good guys get ambushed but ultimately Blackie ends up beaten, shot and hit by a car twice. But he wakes up still on the beach the next morning and the bag of money and heroin is still there. Thank God nobody has ever used this beach before, otherwise some Grandma looking for sand dollars would’ve gotten a whole bunch of free dope. The bald Ice or Tiny guy shows up, parks his motorcycle and confronts Blackie:

“I wouldn’t’ve believed it if I didn’t see it with my own eyes. You robbed and murdered your own brothers. And for what? Drugs? Money? The Satan’s Slaves is a brotherhood – you FUCKING ASSHOLE!”

Then, like the end of RESERVOIR DOGS, like the end of CHAOS, like the dark underbelly of reality, in the spirit of nihilism and the L.A. County Coroner’s Office and the doorway to true evil, they shoot each other at the same time.

But everything ends happy with Grieco, Dice and the girls smiling and having fun on the same damn beach (Point Dume, no relation to the title) where all this went down. They are not worried that they have murdered a bunch of people or that they have arguably crossed a deadly biker gang. I mean, what consequences could there possibly be? And apparently nobody has noticed the two dead guys with the motorcycle and bag of money and heroin parked in the sand. Is this a private beach?

Man, the beaches we have up here aren’t even real beaches, but they got park rangers walking up and down all day swiping beers from kids and writing citations for bonfires. Down there they not only get a real beach, they can leave dead bodies and bricks of heroin laying everywhere and nobody hassles them at all. They’re so laid back there, it must be nice.

The last shot is Grieco and Stephanie kissing, and the camera slowly pans across the sand and water… I thought it was gonna show the dead bodies still laying there, but all you see is Blackie’s sleeveless denim jacket floating away symbolically. What a romantic visual poem: the retard-beater rapist washed away by nature, leaving the Playboy bunny with the smarmy spikey haired talent agent/stalker. Maybe The Demon isn’t all that evil after all.

Andrew Dice Clay Angie Everhart Art Camacho David DeFalco Ice-T John Enos III Richard Grieco Zach Galligan
This entry was posted on Sunday, October 1st, 2006 at 10:02 pm and is filed under Action, Reviews, Thriller. You can follow any responses to this entry through the RSS 2.0 feed. You can leave a response, or trackback from your own site.

One Response to “Point Doom”