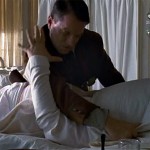 I know we got some home theater buffs out there, right? Let’s say you have an HDTV, a Blu-Ray player, 5.1 surround (or whatever the best is these days), the whole setup. How do you feel about using all that to watch a guy eat monkey brains?

What I’m getting at, my friends, is that FACES OF DEATH came out on Blu-Ray and a new 30th anniversary DVD earlier this month. I don’t think Harry covered it in his column, so I thought I would give my thoughts on this important event.

As you know, FACES OF DEATH is one of those movies with a reputation so vile, so putrid that it’s not even thought of as a movie. It’s just a tape. A tape more hated than BATMAN AND ROBIN or MEET THE SPARTANS – one most people are disgusted by without having necessarily seen it. Like I SPIT ON YOUR GRAVE only worse, because it has REAL DEATH IN IT!

After 30 years of making people feel dirty it’s still a legend. In video stores that will carry it it’s a perennial favorite. I asked about it at one store and they said if someone comes in and gets a membership to rent once and never comes back then chances are the movie they came for was FACES OF DEATH, or one of its imitators like TRACES OF DEATH, FACEZ OF DEATH, PHASES OF DEATH, FACES OF DEAATH, or THUMBCES OF DEATH (the one where Steve Oedekirk’s thumb gets scratched by a bear claw). I was curious about its popularity after Gorgon Video (secretly Dark Sky, I think) sent me a review copy on Blu-Ray, and I wanted to know how this was possible. But I guess if it’s a bigger renter than THE WIZARD OF OZ I get it, the movie is an automatic money maker. And since Dark Sky is already getting into Blu-Ray for THE TEXAS CHAIN SAW MASSACRE, they might as well put this one on that format too. If Blu-Ray does replace DVD they’ll have the monopoly on providing the Blu-Ray that scumbags steal from video stores, and they can use those profits to put out more obscure movies like THE GLOVE that probaly aren’t as big of moneymakers but that need to be provided for America particularly in a time of economic struggle when the activities of John Saxon and Rosie Grier mean most to us.

I didn’t really feel like watching a dude eat monkey brains, and luckily I don’t have a Blu-Ray player anyway. But I made the mistake of telling Dark Sky that, and they sent me the DVD. It it was just sitting there, that spooky skull on the cover. I couldn’t help it, I got curious.

And HOLY SHIT I cannot believe people have been saying for 30 years that this shit is real! I can only guess that’s because nobody has really seen it because it was stolen from their video store. Sure, there’s plenty of real stock footage of disgusting things: heart surgery, slaughterhouses, seal clubbing, a plane crash, WWII. But the main scenes of the movie – alligator attack, bear attack, shootout, execution, cult that eats a dude’s organs and then has an orgy, and yes, the legendary eating of monkey brains – make DIARY OF THE DEAD look convincing. Who are these people who watched this bullshit and thought it was reality? Do they also believe the premise of the movie, that the narrator “Frances B. Gross” is a doctor who travels around the world learning about death in different cultures? He keeps talking about his impressions on that day, what the police told him afterwards and all this shit, but of course he’s never even there in the footage. I guess maybe he’s one of the cameramen. Maybe he has a press pass. Otherwise what’s he gonna say, “Excuse me officer, I’m a doctor who travels around the world learning about death, could you explain to me what went through this man’s head before he murdered his family?”

Don’t get me wrong, I’m glad it’s not real. Makes it watchable. The bear attack is pretty funny – he explains that 2 separate groups of tourists came across a bear at the same time, and both happened to have movie cameras (with film – this is pre-camcorder) rolling. They’re feeding the bear, suddenly he stands up and they start screaming OH MY GOD!, then both cameras shake while the bear supposedly kills the guy off screen. I guess neither group of tourists knows how to get good coverage of a bear attack. (Also, all of the dialogue is clearly looped in most of these scenes. Which makes sense since I don’t see any microphones in the footage.)

Another good one is the alligator attack. First a news reporter (apparently on his first assignment, since he seems like just some dude who is not a news reporter) talks to a lady about how she saw an alligator in this lake and her daughter is afraid to swim. Then some rangers come up in a boat and ask if she is the lady who reported it, and where is it, and she points “over there.” The boat goes over, the guy falls off, and is eaten by an off screen alligator while all the cameras shake. (or it could be an underwater bear, not sure.)

And yes, I’d have to say that my favorite scene, if that’s the right word, is the monkey brains. You know how they have those gimmicky restaurants where they cook all the food right in front of you, or they deliver it to you on a conveyor belt or an electric train, or something goofy like that? This is about an exclusive restaurant somewhere in the Middle East where they bring out a live monkey and let you crack its skull with a mallet and eat its brains. We watch a group of American tourists delight in the novelty of killing a monkey and eating its brains to absorb its life force. To me it comes across like a satirical statement, that these bourgeois tourist fuckers will treat a monkey like fondue for a little amusement. Isn’t it neat to try different customs? What fun! It kind of reminds me of that scene in HOLY MOUNTAIN where the busload of tourists takes photos of the peasants being killed by soldiers.

This isn’t really what I expected. I guess I always pictured something more blatant. Like, “Hey, look at this footage of somebody jumping off a building. Hey, what about this, a bear eating a guy. And an alligator eating a guy. Hey, and here’s an autopsy. What else you wanna see?” Just morbid, sicko shit like those “Banned From TV” ads they used to show that were pretty much snuff films edited for television. But the feel of FACES OF DEATH is more like those old driver’s ed movies that work in real fatality footage every once in a while. You question the mental health of the filmatists responsible, but believe they really think they’re making some important SCARED STRAIGHT type of documentary. The movie was actually made for Japan, and I don’t think they ever foresaw the American release or, more importantly, the home video market. Dr. Gross doesn’t seem to think anybody’s enjoying this. He decries war, contemplates vegetarianism, vows never to wear leather or fur on his back, disagrees with capital punishment. And the movie ends with the Faces of Life: a woman giving birth, a deer, pretty flowers, slow motion running on a beach, all set to a corny ballad. Not what I expected. I wonder what the people who stole the video thought of that part? Maybe they weren’t sickos after all, maybe they just stole it to remind themselves that death is just one part of a natural cycle. And they like that hippie song “Jesus Doesn’t Live Here Anymore.” I wonder if they released a soundtrack to this?

I don’t believe this is a good or enjoyable movie, and any clean fun from deconstructing the re-enactments is dampened by the real footage of post-plane crash gut piles or bodies in a morgue. (By the way, what happened to Demon Dave and the movie he was making with that coroner guy?) But I’m glad I watched the movie and finally understand what the fuss is about. This new DVD is spectacular because it explains what the deal is. Some might think it’s like that asshole in the mask who revealed how magic tricks are done, but I think it’s more like pro-wrestling in the past 10 or 15 years being more open about being a show. There’s a really interesting director’s commentary and featurettes on the editor and the effects team. They all seem pretty normal and non-sleazy and between them tell the story of how the movie came about and how they made it.

If you ever saw this movie or wondered about it, this new version is filled to the brim with interesting facts. The monkey brains are cauliflower and gelatin, and are supposedly based on a real place in Asia, but the Japanese investors made them change it to the Middle East. The Mexican dogfight is actually two pitbulls in California playing around with fake blood. The director plays the famous French assassin and one of the cops in the shootout. There are many stories about the people involved in these fakeries encountering people who swear they are real or that they know someone who knows someone who was there. The actor who played the executed rapist apparently called in to a talk show to tell them FACES OF DEATH was fake, but nobody believed him. The director also mentions that the footage of the seals was from a previous nature documentary he had done, and in that context it was acclaimed. Not so much in this context.

Ironically, this behind-the-scenes treatment might kill FACES OF DEATH. It might take the legend and put its head through a specially designed table and crack its skull open with a little mallet. What self-respecting degenerate is gonna seek this one out knowing it’s not as real as the shit he’s seen on Youtube? Plus he has those BUMFIGHTS tapes he stole and those still do it for him. I don’t know, it might be like when HEAVY METAL finally came out on video and overnight went from legendary lost masterpiece to movie nobody gives a shit about. Even if that’s the case, I think Dark Sky/Gorgon/whoever has done the right thing. They’ve turned FACES OF DEATH from ugly low life legend to interesting piece of film history.

This entry was posted on Friday, October 17th, 2008 at 7:34 pm and is filed under AICN, Horror, Reviews. You can follow any responses to this entry through the RSS 2.0 feed. You can leave a response, or trackback from your own site.