The Mystery of Bearded Harold

Not too many people use Hotmail these days, so I don’t know if any of you guys’ve seen these before, but there are a series of strange ads that show up on the Hotmail pages alot.

The second thing you’ll notice about these ads is their weird tendency to word their sales pitches like propaganda, as if your country is telling you it’s your duty to use whatever their service is. But the first thing you will notice is the crazy ass photos they choose to represent the sort of person they are trying to sell to – i.e. you.

At left is the first one I noticed, and I think you probly have some of the same questions that I do:

What’s up with that? Who is that man with the giant nerd glasses and cartoonish overbite? Why does his face have the waxy look of a caveman dummy at a history museum? Is he organic or digital? Why does his open collar and string necklace suggest a laidback, comfortable surfer dude when his head looks like a hideous monster? Is that a fake nose, and if so is it attached to the glasses? What does he want from us?

I mean, this is weird. Somebody made this ad, and somebody purposely chose that picture to appear on that ad. What were they trying to make us think? Who was he supposed to represent? Is he one of the 9 out of 10 homeowners who fail to take advantage of government refinance plan? I don’t think so. Judging from his smile he must be the tenth guy, the guy who succeeds to take advantage of government refinance plan. That means he’s the person who is supposed to respond to this ad. That means he’s us. He’s how they see us seeing ourselves, isn’t he?

Well, that ad always confused me, but it got even weirder when they started using the photo of the longhair. Check this shit out: 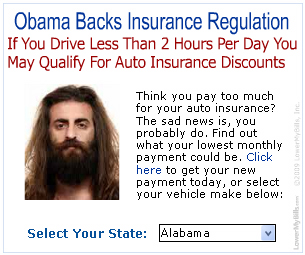 How do I put this? Oh, I know: WHAT IN FUCK’S NAME IS THAT?! Why do they think that face will attract us to whatever it is they’re advertising? And what does Obama have to do with this? Is this an ad, or is it really some kind of psy-ops disguised as an ad, trying to brainwash us to be against Obama? Probly not, because it seems like they also made a version for people who feel negatively about the name Obama: 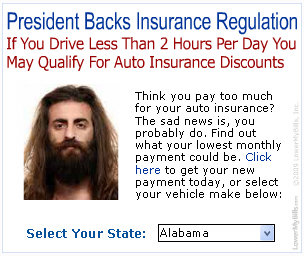 See, it doesn’t have to be Obama. It could just be President.

The creepy bearded guy represents more than just cheap auto insurance, though. He also encourages you to look into getting a Pell grant. And he brags about his online schooling. The bottom of these ads say that his testimonial does not represent an actual person, but his face and hair must come from a real person, right? He doesn’t look collaged together like the overbite guy.

This was a real still of somebody, maybe a mugshot or something. Because I doubt he’s a model. And now he’s supposed to represent a relatable everyman who should inspire us to follow in his footsteps.

Here’s what we know about him:

He doesn’t have a college degree. He used to have a bad job (defined as less than $45,000 a year). He holds an online degree in government financial aid. He drives less than 2 hours a day.

We also know some personal details. He’s 25 years old (born 4-5-84), a resident of California, six foot one, 180 pounds, and his name is Harold something (Snow, maybe?). He has a Class C license meaning he can drive a motorized scooter or a 3-axle vehicle weighing 6,000 pounds or less. He can also tow a 5th-wheel travel trailer exceeding 10,000 pounds but not exceeding 15,000 pounds, although this is not something necessary for the financial aid job, most likely.

Most of that stuff we know from the latest incarnation of the ad, which shows us his California driver’s license: 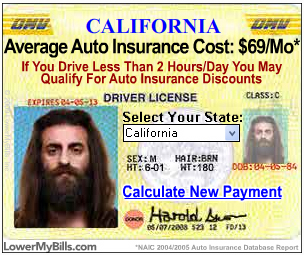 Finally – and this part is more an assumption than something I got from the text on the ads – he gets strip searched at airports alot, and questioned in connection with local kidnappings.

My friends, I’m afraid I haven’t come to you with answers, only questions and creepy photos. But I’ve been seeing these things for months now, and I couldn’t remain silent any longer. I need help solving this one. Where did these photos come from? What the hell are they trying to do by putting them on these ads? What do they mean? Why do they mean? Somebody answer me that. I need to know.

This entry was posted on Saturday, January 2nd, 2010 at 2:09 am and is filed under Vern Tells It Like It Is. You can follow any responses to this entry through the RSS 2.0 feed. You can leave a response, or trackback from your own site.

53 Responses to “The Mystery of Bearded Harold”