Well, it’s October again so it’s time to start up my annual tradition of Slasher Search, where I spend the month trying to find a good ’70s or ’80s slasher movie that I never saw before. Every year it gets harder because the pool keeps getting smaller and sadder. It’ll be almost impossible to match last year’s winner, the legitimately great Canadian hospital-set slasher VISITING HOURS, but hopefully I’ll at least get some laughs.

I take recommendations and everything but my favorite part is digging up these random ones that are so obscure I can only find them on VHS. I mean I haven’t had much success with this method, but I enjoy the hunt, you know? The idea that eventually I could find the holy grail, the lost ark, the crystal skull or the tasty monkey brains. Or at least the stone or the jewel of the Nile or something.

This one is not a treasure but it’s at least watchable, so I consider it a victory. A group of upper class New Yorkers go stay at a cabin upstate where their friend has a boat being built. You know, one of those boat-being-built outings we all enjoy. William Sanderson (from Newhart and BLADE RUNNER) plays Otis, a creepy redneck that’s working on the boat and who keeps spying on everybody with binoculars. We see him apparently stalking the main lady in a dreamy opening flashforward, and we hear a story about him catching his wife with another man. Supposedly he murdered the man and branded his wife with a letter ‘H.’ That would be fucked up if he was marking her as his property with his last initial or something, but it’s even worse: it’s supposed to mean “whore.” (They fuck up the punchline by explaining it in case the audience doesn’t know how to spell either).

There’s alot of shit going on, mostly involving various characters getting naked and making out on picnic blankets. It seems like the movie’s almost over by the time somebody puts on a Halloween mask and starts murdering everybody. The mask kind of looks like a drug store Michael Meyers knockoff but depicting an exposed skull on one side. But according to IMDb trivia it was filmed in ’76, so it had to have been a coincidence.

Or shit, maybe not! Both movies have the same cinematographer, Dean Cundey. Conspiracy! Well, he did a better job on HALLOWEEN.

If there’s a most interesting character it must be the gay guy. He’s kind of a Rupert Everett type, a really sarcastic and arrogant dude that brags about how much sex he gets and acts above everyone and everything. In one scene he goes into a redneck bar and orders some kind of fancy martini, as if unaware that this is not the type of place to do that. It’s like that little joke I love in ART SCHOOL CONFIDENTIAL where a girl insists on walking around barefoot even though the school is in the middle of a city and she steps right onto some broken glass. This is how I want to live my life and I don’t care what you think.

It’s not the worst gay stereotype to promote, but it was not endearing me to this character. Then two dudes at the bar start giving him shit about being gay (even though one of them’s wearing a sailor hat!). He beats the shit out of them and declares “I wasn’t brought up in the South Bronx for nothin!” A gay guy who can handle himself in a fight is not a movie character you see alot, especially in a low rent slasher like this. I give it points for that.

Toward the climax of the movie there’s a long sequence where one of the girls puts on a record and starts doing sort of a seductive burlesque performance for him, stripping down to garters and high heels, doing a sexy fan dance on the stairs, leading him around the house, then she puts makeup on him. It’s actually kind of interesting because it’s not explained exactly what they’re thinking. Is she seriously trying to seduce him? Is she thinking it would be the ultimate notch on her belt to bag a gay dude? Or is she just joking around with him, because she figures he’ll appreciate that kind of girly glamour stuff?

And what about him? He stands and watches. He smiles. He’s obviously intrigued. But is he seriously considering hitting that? Or is he just fascinated to see how far she’s gonna go? She goes into the other room and he looks at himself in the mirror. Is he just checking out the makeup? Is he thinking “Am I gonna hit that? Who am I?” Does he want to do it out of curiosity but have to psyche himself up?

We never find out because there’s a masked killer in the house. To the movie’s credit they don’t have her think the masked man is him and say “Oh come on, quit joking around, take that off!” And it’s the only slasher movie I can think of where somebody gets killed by a large pin.

There’s actually a way weirder seduction scene though. The main lady is very confused. She’s still haunted by her first husband, who got messed up in the head after the politician he worked with committed suicide. She’s got a new husband with her here. But she clearly wants to fuck Otis’s boss, the dude with the Hulk Hogan mustache. When she goes to talk to him she starts absent-mindedly caressing construction equipment like it’s a giant cock. Later she visits him in a barn and starts gently running her hand across a god damn cow! He’s going to get her some eggs and she gets down on her knees and starts fondling the cow’s udder. I’m not exaggerating to make this sound weirder. He comes over and helps her suggestively milk the cow into his hand, tries to get her to drink it. She doesn’t so he sips it himself. But in case you’re thinking he doesn’t get the double-meaning here he wipes the remaining milk across her thighs.

Yeah, basically they jerk off a cow together. 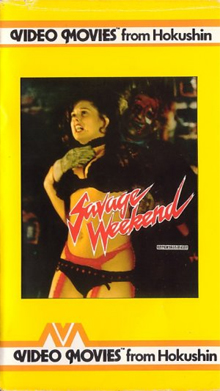 So there’s plenty of interest here, it’s just too bad it’s not creepy at all. The transfer on the pan and scan VHS isn’t helping either – it was obviously supposed to be cropped, so there are tons of scenes with visible boom mics. The ending is kinda good too, there’s sort of a clever way that it all comes together with the killer and a couple of the red herrings getting into a big fight. And for once there’s a class reversal in a slasher film, it’s not the uneducated redneck behind the mask. Also “Yancy Victoria Butler,” aka WITCHBLADE herself, appears as the mustache guy’s daughter, credited as “Little Girl.” So that would be the movie’s place in history I guess, that or it being Dean Cundey’s rehearsal for HALLOWEEN. But yeah, the cow handjob would have to be the most notable part in my opinion.

One of the actors, Christopher Allport (the gay guy?) was killed in an avalanche in 2008. Another one, David Gale, had his life made into a movie starring Kevin Spacey. Nah, just fuckin with you, that was most likely some other guy with the same name. This David Gale played the bad guy in REANIMATOR, though.

Director David Paulsen debuted with this, followed it the next year with SCHIZOID starring Klaus Kinski, and then just did episodes of Knot’s Landing, Dallas and Dynasty, where his fascination with empty marriages, forbidden attraction and risky seduction was more at home.

David Paulsen Dean Cundey Slasher Search slashers Yancy Butler
This entry was posted on Saturday, October 1st, 2011 at 10:44 pm and is filed under Horror, Reviews. You can follow any responses to this entry through the RSS 2.0 feed. You can skip to the end and leave a response. Pinging is currently not allowed.