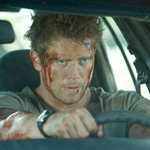 You guys know I’ve always rooted for the movies carrying the prestigious WWE Films banner. I gave the rare rave review of their dumb slasher movie SEE NO EVIL (9% on Rotten Tomatoes), even got quoted by the producer on a commentary track. I wrote that the Triple-H/Parker Posey team in INSIDE OUT might be “this generation’s William Powell and Myrna Loy”. I loved THE MARINE 2 and labelled it one of the few DTV sequels superior to a theatrical original. They were starting to have a really good track record there.

Now I’m a little concerned because it seems like WWE Films is trying to get out of the making-WWE-films business. First they started picking up non-wrestling, independent features to distribute (THE DAY), then they put out two wide theatrical releases, DEAD MAN DOWN and THE CALL, that star Oscar nominees/winners instead of wrestlers. I mean I want to see both movies – they’re from pretty interesting directors, the first looks good and the other looks funny-bad – but I don’t like it. Yeah, so what if Cartoon Network has live action shows and MTV doesn’t play M anymore? Other people will make movies starring Halle Berry, I promise you. WWE should only have her in a buddy cop movie with The Undertaker.

But at least they’re keeping the THE MARINE franchise alive. It’s an anthology series, no connecting characters or events, different directors. Each tells a story of an off-duty United States Marine having to rescue a loved one from hostage takers. The first marine was John Cena, the DTV sequels are lesser known wrestlers Ted DiBiase Jr. and now Mike “The Miz” Mizanin, who doesn’t look as cartoonish as most wrestlers because he was a guy that was on The Real World and said he wanted to be a wrestler, then was on a WWE reality competition and got to do it for real. He ended up with this role because the first guy they cast, Randy Orton, was dishonorably discharged from the real Marines and they complained about him representing them in this important film. That might be why the movie opens with a little asskissing Marines recruiting video type montage as The Miz narrates about getting out of fictional small town Bridgeton, WA to embark on exciting military adventures. 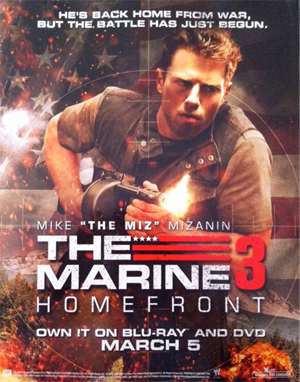 His character Jake Carter is returning home for the first time in 14 months, I think he said. His best friend (Jared Keeso) is the police chief now, his sisters live in a house together, the youngest one he’s worried about because she doesn’t have a job and he disapproves of her boyfriend. Happy-to-see-their-brother quickly becomes annoyed-with-his-meddling, and Chief Best Buddy isn’t so happy when Jake gets in a bar fight that should’ve put him in jail. Pretty soon he’s gonna be wishing he’d get deployed again.

Oh wait, but this is a MARINE movie. So meanwhile about a 40 minute drive away in Seattle, a gang of masked thieves led by Pope (the great Neil McDonough) are robbing a bank. And then Pope guilts the bank manager about foreclosing on houses and burns all the money right in front of him. He’s burning it in a make-a-statement-about-greed way, I think, not in a Heath-Ledge-Joker-fementing-chaos type of way. It turns out these guys are real terrorists, or “not your usual extremist” as one FBI agent says of Pope, but I guess technically they could still be considered bank robbers. They do steal the money by forcibly removing it from its vault. What they choose to do with it after it’s in their possession is irrelevant. I don’t think it’s like shoplifting rules where if you didn’t carry it out of the building it doesn’t count. If it is they could always throw the you-broke-it-you-bought-it doctrine at ’em.

Anyway, they hide out in the ruins of an old ferry (I’m sure inspired by The Kalakala) where they are preparing for a bomb attack somewhere in Seattle, but a squabble leads to a shooting leads to them kidnapping Jake’s little sister and her boyfriend because they saw the whole thing while hanging out in a nearby junkyard. So Jake and the FBI try to get them back.

Darren Shahlavi (IP MAN 2) plays a member of the gang, so he gets to do one of his traditional henchman-who-clearly-has-more-fighting-skills-than-the-others-although-he-doesn’t-really-get-a-good-enough-showcase-for-them roles. At least his character stood out a little in THE PACKAGE.

Pope’s weaselly henchman is played by Michael Eklund, who I recognized from Seagal’s True Justice show and from Stone Cold’s movies HUNT TO KILL and TACTICAL FORCE. I guess there’s alot of low budget action work to be had if you hang around Vancouver. Yeah, it’s filmed in Canada, but admittedly it does look like parts of Washington. Besides the ferry another accurate local touch is that his sister complains about property taxes. On the other hand somebody pronounces pecan pie “pee-can” instead of “pih-con.” They do pass the test of pronouncing the city of Spokane correctly (it’s spoe-can, not spoe-cane).

I notice they mention a cedar mill. Wood mills were a big part of fake rural Washington in the The Rock version of WALKING TALL, which also had the WWE name on it, and also had Neil McDonough as the bad guy. Weird.

It’s interesting that this bad guy really does care, it’s not just a front for stealing money like in a DIE HARD movie. In the book Nothing Lasts Forever the villains were true believers. DIE HARD changed that and terrorists-who-are-actually-thieves became the standard used in DIE HARD 3-5, UNDER SIEGE 1-2, etc. AIR FORCE ONE and THE MARINE 2 and 3 are different, their villains really are trying to make a statement about a cause they believe in.

I started to wonder if this one is telling us that good guys are soldiers who don’t question orders and bad guys point out greed and corruption. But that doesn’t really fit,because he doesn’t like the FBI’s plan to raid the ferry with his sister on it, he tries to fight them and later sneaks off to infiltrate-and-extract in his own way. I think they’re just trying to make it contemporary by mentioning a bunch of issues you hear about alot these days. Instead of any kind of “just how evil is he?” scene we get the FBI describing his doctorate in philosophy, his parents having their home foreclosed, his sister being dropped from her insurance when she had ovarian cancer. Hopefully we can all sympathize with this, although not with his teaming up with a militia and planning a bombing “to make them listen.”

Jake Carter doesn’t get a “just how badass is he?” though. They figure it’s enough to know he’s a Marine. The Marine, I mean.

I like that he gains respect for his sister’s boyfriend when he tells him to run to safety and he stays to try to help save the sister. I guess it’s that cliche of marines believing in “never leave a man behind.” Another example of the kinda macho bonding that I love is where the chief arrests him and seems to be against him, but then secretly lets him loose. “You’ll get alot of heat for this.” “Yeah.”

Part 2 came from a fairly accomplished DTV director, this one is by Scott Wiper who did the terrible post-action WWE Films debut THE CONDEMNED. This is a big improvement, at least. He co-wrote it with Declan O’Brien, director of WRONG TURN 3-5 as well as SHARKTOPUS. Together this superteam came up with a reasonably entertaining movie, but it’s strangely small time. Pope’s plan seems elaborate as it’s unfolding, but it turns out just to be about setting off one car bomb. We don’t even ever find out where the building was that he was gonna try to blow up. The climax is just The Marine driving the car really fast, rolling it and climbing out before it blows up. It’s a job that requires some mettle but not necessarily marine training. Before the car driving though there is a good job for The Marine, a shot that’s too risky for the cop to take but he knows he can take it because he’s The Marine.

Miz is passable but unremarkable and honestly doesn’t do that much action-wise. He gets involved in the battle surprisingly late in the game. He does have that one bar fight I guess, and he impales a guy in one part. And does some intense faces while steering. And he drives a motorcycle. At the end he’s covered in more dirt and blood than John McClane at the end of DIE HARD, although he didn’t go through as much.

I’m happy to say this is watchable, sorry to say that I’ve already mostly forgotten it. Looking forward to part 4 though. 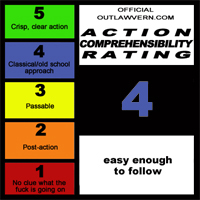 Darren Shahlavi Declan O'Brien DTV DTV sequels Michael Eklund Neal McDonough Scott Wiper WWE Films
This entry was posted on Monday, April 29th, 2013 at 1:34 am and is filed under Action, Reviews. You can follow any responses to this entry through the RSS 2.0 feed. You can skip to the end and leave a response. Pinging is currently not allowed.

25 Responses to “The Marine 3: Homefront”