Space is the Place 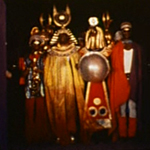 “Equation-wise the first thing to do is to consider time as officially ended. We work on the other side of time. We’ll bring them here through either isotope teleportation, trans-molecularization, or better still, teleport the whole planet here through music.”

There’s no way around it: SPACE IS THE PLACE (1974) is a crazy fuckin movie. And not in the common manner of movies that are obviously trying to be weird to get a rise out of you. More like you watch it and wonder who the hell made this movie. Actual crazy people? A UFO cult of some kind? Inmates at an asylum that uses free jazz and guerrilla filmmaking as therapy? The people in question, crazy or not, are Sun Ra and His Intergalactic Solar Arkestra, the one-of-a-kind cosmically themed avant-garde jazz army from Philadelphia by way of New York by way of Chicago by way of Saturn. They land their space ship in Oakland, California, hang out a while, perform, and try to find ideal new recruits for their all black space colony.

Sun Ra wasn’t always a space man. Early in the movie we see him as Sonny Ray, the piano player at a black Chicago night club circa 1943. The real life Sonny Blount indeed played clubs like this. He was a talented pianist backing up touring musicians and leading his own highly skilled bands, renowned for being able to play in many styles.

His first recording as a pianist was pretty normal blues stuff:

So he could really play, he wasn’t just fucking around. He paid his dues. But there was always something different about him. He was jailed for refusing the draft during WWII, and there psychiatrists described him as “a well-educated colored intellectual.” He read about Egyptology, Afrocentrism, the Bible. In the ’50s he and his band started wearing crazy costumes inspired by sci-fi and Ancient Egypt. In the ’60s he got into free jazz and developed his unique brew of atonal keyboard sounds, cosmic chants and layered noise. During his career he released over 100 albums, many of them barely heard because they were released in editions of 75 through his El Saturn record label. (Otherwise they would’ve been smash hits, right?)

When he felt like it he could sound normal. I have a CD of an album he did as “The Sensational Guitars of Dan and Dale” that was made to cash in on the popularity of the Batman TV show. It starts off with a straight cover of the theme song and continues in that vein for other bluesy surfy numbers. But alot of his stuff, including most of what’s in this movie, many normal people would not consider to sound like “music” per se. It’s not that much of a stretch to believe that his epic walls of layered noise were a sincere attempt to contact other planets.

By the time he made this movie he sometimes liked to play like this: 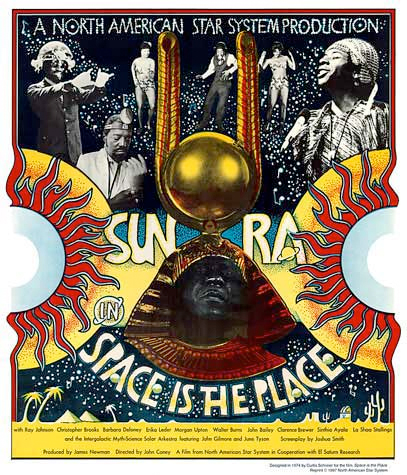 Kinda hard to boogie woogie to that one. In the movie his music is portrayed as a weapon in an ongoing battle. When the luciferian Overseer (Ray Johnson, THE HUMAN TORNADO) shows up at the club, Sonny Ray unleashes a piano solo so noisy that glasses explode, the stage smokes and the crowd trample over each other to flee. Reminds me of a story I heard about a band playing so loud it made people puke.

In the next scene it’s present day (1974) and Sun Ra has been gone for five years, having left in a spaceship shaped like two eyeballs to form a black separatist space colony, like Superman did between part 2 and part RETURNS. We saw his new planet in the opening scene, where he gave a weird monologue from a cheap ass Wonderland meets FANTASTIC PLANET type place with plants shaped like yellow hands and tongues sticking out of horns and a wiggly psychedelic tentacle thing floating around in a bubble.

Now the media gathers in Oakland for Ra’s prophesied return to deliver his “so-called plan for the salvation of the black race.” But to be honest it’s kind of a small gathering considering how monumental something like that is. Especially light on white reporters. Not that impressed, I guess. But at least there are a few people there to welcome and interview Ra when he returns.

“Son of a bitch, ain’t that just like him. Two minutes late!” says the Overseer.

The rest of the movie keeps cutting between Ra and the Overseer’s SEVENTH SEAL style cosmic tarot card game on a table in the middle of a desert, footage of the Arkestra performing, and a sort of blaxploitation movie about Ra coming to the hood to choose worthy people to come into space with him. In a way he’s like Blacula, an otherwordly figure walking around talking to street dudes with cool ’70s fashion and trying to inspire them to do better with their lives.

The blaxploitation stuff is the best, obviously. My favorite scene has him visiting a youth center with pictures of Huey Newton, Malcolm X and Martin Luther King on the wall. He shares his Afrocentric space consciousness with teenagers who I’m pretty sure are reacting for real. Imagine if you came to the center after school one day and got to enjoy a presentation from these guys: 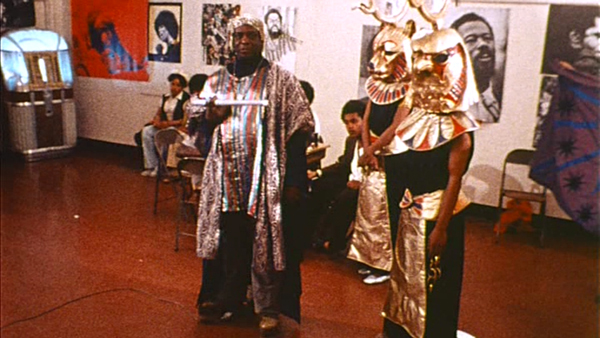 I don’t know what they told these kids, but they just roll with it. There’s a priceless reaction from one young lady who seems very surprised to actually agree with some of Ra’s points. Another great I-think-candid reaction is when they’re driving around in a crazy car chariot and two fashionable women on the sidewalk see them pass. Even better than their reaction to that shit rolling by is the look of satisfaction on Sun Ra’s face. 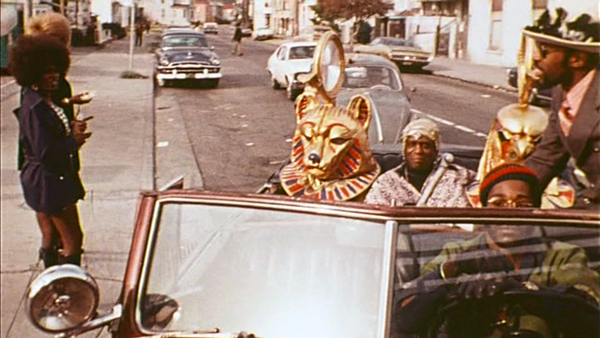 I think he was serious about alot of that stuff he was preaching, philosophically if not literally. But this look right here proves that he knew some of what he was doing was hilarious.

Everybody knows about Sun Ra coming down from space, but it’s not that big of a deal. He doesn’t have to hide out like E.T. or Starman. In fact in a section inspired by the song “Outer Spaceways Incorporated” he opens an “Outer Space Employment Agency” and meets with clients. Mostly he just walks around the neighborhood meeting a few people. Most of them sort of become his loyal followers, but one hater type guy is real skeptical about the whole thing and always trying to call him a sell out and stuff. The Overseer is always trying to make him look bad, and some people don’t like that he accepts a deal for distributing his records and being played on the radio.

Of course this is all leading up to a concert. The venue is not that big, but in those days the Arkestra still played shows at high schools and stuff, so it’s not slumming for them. It’s gonna be Sun Ra’s ultimate victory, so the Overseer and some white feds are trying to stop it from happening. The most unique twist on a blaxploitation villain is the two white NASA scientists trying to find out how he powers his space ship (he already answered that right when he landed – it’s powered by music). These guys use the n-word, tell racist jokes and beat up the ladies at the brothel. I’m pretty sure this is the only movie in cinematic history to portray NASA employees that way. They’re actual rocket scientists but also dumb yahoos.

The FBI agents are the most insidiously racist though. They abduct Ra in the back of a van before the concert and keep him somewhere tied to a chair. Their way of using the power of music to get to him is to leave him with headphones on playing a cassette tape of “Dixie.” Of course he knows that’s a song invented for blackface minstrel shows about a slave who dreams of being back in “the land of cotton.” So it’s a major fuck-you. 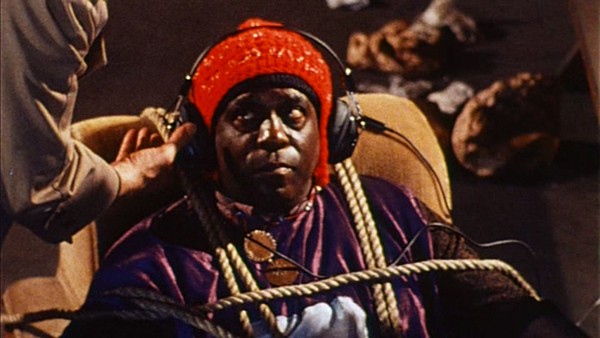 But remember, Sun Ra is always late. The crowd sticks around for him to show up. One funny part is the comedian who nervously tries to stall on stage until he shows up. I wonder if a comedian is a good opening act for the Arkestra? It seems like an odd fit, but maybe you need something to lighten the mood before they put you into a trance. 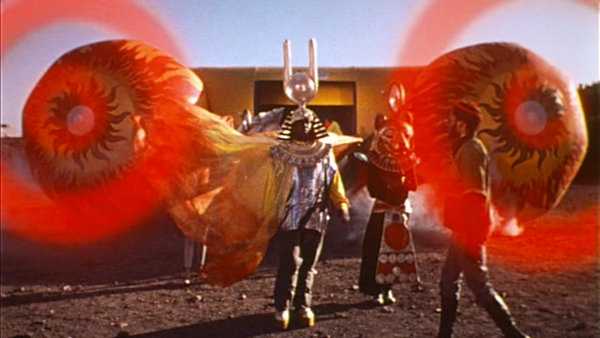 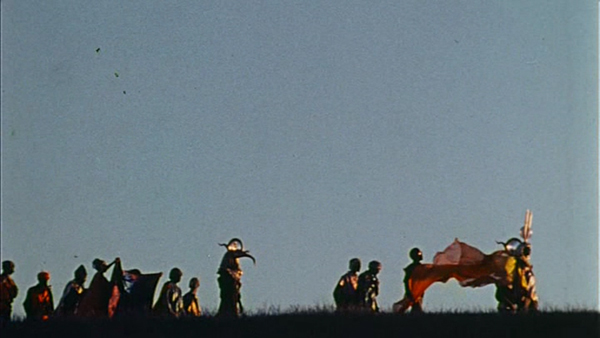 Nobody involved in this one went on to very big movies. Cinematographer Seth Hill became a writer/director/producer on In Search Of. Editor Barbara Progress had done TNT JACKSON and later did FADE TO BLACK and CHUD II. Co-writer Joshua Smith went on to write SUPER SEAL two years later, and the rest is history.

Director John Coney has no other credits on IMDb, but he definitely worked as a producer on many of those KQED shows. Topics I’ve been able to find include The Living Theater and African and Haitian dance. A few years before this he directed a well-regarded short called Music With Balls that somehow was a collaboration with minimalist composer Terry Riley and sculptor Arlo Acton. His producer on that, Jim Newman, saw the Arkestra perform at a planetarium and approached them about doing a half hour performance film for the station. Instead Sun Ra wanted to do this.

There are a number of musical acts that managed to put together narrative movie vehicles: The Beatles, The Monkees, Menudo, Run DMC, The Fat Boys, 50 Cent. I love that somebody as out there as Sun Ra managed to get his name on that list too. Actually it made me realize that it’s kind of a shame that the Sun Ra influenced space cadets of Parliament-Funkadelic never managed to get one. I believe in the ’70s they shot a little bit of footage and had planned to do a movie, but if I remember right it was in conjunction with their album The Motorbooty Affair. Atlantis is probly a difficult location for an indie movie. Too wet. Later in the ’90s the Hudlin Brothers tried to do a Mothership Connection movie, but maybe it’s best it never happened in that era. I wonder what it would’ve been like though? Kinda like this but with more dancing?

I got a soft spot for weirdo geniuses, and Sun Ra was definitely one of those. He defied categorization in so many ways, not the least of them being in failing to fit into standard ideas of blackness. We all respect iconic black actors of the era like Jim Brown and Fred Williamson or Sidney Poitier. And then here’s this guy wearing robes and crowns and shit and making crazy sounds and talking about Africa and “The Alter-Destiny” and stuff. What’s cool about him is not about masculinity. These days there’s not enough glorification of artistic and intellectual black men. Or black men from space.

Is Chadwick Boseman ready for a Sun Ra biopic? I think it’s time. Maybe start filming during an eclipse or something.

blaxploitation jazz Sun Ra
This entry was posted on Monday, March 2nd, 2015 at 12:34 pm and is filed under Reviews, Science Fiction and Space Shit. You can follow any responses to this entry through the RSS 2.0 feed. You can skip to the end and leave a response. Pinging is currently not allowed.

8 Responses to “Space is the Place”