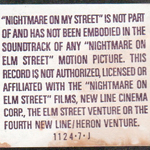 Last Halloween I did an important, should’ve-been-award-winning piece called Analysis: “A Nightmare On My Street” vs. “Are You Ready For Freddy?”, in which I compared and contrasted the Freddy Krueger themed song by DJ Jazzy Jeff and the Fresh Prince with the one by The Fat Boys. Today I have a brief update, or sequel if you will, to that piece.

In the piece I embedded the “Are You Ready For Freddy?” video, but said there was no video for “A Nightmare On My Street.” In the comments it came up that people including Jake thought they remembered seeing a video. I feel like I would remember such a video existing, but more importantly it’s not on Youtube, on any of the many extras-packed DVDs and Blu-Rays of the Elm Street series, in the excellent 4-hour documentary NEVER SLEEP AGAIN, or on the DJ Jazzy Jeff and the Fresh Prince video collection.

Since then I’ve encountered other people who think they remember seeing it, so I looked into it again. Wikipedia says

“The song was considered for inclusion in the movie A Nightmare on Elm Street 4: The Dream Master, but the producers of the film decided against its inclusion. New Line Cinema, copyright holders of the A Nightmare on Elm Street film franchise, sued DJ Jazzy Jeff & The Fresh Prince’s record label for copyright infringement, forcing the label to destroy a music video produced for the song. Both sides eventually settled out of court.”

but since this section is not sourced I wondered if some of it could be an urban legend. The very specific language of the disclaimer sticker on the record supports the existence of a lawsuit or threat of one, but would they really have made a video before that happened?

Talking about it with an unnamed person I joked that I should ask Jaden Smith on Twitter, see if I could get a weirdly capitalized answer from him. She said why not ask DJ Jazzy Jeff? Which of course was the right thing to do.

Today I have what I believe is confirmation of Wikipedia’s claim that there was an unreleased video: 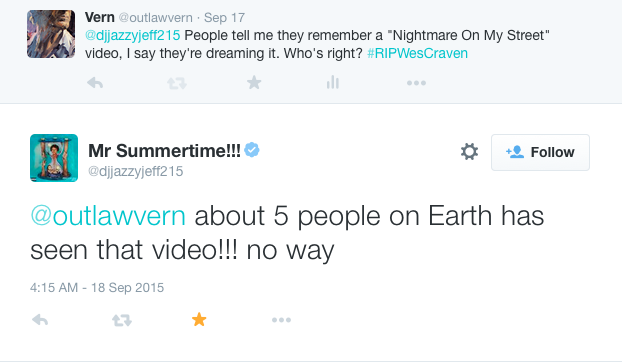 So why do so many people think they remember seeing a video that was never released? It’s possible that people are mixing their recollections of the Fat Boys video with the more memorable song that they listened to more often. Or – and this is the theory I’m leaning toward – the song is just so vivid that it conjures up imagery in your mind that you might later remember as a video.

Or it could be yet another phenomenon caused by Freddy magic. Dream demons or dream masters or some shit like that. Who knows.

On a personal note, I would like to say that I saw DJ Jazzy Jeff and the Fresh Prince open for Run-DMC at the Paramount Theater in 1988 and to this day I think “The Magnificent” is one of the best DJs ever. I’m glad he’s out there still doing his thing under the radar instead of playing Will Smith’s intern in the BAD BOYS movies or something.

I’m still an awe of his “Transformer Scratch”:

And I’m glad whenever I see him pop up somewhere, like on this VH1 Hip Hop Honors tribute to LL Cool J with The Roots and Eminem:

DJ Jazzy Jeff Freddy Krueger hip hop
This entry was posted on Friday, September 18th, 2015 at 11:42 am and is filed under Blog Post (short for weblog). You can follow any responses to this entry through the RSS 2.0 feed. You can skip to the end and leave a response. Pinging is currently not allowed.