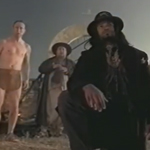 Okay, first thing’s first: although this western starring Mario Van Peebles is sometimes subtitled “POSSE II” or “POSSE RIDES AGAIN,” it is not a straight sequel to POSSE. If it was really intended as a sequel it was in the weird way of “what if we did another western starring Mario Van Peebles?” His character is named Chance this time (it is not specified whether or not his mama took one) and although at first he’s kind of a mystery man, people start referring to him as a “half breed” (explaining his long, straight hair) which I don’t believe he was in POSSE. At the end there’s a part where he puts a stick of dynamite in his mouth like a cigar, which could possibly be a reference to something he does in POSSE. But otherwise it really doesn’t seem like it’s supposed to be the same guy as Jessie Lee.

Anyway, Chance makes a great entrance. He’s coming over the horizon, something looks weird about him, he’s got a strange silhouette. As he gets closer you realize it’s ’cause he’s been tarred and feathered and run off into the desert in handcuffs. Ah shit, this guy is not having a good day.

He comes across a caravan of a couple nuns, some mental patients they’re taking care of and a couple guys on security. The mean Mother Superior (Jean Speegle Howard) has them clean him off but figures he’s a convict and treats him as their prisoner. So she’s not Mother Teresa. 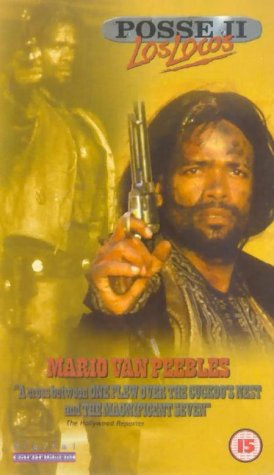 But at least he got rid of the feathers, so he goes along with them, he doesn’t have a bad attitude about it. The mentally ill people in this group are of the lovable eccentric variety you get in movies. So there’s one guy that thinks he’s Icarus, a guy who’s obsessed with bunnies, a guy who sucks on a rope all the time, a lady who never talks (Melora Walters, ERASER).

One day Chance notices the guard guys peeping on the ladies bathing in the river. He makes a sexual harassment related bet with them that goes poorly, but he doesn’t rat them out for being involved so they respect him enough to let him into their card game that they like to have each night.

The thing is, Chance has figured out that one of the crazies, Presidente (Rene Auberjonois) is some kind of autistic genius card counter, so he plays as a team and it works out well. This turns out to be a test run for him to sneak off into town and take on this loud mouthed gambler Deacon (Reno Wilson, voice of the little Jar Jar robot in TRANSFORMERS) who apparently took his money and his girl. This is one of the best scenes as he tries to orchestrate Presidente winning for him while sitting casually. When Reno doesn’t take kindly to losing all his money and tries to weasel out of the bet, Chance beats him in a quick draw duel while sitting down and eating chicken.

Up until this point Chance has been a mess, wearing a bloody bandage that looks like a KARATE KID headband, but now he leaves with some money and some cooler clothes, including a head bandana. (I wonder if he keeps finding more feathers and tar chunks in different places, though? This is never mentioned but how could he not?)

Anyway he started dressing cool just in time for a big shift in the story when some bandits attack, killing the nuns, their guards and some of the mental patients. They’re looking for the mute girl, who turns out not to be mute, and has a history of arson and genital mutilation. Specifically she chopped off the dick or balls (not sure) of the notorious Mexican bandit Batista (Danny Trejo) after he roughed her up. (He terrorized her with, yes, a machete.) So Chance has to kill these gunmen to protect her (well, mostly himself).

Chance tries to take this, uh, opportunity to go solo. He addresses the “crazy people,” wishing them well as they take the wagons, money and guns to the nearby mission while he goes in the opposite direction and never sees them again and lives a good life not taking care of them. They all think he’s awesome and that they’re going with him, so it takes some doing. He only feels guilty enough to come back after he hears a gun shot and finds out that they’re just shooting each other without understanding what they’re doing. (This is why we need background checks, people.)

So it becomes a movie about a loner badass having to babysit a bunch of lovable mentally ill people and transport them across a desert to safety. They’re dangerous in the sense that that one guy shot that other guy, but otherwise they’re harmless. The worst thing they do is when Presidente sells their horses for $2, interrupting Chance getting laid in a bath tub.

Of course they gotta come into one of those tiny western towns to have a showdown with Batista (the character, not the wrestler) and his men. That also means he has to make them into an army. He reluctantly gives them weapons and says “This time we’re gonna be very, very, very careful we point the guns at them. We do not point the guns at us. All right?”

I think overall the story flows a little better than POSSE, but it’s much lower on badassery, smaller in scope and without the nice message at the end. Also it doesn’t have any cool Golden Age rappers in it, so I think it’s a lesser movie, but I’m sure there are people out there who do not consider Big Daddy Kane an important cultural figure who would disagree.

Van Peebles wrote the screenplay again, but did not direct this time. That fell to the French-Canadian director Jean-Marc Vallée, in his American debut. Since then he hasn’t really done much unless you count DALLAS BUYERS CLUB and WILD and a couple other highly acclaimed and award winning movies.

Danny Trejo Jean-Marc Vallee Mario Van Peebles Melora Walters Rene Auberjonois Reno Wilson
This entry was posted on Monday, September 21st, 2015 at 10:27 am and is filed under Reviews, Western. You can follow any responses to this entry through the RSS 2.0 feed. You can skip to the end and leave a response. Pinging is currently not allowed.