Love On the Run 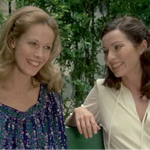 LOVE ON THE RUN is a part 5 where everything comes together: Antoine’s early estrangement from his parents, the patterns of his failed relationships, the risks of putting his personal life (and therefore the people he knows’ personal lives) in his so-called fiction. In the opening we see him with a new girlfriend, Sabine (children’s singer and cartoon show host Dorothée), who he seems to be screwing it up with already. He obviously hurts her by cancelling their plans, without explaining why, but it’s to finalize his divorce with Christine (parts 3-4). So we get to see her again, and then OH SHIT, part 2 co-star Collette (Marie-France Pisier, also one of the screenwriters) happens to see him, finds out about his book, and reads it. And later he sees her and wants to talk to her again.

I’m not saying it’s FAST FIVE good, but it has a similar quality of uniting characters and threads from across the series and putting them into a story that’s in some ways more exciting and satisfying than previous entries. It also made me think of the fourth PHANTASM because of its liberal use of footage from when the actors were younger, though in PHANTASM it’s unused footage and here it’s almost like a clip show episode of a TV show. They keep bringing up things that happened in the past and then there’ll be a short clip from the movie where it happened. (Since this was pre-home video it was reasonable to expect that even if viewers had seen all the other ones it had been only once a long time ago.)

It’s also a little like ONCE UPON A TIME IN MEXICO because in the midst of these flashbacks there are also flashbacks to things that happened between the last movie and this one, as if it’s clips from another sequel we never saw where they moved in with Christine’s lesbian friend. And of course bringing Collette and Christine together for a scene at the end is kinda like when Michael Dudikoff and David Bradley met up in AMERICAN NINJA 4.
Sabine is another pretty blond. But this is 1979 so she’s introduced wearing a Snoopy night shirt. 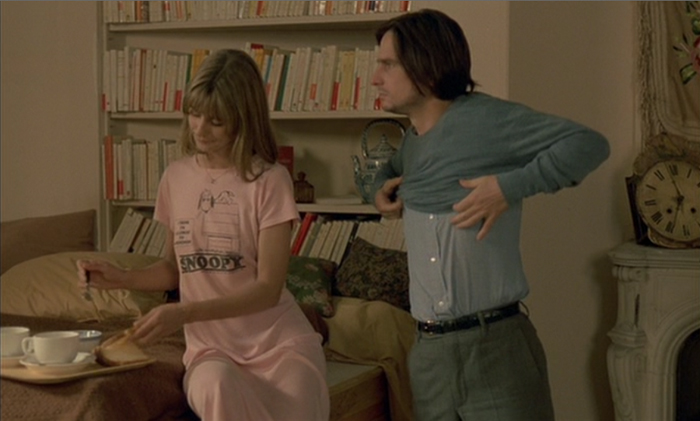 She works at a record store, where she met and sometimes hides from Antoine. She wants him to move in with her, or at least leave a razor there, but he would rather go way out of his way to leave her house in the morning, go back to his house and get ready for work. Collette is a lawyer who knows Christine’s divorce lawyer, and sees them at the courthouse after they sign the papers. She’s also leaving on a train that’s right next to the one Antoine has to put Alphonse (Julien Dubois) on to send him to camp. And she’s seeing a guy who owns a bookstore, who sometimes hides from her, and who we discover knows Sabine enough to get phone calls from her. So there’s alot of coincidence involved.

When Antoine sees Colette on the train he follows her on and they have a long talk. She’s just read his book where he tells a very self-serving version of their youthful romance. One part where he’s lying or fooling himself is where he claims that he stopped thinking about her but then “as fate would have it, her parents moved in across the street.” (We know from ANTOINE AND COLETTE that he was so obsessed with her he moved across the street from her to spy on her.) She’s able to quiz him about his version of their days together and tune into how he screws up his relationships. She’s totally right. She teases him about just writing about his life and not being able to do actual fiction, so he pitches her a book he wants to write, and we see it acted out, with him sometimes in the scene as the hero, but narrating to the camera. It’s a story about a guy finding a torn up picture of a woman, putting it back together, deciding he loves her and trying to track her down. Collette is thrilled by the idea until she realizes he has nothing after that. And she scolds him for only loving to meet women and then losing interest. So, so accurate.

It’s a satisfying reunion because Colette gets to voice things about Antoine that we’ve been thinking all along. And once again she’s kind of toying with him, and able to get away with it, without keeping me from siding with her. Antoine deserves any woman trouble he gets. This is a guy who, while finalizing the divorce proceedings, seems to be checking out the judge. When she puts on glasses he flashes back to his ex-wife putting on glasses which he had her do to remind him of Colette. 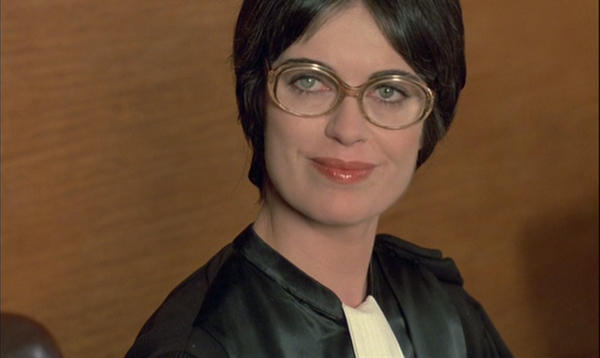 And surprisingly, even though this was made by Antoine’s real world counterpart, it’s a movie that respects his exes. One of the best scenes is when Colette and Christine meet and have a long conversation about him. We learn that Colette’s daughter was run over. An intense flashback shows her with the dead body and running crying to her mother. This explains how she acted around a child in an earlier scene and complicates her decision to take a case defending a child murderer. She’s been through alot. But I was kind of unclear whether she was telling the truth or not when she told him that her law job doesn’t pay her enough so she prostitutes herself on trains to make ends meet. At any rate, I like that she gets this whole backstory. (And it makes sense, because Marie France-Pisier, who plays Colette, co-wrote the movie with Truffaut.)

It’s sweet, if undeserved, that Colette and Christina together conspire to try to help Antoine mend his relationship with Sabine.

This has the most unexpected and random returning character from part 1, THE 400 BLOWS: the guy Antoine saw kissing his mother when he was out skipping school. We learn that he truly loved Antoine’s mother and stayed with her until she died. We also learn that not only did Antoine know she died and not make it to the funeral, he also hasn’t bothered to visit her grave, which is nearby! This poor old man tells him all about how great his mother was and how much she loved him and he hopes to be able to visit Antoine to remind him of her. It doesn’t seem like Antoine hates his parents or anything, he just doesn’t think about them much.

That’s a huge difference between Antoine and the American Ninjas, by the way. To both American Ninjas, the deaths of their parents were a defining event, leading to their worldly lives and training in the ninja arts. For Antoine it was leaving his parents behind that freed him to sort of explore the world, but mostly just his own bellybutton. He barely noticed their deaths, and without ever getting amnesia or anything.

Here’s a Doinel mystery for you: in part 3 I told you about the part where he was randomly following a lady on the street until she went to a cop and then he ran away. Creepy as shit. In this one, when he’s revealing to Sabine the story of how he fell in love with her from a discarded picture and then had to do detective work to track her down and meet her, he mentions that he tailed people on the street in his search, and they show a shot of him following that woman.

How can we interpret this?

1) This is like the SAW movies, sometimes they overlap, and we now know that in between some of the scenes on that one he found this picture and fell in love and was trying to track down its owner and that’s what that scene was, he was totally innocent the whole time and it only seemed like he was a stalker and future rapist and/or murderer because we weren’t given the proper context at the time.

2) He’s a fucking liar and he tells himself and/or Sabine that he did this shit to try to justify being a weirdo who goes around following and scaring women.

3) They needed a shot of him tailing somebody so they re-used that one to save money. But it’s not necessarily supposed to be the same incident.

I honestly don’t know the answer. But death of the author, so I’m gonna go #1. SAW.

In the end he makes the astounding step of making his girlfriend feel wanted and having a romantic moment with her. Can you believe that shit? Antoine Doinel doing that. Unbelievable. Their kissing is intercut with the scene from 400 BLOWS where he went to the carnival and rode on that spinning anti-gravity ride. A feeling of childlike elation. A happy ending.

Truffaut wasn’t happy with it, though. He felt like he hadn’t made Doinel evolve much. Fair enough. But I like that he brought in all these female characters and showed them a little respect. And hey, by the way, if you enjoyed Dorothee as Sabine, I have a present for you. What is it? Oh, nothing big. You know. Just a little video of her singing her award winning theme song to the French version of EWOKS: CARAVAN OF COURAGE:

And I don’t want to overdo it, but I really like you guys, so you should probly also know that she sings the French theme song to The Smurfs. In fact, she had a whole album about Les Schtroumpfs.

I tried to figure out what the deal was with her, but the information is kind of cryptic. Apparently she created a show of cartoon clips, which an IMDb trivia item calls “controversial TV show for children Club Dorothee,” with no explanation. Her bizarre and over-detailed Wikipedia entry, which is awkwardly translated into English and includes 43 exclamation points, had this explanation:

Even if the program was extremely popular, it was also highly criticised by politics, parents, intellectuals and teachers. Actually, most of the Japanese cartoons were said to be too violent by parents. Besides, the games and the sketches were considered as ridiculous and stupid, sometimes racist. And terrible rumours were going round about Dorothée, pretending she hated children, she had played in porn films, she was interested in money… Many times, she responded to critics by doing allusions in the sketches, the songs… and she also accepted to justify herself in some interviews, telling that people mixed up violence and action. For instance, in one of her song, she says she just doesn’t care about what so-called intellectuals can say about her… “I keep happy days in my heart, I forget rainy days”.

I still don’t really get it, but there are episodes of her show on Youtube. Here’s one from 1990, in case you’re curious too:

I guess I’d have to say she’s the Marjoe Gortner of the series.

Truffaut directed three more non-Antoine films before his death in 1984. Had he lived maybe he would’ve brought Antoine back for a weird ’90s comeback movie where he teams with MC Solaar to clean up the neighborhood. Or a 2000s when where he coaches a parkour team. But that’s okay, this seems like a good one to end it on. It isn’t Ewoks-defeating-the-Empire-good, but I think it’s a satisfying finale to the Antoine Doinel Saga. I’m impressed. Good job, Truffaut.

Antoine Doinel Claude Jade Dorothee Francois Truffaut French New Wave Jean-Pierre Leaud Marie-France Pisier
This entry was posted on Wednesday, June 1st, 2016 at 9:12 am and is filed under Drama, Reviews. You can follow any responses to this entry through the RSS 2.0 feed. You can skip to the end and leave a response. Pinging is currently not allowed.

9 Responses to “Love On the Run”