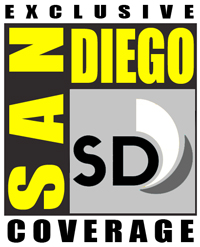 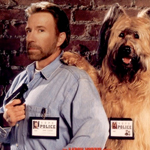 In the K-9 review I mentioned that it competed with TURNER & HOOCH for King of the Human/Dog Buddy Cop Movies. But TURNER & HOOCH takes place in the fictional northern California town of Cypress Beach, so who gives a shit? Nobody.

For the true San Diego/cop/dog experience outside of K-9 you gotta got to 1995’s TOP DOG, where Chuck Norris plays Lieutenant Jake Wilder, a San Diego police detective actually assigned a dog named Reno as his partner. I don’t know if this is K-9 fan fiction and the SDPD is supposed to be building off of the precedent of Jerry Lee, or if K-9 exists as a movie within this universe and it inspired them to do this for PR purposes. But the point is this is in the top two San Diego dog cop comedies of the 20th century. Just my two cents.

The filmatists seem to aim for the same basic approach as K-9 – jokes peppered through a serious action movie. The villains are white supremacists shown making hateful speeches (though thankfully light on racial slurs), they are mostly not played as bumbling buffoons. But there’s cheesy, happy music by George S. Clinton (MORTAL KOMBAT), the jokes are broader than K-9, the action is cornier and the look is shoddy. On the positive side there are more explosions, kicks and jumping stunts. All these things can be explained by who the director is: Chuck’s brother Aaron Norris (DELTA FORCE II).

When the movie begins, Reno is teamed with an old man (Carmine Caridi, GODFATHER II and III) who gets killed by the racists when he stumbles upon the weapons cache they’re planning to use to attack the upcoming Racial Unity Rally (which we later find out coincides with Hitler’s birthday!). Like a human cop, Reno gets shot and thrown in the water but is hard to kill so he washes up alive and ready to go find the fuckers who did this. Or at least be there when Wilder does. 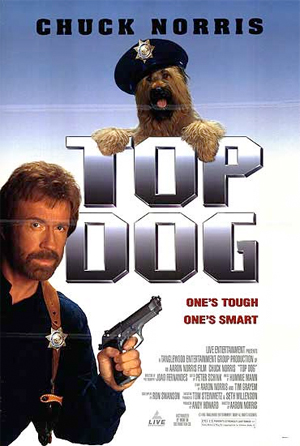 Wilder fits many of the tropes of low rent action heroes, including the one where he’s introduced waking up hungover in the afternoon with empty Bud Light cans and pizza boxes strewn around. The dog is shown to have many parallels to him, including an almost identical record of commendations and suspensions, and also the messiness. You could even argue that he has a beard like Chuck does, but at least Chuck keeps his clean. Reno’s beard is always slimy and gross. This is unprofessional, in my opinion. Benji or Lassie would never have a movie where they look like they need to be groomed.

But you know, Reno is a dog who plays by his own rules. A protective-suit-wearing cop says he’ll never work with him again after a training exercise. “That’s not how he was trained! He cheats!”

Reno even gets his own Just How Badass Is He? when his trainer (Michele Lamar Richards, Alien Nation, COSMIC SLOP) says, “Reno’s an exception. He’s been cross-trained to apply to find almost any known narcotic and explosive there is. He can disarm and take out an assailant quicker than either one of us. Do you think you can handle it?” 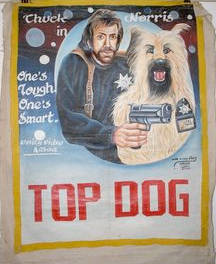 Reno also saves a baby from a fire in the opening scene. The firemen failed, the pooch achieved. And he has flashbacks. Like the dog in THE HILLS HAVE EYES 2.

So they do take this “he’s an action hero, but he’s a dog” thing admirably far, but then they sort of take the wind out of it by also trying to make him cute and having a sub-Jake-Lloyd mop-headed kid (Erik von Detten, the voice of Sid in TOY STORY, Wally in the LEAVE IT TO BEAVER movie) as his best friend or whatever.

This is a movie in a hurry to cut ties with reality. In the opening, an awkwardly voice-overed scene of white supremacists blowing up an apartment building in a black neighborhood dissolves into sprinkles pouring on donuts. The grandpa brings the dog and the grandson to Winchell’s, and the kid begs to feed a jelly donut to the dog. 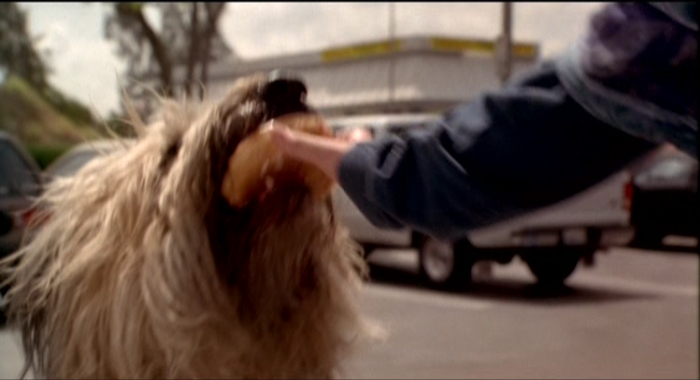 He gives his donut to the dog, is super psyched and then happily gets on his bike and does a huge BMX jump over a wall. What kind of a brain damaged kid goes to the donut shop just to give his donut to a dog? And who thinks that’s a good idea for the opening scene of a movie? “You know what, let’s do the opening credits over a montage of donuts. And then this is all leading up to a kid feeding a donut to a dog, because you know how kids love to not eat donuts but to feed donuts to dogs and then do a BMX trick and disappear.”

Later the kid’s idea of fun is to take Reno to watch a dog show and then have him try on different hats and sunglasses.

The story is credited to Aaron Norris and Tim Grayem (actor, “Bonehead” in HELLBOUND), screenplay by Ron Swanson (writer of OVERKILL starring Aaron Norris, not the beloved character from Parks & Recreation, although that’s who’s pictured on his IMDb page). I’m not gonna point any fingers at which writer I think it is who doesn’t understand how donuts work. There is no need for a witch hunt. Besides, if anyone is to be indicted for the opening of the movie it is the artistic criminal who chose the fucking font. 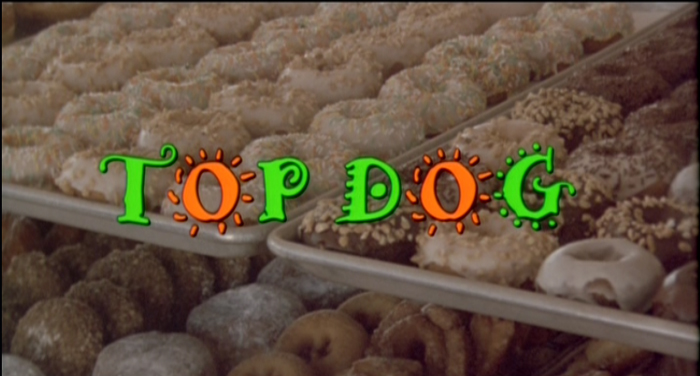 Here’s a weird joke: at the beginning of the movie it’s established that Reno likes to chew on people’s scarves. Then at the very end, this hobby leads to a comedic assault on a religious leader. 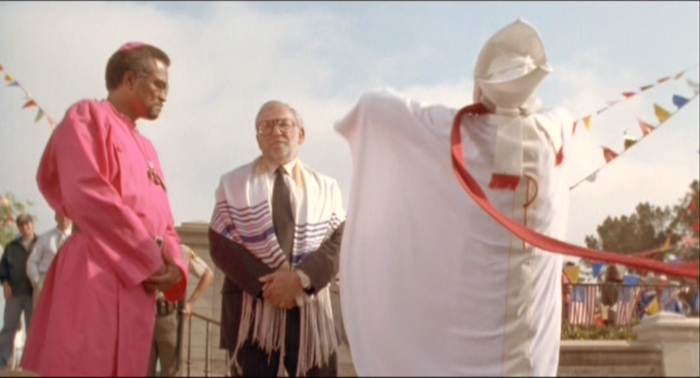 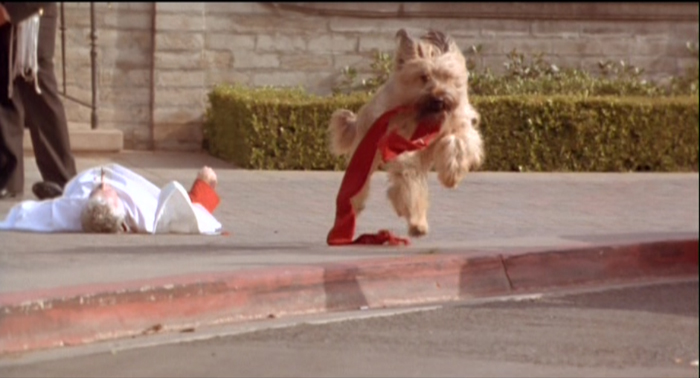 Everybody chases after him (the weirdo donut-hating kid is the only one who obviously thinks it’s funny) and the movie ends on a freeze frame of him running away with the scarf. 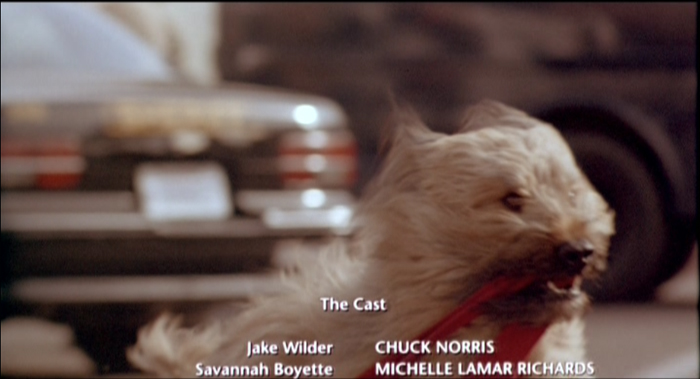 For what it’s worth, Chuck does okay, playing his usual tough guy character exactly like he does in his other movies, even though he’s probly smart enough to know that he’s talking to a dog the whole time and it’s supposed to be funny. And I give the movie some credit for trying to be racially progressive in a genre that’s usually full of stereotypes. He even has an Asian chief (Clyde Kusatsu, PAPARAZZI).

And there are a couple of worthwhile action moments. There’s a scene where the racists ambush him with machine guns while wearing clown masks and one of the clowns runs out of the bushes and does a flip for no reason at all. And I like at the end of that sequence when a car crashes, explodes, flips, slides upside down and then instead of taking the time to walk around to the driver’s side Chuck chooses to kick it so it will spin around. 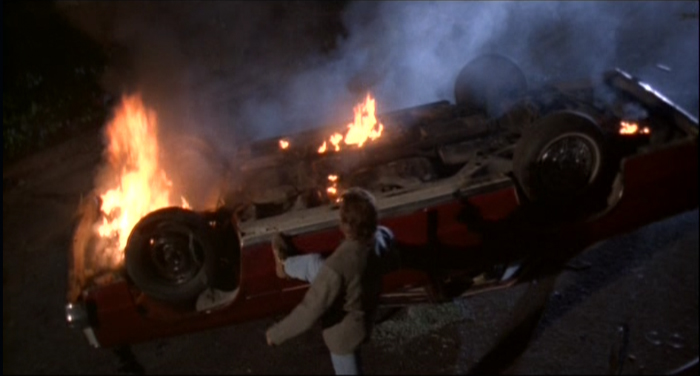 Here’s a little side story for you. In 2004, THE LAST SAMURAI, MYSTIC RIVER, MASTER AND COMMANDER, THIRTEEN and CALENDAR GIRLS showed up illegally on the internet. For the first time Academy screeners that year had special markers on them, and the pirated versions of all of these were traced to screeners sent to Carmine Caridi, who had played Sergeant Grandpa Lou Swanson in TOP DOG. It turned out he had been sending his screener tapes to some guy in suburban Homewood, Illinois named Russell Sprague, who copied 134 of them to DVD and distributed them. He was extradited to L.A. and pleaded guilty to one count of copyright infringement, but died of an apparent heart attack in his jail cell while awaiting sentencing. Caridi claimed not to know Sprague was pirating the movies, but was not supposed to let them leave his house, so he became the first person expelled from the Academy for piracy.

My point is it’s not his fault that FURY ROAD didn’t win. He couldn’t vote.

Anyway, while you’re in San Diego you could check out Balboa Park, the historic site of the Racial Unity Rally climax of TOP DOG. It was a big deal because it was the first time the city had let a movie film there since 1941 (year, not movie). 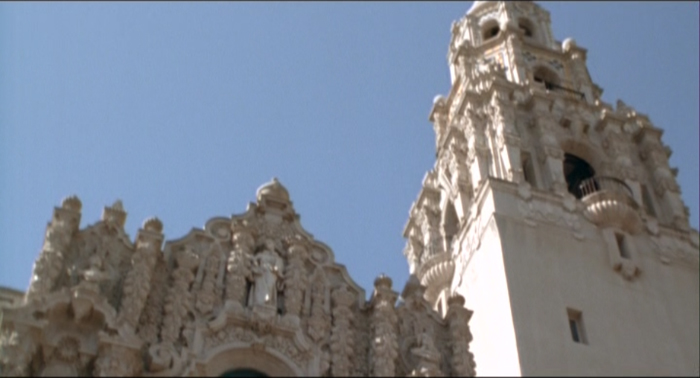 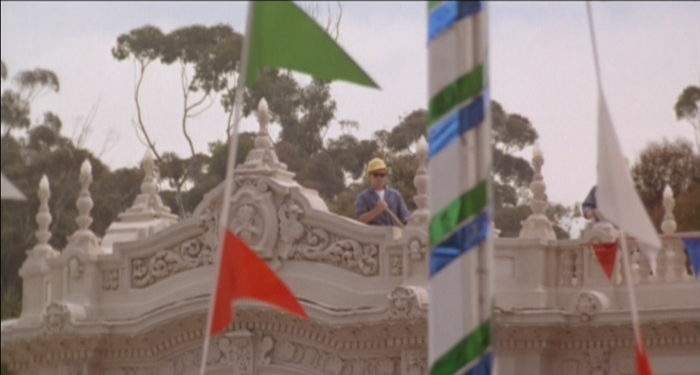 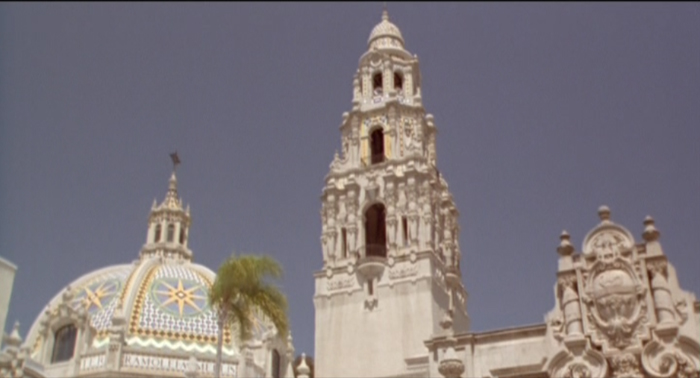 The extravagant architecture and statuary on the belltower and bridges make a unique backdrop for the action finale – a big shootout and bomb disarming sequence that usually would be in a generic warehouse, quarry or shipyard. Sadly, Reno only knocks one guy off a ledge… 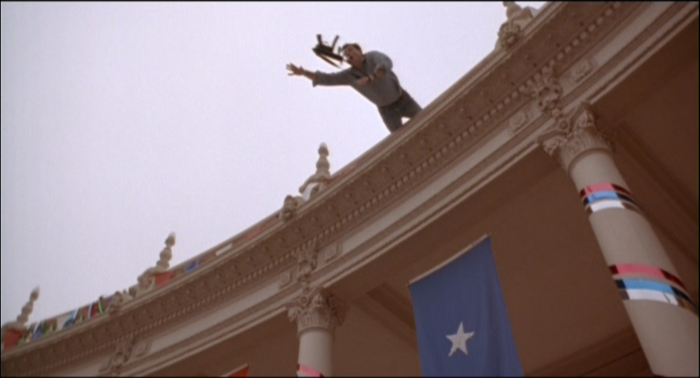 …and then barks at a guy at the end. It’s mostly the humans who do the work.

Still, it looks like a really impressive park on its own, made much more historically and culturally important by being the TOP DOG filming location. Here are directions for how to get there from the convention center. Have a great time everybody!

P.S. The movie that filmed at that park before TOP DOG was CITIZEN KANE, which used it for the exteriors of Xanadu. I don’t know why I bring that up though, that’s not really relevant to the TOP DOG filming locations tour you’re planning. T.M.I. I guess sorry about that

Aaron Norris Carmine Caridi Chuck Norris Clyde Kusatsu Erik von Detten Michele Lamar Richards San Diego
This entry was posted on Friday, July 22nd, 2016 at 10:58 am and is filed under Action, Comedy/Laffs, Reviews. You can follow any responses to this entry through the RSS 2.0 feed. You can skip to the end and leave a response. Pinging is currently not allowed.