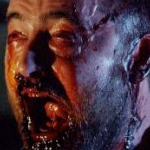 The cover of THE MIND’S EYE quotes a Film School Rejects review saying “The best SCANNERS sequel we never got.” And it really does seem like a SCANNERS sequel, but with the raw feel of a modern low-budget American indie instead of the cheesy ’90s Canadian b-movie style of the official SCANNERS sequels. This actually takes place in 1990, the year before Christian Duguay made SCANNERS II: THE NEW ORDER. So chronologically it’s actually the first SCANNERS sequel.

1990 is also the year that THE MIND’S EYE: A COMPUTER ANIMATION ODYSSEY came out, beginning the popular series of early computer animation clips set to Thomas Dolby and Jan Hammer music. It is not made clear in the movie if the telekinetic powers are supposed to be caused by watching THE MIND’S EYE tapes, but obviously I’m going to assume they are. That was how I got mine.

Zack Connors (Graham Skipper, TALES OF HALLOWEEN) is a dude hassled by cops while walking on the side of the road, not wanting any trouble, like a more nerdy version of John Rambo in FIRST BLOOD. The stress unleashes his telekinetic powers, but the officers still manage to capture him and bring him to the Slovak Psychokinetic Institute, a private facility that’s been looking for him. Once he’s there he demands information about Rachel Meadows (Lauren Ashley Carter, JUG FACE, PREMIUM RUSH, THE WOMAN), who we gather is his girlfriend who also has powers and is also in their custody. 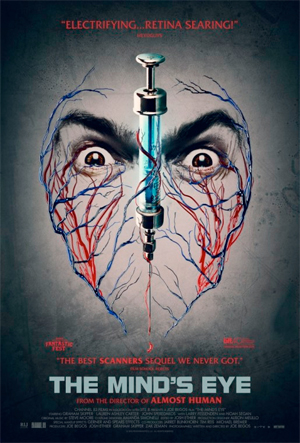 The institute is kind of low rent, run out of a house, which might have to do with the budget of the movie, but I like the absence of the typical antiseptic white rooms and hallways. It’s like a smaller version of The Shop in FIRESTARTER, which is another movie this reminds me of. Dr. Slovak (John Speredakos, WENDIGO, INSIDE MAN, THE HOUSE OF THE DEVIL) is at least as sinister as Martin Sheen in that one. He acts all buddy-buddy telling them he’s helping them control their powers for safety, but really he’s trying to extract something from them that he can inject into himself to get powers. Unethical in my opinion.

After months of living like he’s in rehab, Zack figures out how to bust out Rachel and escape. They fight off security guards and are pursued by vicious goons. They cause furniture to fly into people, lift people into the air, and worse. There’s alot of one actor making crazy eyes and popping a forehead vein while another’s shaky hand struggles to point and fire a gun.

Things get weirder as Slovak becomes more powerful while also physically degrading. He turns into a junkie for scanner juice. A passionate sex scene between our heroes is intercut with him getting injections in the back of his neck, to give you an idea how it feels to him. Total boner killer.

Skipper’s big break was originating the role of Herbert West in Stuart Gordon’s stage musical version of RE-ANIMATOR, but he’s more of an everyman than a Jeffrey Combs. He kind of reminds me of Macon Blair in BLUE RUIN – this is what it would be like if some young dude you knew was a scanner. I think that works both ways – it makes it relatable, but also easier to scoff at. “Come on! Some young dude I knew would never be able to make a chair levitate!”

This is the sophomore film of writer/director Joe Begos, and it’s a little bigger and better than his debut ALMOST HUMAN, but with a similar approach. It’s the same star, it’s a synth soundtrack, it’s labelled a period piece but without period detail, beginning minimalistically but building to some impressive non-digital gore like we used to get in the old days. Yes, there is a (SPOILER) head explosion. I don’t know how they rank head explosions, but I would guess this one’s below the original SCANNERS but above many others on the official list.

I appreciate the earnestness. These are movies that take themselves very seriously, with a complete absence of humor, irony and winky references. I’m pretty sure the movie posters seen on a bedroom wall are for fake movies, even, it’s not some cute head nod. And the score by Steve Moore (CUB, THE GUEST), while fitting into a trend of retro analog synth scores, is completely legit. It drives the feel of the movie with its building rhythms, not with its fetishizing nostalgia. There’s also a credit for “Special Telekinetic Audio Design” by Graham Reznick, which I’d guess is the kind of synthesizery sounds during the mind battles. The disc opens with a title card telling you to turn it up loud.

The look is pretty different from the last movie though. Begos (who is his own cinematographer and camera operator) paints many of the scenes with bold primary colors – lots of eye-popping blue or red light lending a tinge of psychedelia.

Josh Ethier, the alien-possessed killer in ALMOST HUMAN and editor of both movies, shows up as one of the security guys, while Noah Segan, the idiotic gringo villain of REDEEMER, is an eye-patched henchman who comes after them. The best familiar-face, though, is indie horror godfather Larry Fessenden (HABIT) as Zack’s dad, kind of a Dennis-Hopper-in-TRUE-ROMANCE figure, messed up, non-judgmental, protective. It’s a fairly small role, but a good one where he gets to offer a steady presence but then have an outburst of wacko.

My only major criticism of this one is that I wish it had a bigger twist on the subject of SCANNERS. Without Cronenberg’s brain, or his budget, or existing in the early ’80s, you can’t really match the seedy nightmare feel of his underground Canadian telepathy war. But maybe you could do something more drastically different than another persecuted scanner fighting another group trying to weaponize them.

Also I feel if we’re gonna start having more scanner movies we should think of some crazy new things for them to do. In the climax Zack lifts his opponent off the ground with his mind as he’s trying to tear him apart. I’d like to see him lift somebody higher and higher until he can just drop them and make them splat. I hope something like that is being saved for MIND’S EYE COP. Or what about making them poop themselves.

Graham Skipper Joe Begos John Speredakos Larry Fessenden Lauren Ashley Carter Noah Segan Steve Moore telekinesis
This entry was posted on Friday, October 14th, 2016 at 11:52 am and is filed under Horror, Reviews, Science Fiction and Space Shit. You can follow any responses to this entry through the RSS 2.0 feed. You can skip to the end and leave a response. Pinging is currently not allowed.

5 Responses to “The Mind’s Eye”