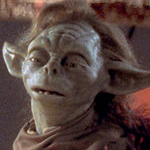 Hey everybody. As you know, certain people enjoy lispy puns, and have turned “May the 4th” into the international day to celebrate Star Wars. Which seemed like a pretty good idea a few years ago when there wasn’t a new Star Wars movie coming out at all times.

You know I enjoy the Star Wars but in case some of you get sick of hearing about it today I thought it would be a good time to re-up one of my favorite series I’ve ever done, LUCAS MINUS STAR WARS. By going through 44 years of everything Lucas had his name on that was not Star Wars-related I think I really showed (or at least convinced myself) what a force (get it) he was in Hollywood even outside of his most beloved creation (Yaddle).

So here for your convenience are links to all Lucas reviews (including a few, like HOWARD THE DUCK, that I wrote before that series) in release order:

And, ah hell, I guess I should include my Star Wars writings too. “STAR WARS NO BAGGAGE REVIEWS” was also a proud time in outlawvern.com history, so here they are plus my Ewok ones and the post-Lucas ones:

George Lucas Star Wars
This entry was posted on Thursday, May 4th, 2017 at 12:24 pm and is filed under Blog Post (short for weblog). You can follow any responses to this entry through the RSS 2.0 feed. You can skip to the end and leave a response. Pinging is currently not allowed.