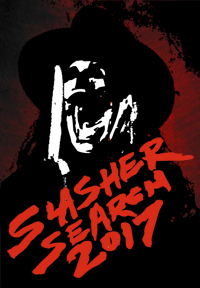 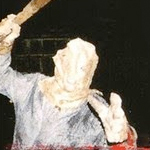 Happy Boxing Day to all of the boxers out there. I have a new review today that to be frankly honest is not gonna be very exciting for anybody because it’s a total obscurity that you never heard of and I’m not recommending it. But for some reason I wrote it, so I thought I should post it before it’s 2018 and I have to stop using  the Slasher Search 2017 logo.

Ordinarily when I’m slasher searching I pin my hopes on movies from the ’80s. That was the prime time for filmatists to have caught the bug from HALLOWEEN and FRIDAY THE 13TH, before they stopped the outbreak of Tom Savini fever and everything got too clean and slick and bland. If a slasher movie came out in the 2000s and I never heard of it I gotta assume it doesn’t have any of the things I’m looking for in the genre.

But I found this random one from 2005 that had a quote from the late great Dan O’Bannon on the box:

“…A CUT ABOVE THE COMPETITION… A THINKING MAN’S SLASHER FILM.”

So I decided to give it a shot. You can’t blame a guy for trying.

At first it’s unclear if there will actually be a slasher involved. The premise (explained concisely in first person narration at the beginning) is that Cassandra (Bobbie Jo Westphal, WISCONSIN DEATH TRIP) once dreamt of her mother being murdered, and then what she dreamed really happened. Now she’s having dreams of old friends from school dying, so she’s invited them to an old farm house to try to keep these prophecies from coming true. 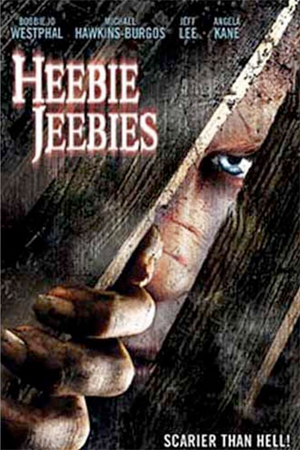 The friends include her soft-spoken, annoyingly intense ex Tony (Michael Hawkins-Burgos, also the co-director, set decorator, production designer, art director and costume designer), “comically” obnoxious Casper (Jeff Lee, CANADIAN ZOMBIE), Casper’s annoyed-with-everything girlfriend Cindy (Vanessa Yuille, THE PUPPET SHOW HAS BEEN CANCELED), spacey-weirdo Alice (Angela Kane) and Kelly (Reaca Pearl). When Alice doesn’t show up exactly when the others do Cassandra gets worried and mentions that she has a brother who likes to play pranks on her. It goes into a whole other story about such a prank, a mini-story complete with Tales From the Crypt style plot twist, but I still didn’t realize right away that this isn’t just a tangent, this is kind of an anthology film.

The prank story explains why Alice is screwy in the head. Another one involves Casper’s twin brother stealing statues from a museum and they come to life TRILOGY OF TERROR style. This section of the movie in particular has a student film feel, if only because the actors seem to be young people playing dress up as older people. Lee wearing an Adam-Yauch-in-Sabotage costume, swearing and pretending to chug whisky isn’t enough to make him believable as a grizzled thief in debt to the mob. Sorry kid. 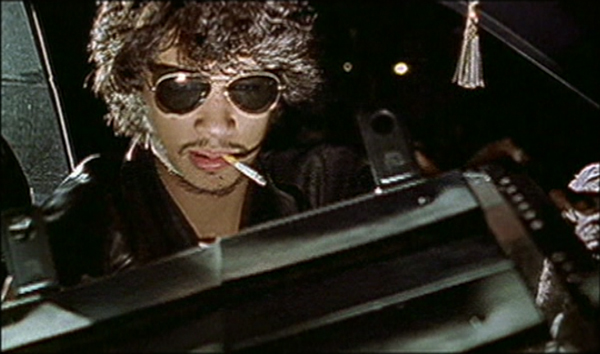 This is also the jokiest section, with one of those EVIL DEAD 2 inspired preparing-the-weapons montages where he tapes flashlights all over himself (the statues are light sensitive), and there are jokes like “he tries to jump into the car window but it’s closed” or “he tries to light his cigarette real cool but the lighter isn’t working.”

I wish they would’ve sprung for a puppet, though. I can understand why young filmmakers in 2005 thought they would add production value by getting a friend who could do a CGI shot, but the crude thing they ended up with does not cut it.

And then there’s a section about Kelly, who runs over a hitchhiker on the way to the get-together. This one is kind of a funny idea, because a passing stranger stops to help her and turns out to be a weirdo Bad Samaritan who pushes her into covering up the accident and disposing of the body, which is not what she wants.

In between these little stories there are some murders happening at the house, and for the finale the killer is revealed and there’s a fight and what not. There’s one really weird thing that happens that must’ve had some reason that wasn’t communicated properly. Cassandra is trapped, scurrying around the cabin for weapons while Tony is struggling for his life. Then when we see her again she has completely shaved all her hair off with a straight razor. She drops the razor to the ground and just punches the killer during a moment of surprise over the baldness.

Huh? The only connection I can figure is that the killer complimented her hair a little bit earlier?

Hawkins-Burgos has a websight with paintings and videos and stuff. No mention of HEEBIE JEEBIES, but there’s a trailer for a 42 minute short called Body Count, dated 2005, that seems to be some iteration of the hitchhiker story. So my guess is they had a couple short films and this was their idea of how to turn them into a feature.

I’ve definitely seen much worse than HEEBIE JEEBIES, and I can see how if O’Bannon was their film teacher or judging a student film contest or something he would be charitable enough to say those (out of context) nice things about it. Unfortunately, though, I’m not in that situation, and I didn’t get much out of watching it. I don’t know if it’s the era or the style or just this specific movie, but it’s not goofy enough in its badness to be funny and not good enough to actually work. If you’re rooting for them you can get as an occasional “oh, they do have a little gore in this part, that’s nice” or an “actually this performance seems more professional than the others.” That’s about it.

Filmed in Milwaukee, I guess it’s a more recent equivalent of the regional horror films I’ve reviewed like THE MEAT EATER and THE NIGHT BRINGS CHARLIE and shit. But somehow those are more interesting when they seem like some mix of passion and vanity project made by some weirdo who got everybody in town to help than when they seem to be made by film students learning what they hope will be their craft. And of course they’re more fun to watch when they’re really dated. I think I’ll stick with the ‘ 80s next time.

anthology Michael Hawkins-Burgos Slasher Search
This entry was posted on Tuesday, December 26th, 2017 at 9:10 am and is filed under Horror, Reviews. You can follow any responses to this entry through the RSS 2.0 feed. You can skip to the end and leave a response. Pinging is currently not allowed.