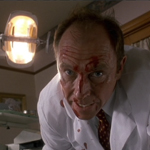 THE DENTIST must’ve done well on video, because they had a sequel ready in two years, with director Brian Yuzna and star Corbin Bernsen both returning. Part 1 screenwriters Stuart Gordon & Dennis Paoli handed the reins to newcomer Richard Dana Smith, who went on to write thrillers (mostly for TV) with the following titles: THE STEPDAUGHTER, THE PERFECT WIFE, ALONE WITH A STRANGER, STRANGER AT THE DOOR, THE PERFECT NEIGHBOR and FRAMED FOR MURDER. THE DENTIST 2 is kind of the weirdo horror movie loving cousin of those types of movies.

The sequel opens with Dr. Feinstone’s dream about practicing dentistry on his ex Brooke (a returning Linda Hoffman, BLACK SCORPION II: AFTERSHOCK) in an all white office. Closeups fetishize her lipstick and nylons – this might be the only movie in cinematic history to cause discomfort by equating dentistry with sexiness. He accidentally makes her bleed, and things get way worse from there.

This is one of the things that haunts him in prison, where he tells his psychiatrist (Rende Rae Norman, TRUE COLORS, The Young & the Restless) that he’s a good person and it was a “stranger” who did all those horrible things in part 1. It’s not like he’s trying to put on a front, though, because he won’t pretend he’s not still violently angry when she asks about his wife cheating on him.

But there’s this crudely stitched wound on his leg that he starts scratching at, and it turns out he has a shiv sewn under his skin which he pulls out to aid in an escape.

This reminds me of THE STEPFATHER, because his m.o. is to move somewhere far away, use a different identity and start all over. He chooses a small town called Paradise, Missouri. I think he intends to live a normal life, not turn into a maniac again, but it’s notable that he’s planned ahead for this: he has cash and fake IDs in a safe deposit box here. The bank manager Mr. Wilkes (Jeff Doucette, voice of possum in DR. DOLITTLE) knows him as Larry Caine from about five years ago. This is a big reveal, because in the first one it seemed like he suddenly snapped. Now we know he’s been living under different identities, preparing for this eventuality.

Wilkes hooks him up with a place to stay, a cottage next door to his pretty niece Jamie Devers (Jillian McWhirter, DUNE WARRIORS, BLOODFIST VII-VIII, STRANGELAND). They immediately fall for each other, despite an awkward incident when she hears furniture breaking and goes to check on him and doesn’t figure out that he’s been cutting his arm with a straight razor.

Clearly things aren’t fine, but maybe everything would’ve worked out okay if not for the bad luck of “Larry” biting something wrong during a dinner date and knocking a cap loose. He goes to see the only dentist within miles, Doc Burns (Jim Antonio, EVE OF DESTRUCTION, PLEASANTVILLE, CATCH ME IF YOU CAN), and while left alone in the chair finds himself in kind of a daze, putting on the ol’ white coat and wandering into the next office to check out an old woman’s mouth. He gets caught and tries to pass it off as necessary – “This woman was in respiratory distress!”

And it doesn’t help that Doc Burns does suck. He doesn’t put on gloves until Larry tells him to! That is so gross. And he doesn’t seem to do good work, because soon after the appointment the cap falls right off again. Larry storms into the office while it’s closed to threaten him with his own golf club, causing him to fall down the stairs and die.

Even still, becoming the new town dentist does not seem to be his plan. He angrily refuses offers to take over his practice until he realizes that since the office is built into a house it will give him a permanent place to live. In the interim there’s a scene where he brings Jamie in to check out her toothache, and fills a cavity. I don’t think this scene even needs the part where he hallucinates bugs in her mouth. Just the idea of having someone do off-the-books dental surgery on you – especially when it’s slightly eroticized like this – is seedy enough. The combination of him being attracted to her and putting dental tools in her mouth has a bit of a Cronenbergian “who would even come up with this kind of shit?” ickiness.

He does men’s teeth too, though. A breaking point is when Clint Howard, as an unnamed loud mouth traveling from “la la land,” knocks on the door after hours begging for help with a toothache. He eventually recognizes him as the fugitive killer dentist he saw on TV, which means it’s time for some extravagant dental gore.

Jamie is a tragic character because she seems nice and reasonable (if bland) but doesn’t consider it a dealbreaker when Larry exhibits extreme jealousy and possessiveness over her friend since childhood Robbie (Lee Dawson, “Officer Martin,” one episode of True Detective). They actually manage to get some dark humor out of it in a scene where he asks her about Robbie while working on a woman’s mouth and the woman picks up on the tension and looks terrified the whole time, trying to help her convince him they’re just friends. Also, Yuzna used it to get some nudity in there by having him peep on an over-the-top sex scene that turns out to be a creepy hallucination. On a date he has a really ugly freakout about Robbie and she still calls to apologize for “hurting” him. Obviously this happens in real life too.

Throughout all this there’s a ticking time bomb: back at home, Brooke (who cannot speak because he cut out her tongue) hired a private detective (Ralph P. Martin, BAADASSSSS!, HAIL, CAESAR!) to find her bastard ex-husband by traveling to all the places represented in his postcard collection. When Brooke shows up and laughs at him we, and he, don’t know if it’s real. And he confuses her with Jamie. She puts him in the dentist’s chair and kisses him with her tongue-stub before trying to take a pair of scissors to his.

This is all leading up to a traditional HALLOWEEN style chase through the house of horrors finding the bodies (but in a dentist’s office), but there are other quirky things on the margins setting it up. I will take the introduction of a Chekov’s nail gun to be an homage to LETHAL WEAPON 2. And I like the too-curious-for-her-own-good bank teller Bev (Susanne Wright, THE BROTHERS SOLOMON), who figures out he’s not who he says he is and gets a dental appointment as part of her independent investigation. That does not turn out to be a smart move, but I admire her pluck.

I suppose we never really needed a sequel to THE DENTIST, but Yuzna delivered admirably on the possibilities for such a thing. These are kind of like the Civic TV version of a Lifetime suspense thriller, and I get a kick out of that.

Brian Yuzna Clint Howard Corbin Bernsen Jillian McWhirter Ralph P. Martin Richard Dana Smith
This entry was posted on Wednesday, November 20th, 2019 at 7:20 am and is filed under Horror, Reviews. You can follow any responses to this entry through the RSS 2.0 feed. You can skip to the end and leave a response. Pinging is currently not allowed.

4 Responses to “The Dentist 2”