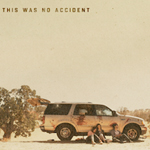 DOWNRANGE is a simple, solid 2017 film by Ryûhei Kitamura (AZUMI, GODZILLA: FINAL WARS, BRADLEY COOPER IN BRADLEY COOPER’S THE MIDNIGHT MEAT TRAIN, NO ONE LIVES) that’s exclusively on the streaming service Shudder in the U.S., though it’s on disc in some other countries. Written by Kitamura and Joey O’Bryan (MOTORWAY, TRIPLE THREAT), it’s about six road-tripping college students who get a flat tire on a highway out in the middle of nowhere and soon realize they’re being targeted by a cruel, patient sniper.

It’s a little odd how abruptly it starts with the blowout – no chance to see them in their normal state of driving. And I was confused by their relationships – some of them don’t know each other, and I thought they were talking about being involved in some kind of race or contest, but I guess I must’ve misunderstood? No matter. You get enough seeds of who they are and what they’re up to in their lives that I genuinely didn’t know which characters were included just to suddenly get shot and kick this thing off. They all seem like they’ll be around for a while.

The minor action classic SNIPER emphasizes how much of a sniper’s job is waiting around for the right moment to take one perfect shot. This is about people on the other end of the barrel waiting around in order to not present such an opportunity. For much of the movie three characters are hiding behind the car while another, more panicked person is behind a nearby tree stump. 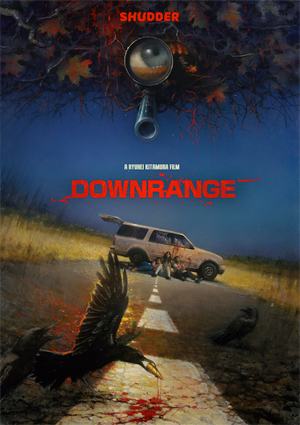 So it’s a trapped-in-a-limited-location movie like PHONE BOOTH, BURIED, GRAND PIANO, CUBE, PANIC ROOM, 10 CLOVERFIELD LANE, SAW, FROZEN, THE SHALLOWS, THE WALL, etc. This is a pretty good one of those, so it surprises you with how many things they find to do or plan or discuss within their constricted circumstances. Trying to get a bottle of water out of the car, dealing with wounds, figuring out what the sniper is capable of, taking video and pausing it when a muzzle flashes to determine where the shots are coming from, debating whether it’s worth it to all run off in different directions and hope he can’t get all of them, trying not to go loopy from the sun or the bleeding.

They’ve established the spottiness of phone reception in this spot, but they figure out they can get a signal just a few feet out from behind the safety of the car. So they try extending a phone out on a selfie-stick, hoping to voice activate a 911 call, but the fucker shoots the phone. Much of the planning revolves around the theory that they could move the car a few feet and safely make the call. But that means getting the key in the ignition and car shifted into neutral without being shot. And then being ready to push the car before it rolls in the wrong direction down the incline.

And of course the script weaves some character stuff into there. Some backstory, some tragedy. The real reason Todd (Rod Hernandez) has a car with lots of space is not that he’s in a band, like he claimed earlier. The true story is not a long one, but it’s painful. During downtime they start to open up about shit like that.

That’s a simple, even minimalistic setup there, and Kitamura doesn’t give in to temptation to overcompensate with the filmatism. Even when he does something cool like rotate the camera to simulate the disorientation of a character laying on the ground bleeding to death, he does it slowly, not in a frenzy.

But he finds other ways to make the movie ferocious. The first death is a shocker – we knew it was coming, but we didn’t necessarily think we were gonna see a bloody, chunky brain tunnel all the way through a guy’s head (shout out to THE QUICK AND THE DEAD). Or that the whole movie would take place next to two of the characters laying dead in the street, blood glistening in the sun, the damage to their flesh never looking any less gruesome, eventually attracting crows and yellow jackets. Or that, when they finally got that car into neutral, they’d lose control of it and it would run right over their friend’s noggin like the melon-headed dummy in THE TOXIC AVENGER.

And he finds ways for it to escalate. There’s an insane car stunt shown from many angles, a horrifying decapitation, a guy running around on fire. I don’t know if you got any of that stuff in PHONE BOOTH. I never saw PHONE BOOTH. But it’s bigger than I expected this to go.

They don’t overcomplicate it. They don’t get into who the killer is or why he’s doing it. He’s not someone they know, he wasn’t wronged by them, they didn’t do something to him last summer. He’s just a sick asshole – nothing more to say about that. I kept thinking he would leave his tree and come around to the other side, and they worry about that too, but determine he’s playing with them. He’s not in a hurry to finish.

At one point they do see something moving on their side, but it’s not him, it’s a wolf. He comes over and you don’t know if he’s just gonna sniff or if he’s gonna start snacking. And none of them thinks to do this:

The toughness and knowledge of Keren (Stephanie Pearson, “Harmony Faith Lane – Age 14,” KISS KISS BANG BANG) is a little goofy at times. They feel they have to explain that she has a bunch of brothers who hunt to justify her rattling off a bunch of information about what type of gun the sniper is shooting with. Some of it, like speculating that he’s using an antique, and later mentioning it again to hype up his skills for being able to shoot so well with it, seems more like showing off than contributing anything useful to their survival. When Eric (Anthony Kirlew) gets shot in the leg she’s yelling at him about elevating it and not falling asleep and I’m surprised she doesn’t exposition that her brothers are also paramedics.

But you know, I trusted her and Jodi (Kelly Connaire) more than Todd, no matter how much his injury and exhaustion transformed him from dorky hipster to grim warrior coated in dust, blood and sweat. They kept their shit together better and came up with better ideas. It’s good to have someone around who holds matches to the end of a hammer and then uses it to cauterize your wound. (I mean, in real life I doubt it would be do-able, but in a movie where it works, that’s a useful skill.)

I definitely don’t think this is one of the greats, but if you’re in the market for more simple, to-the-point horror (many of us enjoyed CRAWL for this reason), DOWNRANGE might do the trick. Now, somebody give Kitamura more money.

Anthony Kirlew Joey O'Bryan Kelly Connaire Rod Hernandez Ryuhei Kitamura Shudder snipers Stephanie Pearson
This entry was posted on Wednesday, December 11th, 2019 at 9:55 am and is filed under Horror, Reviews, Thriller. You can follow any responses to this entry through the RSS 2.0 feed. You can skip to the end and leave a response. Pinging is currently not allowed.