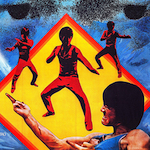 We’ll get back to Summer of 1985 soon, but it’s time for a kung fu break. SOUL BROTHERS OF KUNG FU is a 1977 movie that I never heard of until Quentin Tarantino mentioned it a couple times on the Pure Cinema Podcast. He also said that RZA liked it, and when I noticed the poster for it on a background for RZA’s 36chambers film screenings it reminded me to look it up.

It’s available on Amazon Prime, but be warned that it’s dubbed and with a garbage transfer. Tarantino has said he prefers to watch movies of this era dubbed, but he’s probly seen it projected on 35mm with an audience, which I’m sure makes it more fun. At home streaming it’s amusing, but doesn’t strike me as the classic he considers it.

According to the Hong Kong Movie Database this is also known as LAST STRIKE, KUNG FU AVENGERS, INCREDIBLE DRAGON or TIGER STRIKES AGAIN. The Chinese title, 被迫, seems to translate to something like COMPELLED or FORCED. But calling it SOUL BROTHERS OF KUNG FU emphasizes the presence of African-American newcomer Carl Scott, marketing it for the largely black audience for kung fu movies in the U.S. at the time. Though the poster says “Bruce Li and Carl Scott are the SOUL BROTHERS OF KUNG FU,” the movie focuses more on the relationship between the two Chinese leads, so I thought they were probly the “soul brothers,” bonded like brothers. In their souls.

It’s the story of three friends – Wai Lung (Ho Tsung-Tao, better known as Bruce Li), Siu-San (Lo Meng, FIVE DEADLY VENOMS, MAGNIFICENT WARRIORS, HARD BOILED, IP MAN 2 and 4) and Chai Yun (Auyeung Pui-San, CRIME STORY) who illegally immigrate to Hong Kong, I thought from the mainland, but I don’t think it’s specified. They float in on a boat, barely alive, to the point that Wai Lung has to convince Siu-San not to give up and throw himself overboard. But they get picked up by a ship and next thing you know they’ve got jobs in Hong Kong and they practice their kung fu and seem happy.

One day Wai Lung sees some other workers picking on this young American black man named Tom (Scott). I’m unclear exactly what’s going on there – I think he works there, and those guys are picking on him. Wai Lung hates bullies so he beats those guys up, and takes Tom under his wing for kung fu lessons. He brings him to the roof of a building where he demonstrates “fighting sticks” (nunchakus) and explodes a watermelon that Chai Yun brings for them. (Not in a racist way.) 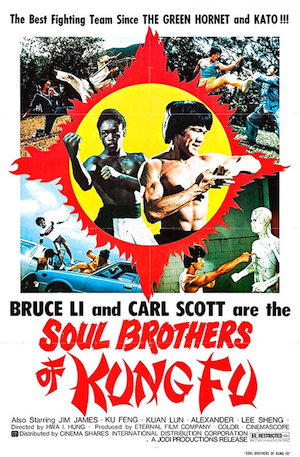 The dubbing of Tom is predictably bad, but not offensive. Despite the mismatched voice there’s something compelling about watching this character, so young and skinny, not looking like somebody you’d expect to see in a movie of this type, but handling his own in various “quarrels,” as one character calls them.

There’s kind of a BETTER TOMORROW thing where Siu-San starts working for the triads and there’s tension between he and Wai Lung’s differing lifestyles. They fight over Chai Yun and then over Siu-San wanting to marry a prostitute. Also Chai Yun worries about Wai Lung because he keeps reading about Bruce Lee and saying things like, “I only wish I could be as successful as him.” To Chai Yun that translates to “I wish I could have a death by misadventure.” She thinks Bruce “went too far, too fast.”

Wai Lung gets involved in competitive fighting and is set to represent Chinese kung fu in a tournament. An opponent’s coach says, “He has no particular style, but he’s very tough, and he fights like Bruce Lee.” Nobody ever comments that he also does his hair just like him.

Part of the tournament footage is tinted red, and I wondered if it was a stylistic choice, but it doesn’t seem consistent, so I think it’s just transferred from a bad print. Kinda cool, though.

Eventually Wai Lung wakes up in the hospital and “they say you may never fight again” due to no specified injury. But he believes “I have one technique to beat him. Iron finger.” This is my favorite part of the movie: he trains with Carl by punching through hanging rings with blades around the inside, so he would cut his wrists if he didn’t do it perfect. Then he shows up BIG BOSS style at the villain’s “villa in the country” to fight all the henchmen and then the factory boss (Ku Feng, HEROES SHED NO TEARS). He not only uses the iron finger, but jumps up and scissors himself onto the guy’s waist, hits him and propels himself into a flip. I like that when he’s knocking a guy in the head with the nunchakus it intercuts the exploding watermelon from earlier.

The upsetting things is that SPOILER in the middle of all this he finds Tom hanging, dead. It’s fucked up – even in a Hong Kong kung fu movie he’s not safe from this shit. A Carl Scott biography I found mentions that it “had multiple endings filmed.” Is there one where the poor kid doesn’t get lynched? That’s the one I would prefer.

Until that kick in the balls the tone is goofy fun, and I particularly enjoyed eyeing the various period fashion, with a heavy emphasis on Adidas track suits (or Adidas-like track suits with too few or too many stripes). I like trying to read the English on the various t-shirts and tank tops. The t-shirt slogans I wrote down are “What You See Is What You Get,” “Track and Field,” “BOOGIE U.S.A.” and “TIGER BASKET BALL.” Also it’s kind of fun to play “spot the music they took from something else.” I noticed CARRIE, LIVE AND LET DIE and nobody could miss how much they use ROCKY.

The action directors are Hsu Hsia (DRUNKEN MASTER) and Yuen Woo-Ping’s brother Yuen Cheung-Yan (TAI CHI MASTER, FIST OF LEGEND, TRUE LEGEND, ONCE UPON A TIME IN SHANGHAI). Yuen Biao and Corey Yuen are some of the fighters and stunt people in it.

Director Hua Shan also did THE SUPER INFRAMAN, Shaw Brothers’ amazing version of an Ultraman/kaiju type movie. He was the cinematographer of THE CHINESE BOXER. After this he did another Bruce Li vehicle called DYNAMO, playing a taxi driver who becomes a movie star because he looks like Bruce Lee. (Semi-autobiographical?)

I’m most familiar with Li from BRUCE LEE: THE MAN, THE MYTH, a movie I taped off cable in the early ‘90s and rewatched many times. It’s a silly biopic mostly concerned (at least in the dubbed version) with demonstrating “Chinese kung fu”‘s superiority over Thai boxing, Japanese karate, etc. by showing how tough Lee is, like when he has a machine to shock himself and keeps upping the voltage (repeated in this movie). I think I still remember some narration verbatim: “Many believe Bruce Lee is still alive, a recluse, waiting to return in the year”… I forget which year, but it was a year long ago.

Though it doesn’t seem at all concerned with painting an accurate summary of his life (you see Brandon only once, I think), they did actually shoot some parts in San Francisco, Seattle and L.A., which is how fifteen-year-old American Carl Scott was able to be an extra, playing one of Bruce’s students. Producer Pao Ming was impressed by him and brought him to Hong Kong during his summer break to train and film THE LAST STRIKE. He went on to star in A HARD WAY TO DIE (a.k.a. SUN DRAGON) in 1979 and KUNG FU EXECUTIONER in 1981. So I have added those to my to-see list.

• And it turns out Tarantino wrote an in-depth, much-more-appreciative-than-mine (except for Carl Scott) review and linked to it free on Youtube (looks like it’s the same transfer as on Prime) on the New Beverly blog

Auyeung Pui-San Bruce Li Carl Scott Corey Yuen Hua Shan Ku Feng Lo Meng Yuen Biao
This entry was posted on Thursday, June 4th, 2020 at 10:10 am and is filed under Action, Martial Arts, Reviews. You can follow any responses to this entry through the RSS 2.0 feed. You can skip to the end and leave a response. Pinging is currently not allowed.