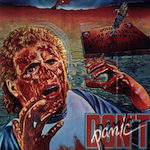 DON’T PANIC, a.k.a. EL SECRETO DE LA OUIJA, is a 1988 English-language Mexican horror film that seems designed to crossover to American audiences, with its lead character Michael (Jon Michael Bischof, who directed a movie called RATAS NOCTURNAS three years later) a blond, curly haired kid who explains in narration that his family moved from Beverly Hills to Mexico City, a situation he considers “the pits.”

By the time of his 17th birthday, though, Michael already has enough friends for a party. His best pal Tony pushes him to play with a Ouija board even though he’s scared of it because of a previous incident involving an entity named “Virgil” who Michael believes is the devil. He keeps saying “I have to go home” to get out of it, which confused me because I was pretty sure this was his home, a theory confirmed by his mom (Helena Rojo, AGUIRRE, THE WRATH OF GOD) coming out and making everybody leave.

Ouija boards aren’t all that out there, but another thing Tony is into is magic roses? To help Michael with a crush on Alexandra (Gabriela Hassel), Tony gives him what he says is a magic rose. When Michael carries it to school to give to her another friend tells him, “You look like a sissy.” (The one thing more annoying to say to someone carrying flowers than, “Oh, you shouldn’t have!”) 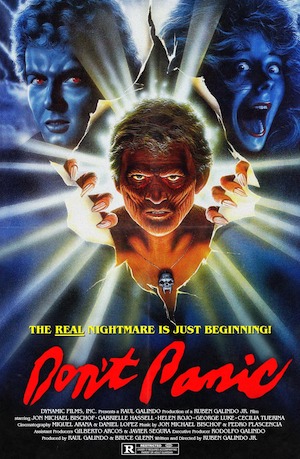 It definitely seems like it’s supposed to be in the vein of A NIGHTMARE ON ELM STREET. Nobody believes him, his mom is an alcoholic, and there’s some pretty good nightmare imagery that’s by budget necessity more in the primal style of part 1 than the more fanciful stuff from the sequels. I like the part where a hand just breaks through the ceiling above him, dripping blood onto his face. I’m not entirely sure how to take it, because he’s asleep and doesn’t see it. But then the feeling of the blood wakes him up and he finds only sweat on his face.

There’s another cool scene that kind of combines the VIDEODROME stretching TV with the famous Freddy-face-coming-out-of-the-wall shot. A face bulges from the screen of a TV, and I’m sure they just projected TV snow onto a sheet of latex with a guy pushing his head through it, but it looks so real! Great job on that one.

As I often do, I would like to urge any production designers doing ‘80s period pieces to take a look at Michael’s bedroom here. He does not have a poster for THE THING or THE EVIL DEAD, but he does have a poster of a white Lamborghini Countache. I had one of those too. We all did. It was our way of life. I don’t know why. I actually did have some pretty cool movie posters growing up but if you’re trying to seem authentic to the period I still recommend the more relatable Lamborghini poster + pictures cut out from magazines of, like, bikini babes or Max Headroom or Spuds Mackenzie or somebody. 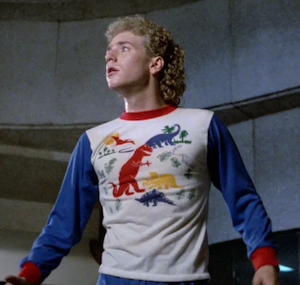 The thing that cracked me up about Michael’s lifestyle is that, for a 17 year old who looks older than that, he sure does wear dinosaur pajamas. It was funny the first time I saw them and then he just keeps them on, including out in public. (There’s a big chase at the hospital where he does a cool move bouncing off a couch to jump out a window.) Later circumstances put him with a mean jock guy carrying a shotgun for defense and saying things like, “Hey, nerd. Get me a beer. C’mon,” and yet he does not seem at all self conscious about his jammies. Finally he changes his shirt and then puts jeans on over the pajama pants.

Unsurprisingly, I am not the only one who noticed the dino-PJs. Upon further investigation I learned that Vinegar Syndrome features them in their newly commissioned cover art and even sold a facsimile of them in conjunction with the blu-ray release. Sorry, they sold out of them already.

He also has a friend named Bobby (Raul Araiza, THE BLUE IGUANA) who ends up in public wearing tighty whiteys and a Swatch muscle shirt. So maybe this is drawing on standard dream fears of being improperly attired in public.

In the most uncomfortable scene, Michael shows up at Alex’s house to warn her about supernatural danger, and her family is rich and has a senator over for dinner and they invite him to join them. It’s very clear that this is not gonna be something that makes a good first impression on the parents, but I was not prepared for him to hear voices and then pull out a gun and started firing it.

Eventually Virgil takes form and he has a monstery face not too dissimilar from Freddy, but with hair. When he says “April Fools!” it definitely seems like one of those ‘80s slasher one-liners Freddy popularized. The final showdown is pretty cool even though the way to defeat him is just to use a magic dagger that Tony has – or, as Michael calls it, a “weird knife… it’s got like…demon marks on it.”

I should note that the very first sound heard in DON’T PANIC is that cliche ‘80s synth sound I’m so fascinated with called “Digital Native Dance”:

So this is not what I would personally classify as a “good” movie. But I kinda enjoyed it because it has that nostalgic vibe of “this is what we wore in the ‘80s, this is what horror movies looked like in the ‘80s” combined with the odd feeling of a movie from another part of the world deliberately trying to mute the things that would be specific to its own culture, but of course not feeling quite like the American movies it’s trying to fit in with. That gives it kind of an unsettling quality that I Iike.

As I mentioned, Vinegar Syndrome put it out on Blu-Ray. It’s also currently on Shudder.

Digital Native Dance Helena Rojo Jon Michael Bischof Mexican horror Vinegar Syndrome
This entry was posted on Monday, April 26th, 2021 at 11:00 am and is filed under Reviews. You can follow any responses to this entry through the RSS 2.0 feed. You can skip to the end and leave a response. Pinging is currently not allowed.