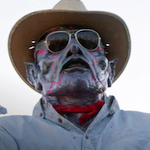 As you may know, I can sometimes be a grump about horror comedies, because I’d rather be watching a horror movie that’s funny than a funny movie that references horror. But here’s a movie that’s on Shudder and has gore in it that is a straight up comedy and I kinda loved it.

The closest I can come to succinctly describing the vibe of PSYCHO GOREMAN is “that movie STAR KID combined with THE TOXIC AVENGER.” Or “WISHMASTER meets POWER RANGERS but a comedy.” Or “THE GUYVER meets SATAN’S LITTLE HELPER.” It’s about two little kids who find an alien artifact called “The Gem of Praxidike” buried in their backyard and then learn that it gives them power over a murderous alien supervillain the opening narration describes as “a nameless evil” and “ruthless being” that “had amassed power beyond measure, and was preparing to strike down all that was good and just in the universe.” He says he’s called “The Arch-Duke of Nightmares,” but Mimi (Nita-Josee Hanna) and Luke (Owen Myre) think that’s stupid, so they rename him Psycho Goreman, or P.G. for short. And Mimi treats this hateful monster as her personal play thing, making him do silly things and not really caring when he uses his powers to turn people into goo.

Like the GUYVER movies, part of the fun is the impressive creature designs and elaborate, rubbery effects created on a modest (but clearly not shoestring) budget. There’s a whole alien council of robot people, talking brains in jars, etc., and an army of P.G. disciples called The Paladins of Obsidian. Some of them have names like Darkscream and Witchmaster, and they’re genuinely cool in a Power Rangers/Transformers/Voltron sort of way. Here are two of my favorite minor characters:

But I cannot claim that the movie is in any way playing it straight. For example, the reason the kids are digging around in the backyard in the first place is that Mimi wins a bet that gives her the right to bury Luke alive. He accepts this fate like a true sportsman, and somehow single-handedly digs a cave-sized hole for himself.

That’s an odd thing about this movie that really cracks me up. I don’t know if I’ve seen another movie where the protagonist is a little girl who’s just a complete asshole. I doubt this is the intent, but her dialogue plays to me like a hellish exaggeration of a type of children’s entertainment that horrifies me whenever I stumble across it on TV, where precocious tweens glibly deliver hacky sitcom insults under the theory that it’s adorable for somebody to be an obnoxious little cock if they’re too young to get punched in the face for it. Here the novelty is a little girl not wanting to call the police because “I don’t trust cops,” or telling a boy, “Hey cutey, you look good in your little… outfit there. Why don’t you give us a spin, hunky boy?” or replying to P.G.’s “Know this, the power you wield will be short-lived” speech with an impatient, “Sure, sure. But first, let’s test this baby out,” or ending a prayer by saying, “Why am I even talking to you? There’s a new god in town, and his name is Psycho Goreman, and he’s comin’ for you, buddy!” Then breaking her crucifix over her knee. You don’t see that on Nickelodeon, usually.

Without being a period piece or anything it seems nostalgic for children’s entertainment from somewhere around the late ‘80s or early ‘90s – the monsters, the humor, the authentically over-earnest end credits rap song about what we just saw happen. But it mashes that up with a rowdy and dark grossout humor – heads ripped off and exploded, P.G.’s mouth expanding to graphically chew up and swallow entire beings, a cop turned into a hideous zombie with a VIDEODROME bio-gun-hand that he tries to use to put himself out of his misery. It really does remind me of what I liked about the best Troma movies back in the day, but the filmatism is much better.

And it also just has a nice sense of silliness. P.G. transforms Luke’s friend Alasdair (Scout Flint) into a giant brain with eyeballs and tentacle arms; this never changes, and he just has to learn to be okay with it, and get the occasional pep talk to cheer him up. And they have a band with brain-Alasdair on keys and P.G. on drums. During a rock out montage there’s also a good old fashioned trying-on-different-outfits montage. Although P.G. has previously just walked around in public as a monster, suddenly he tries to pass in sort of a cowboy outfit with sunglasses. And this is a movie that understands that it can be funny to have a monster wear sunglasses, or to ask a human child “What… is love?,” or to not be able to do anything about it when a little girl throws something at him and says, “Heads up, dumpy butt!”

There’s not a moment of sincerity in this movie, especially when they homage sweet moments from E.T. or T2. And I’m not sure there’s any substance to it either, but if there is it’s an anti-authority message in the way it presents cops and parents as idiots incapable of helping you. More importantly, no less an authority than the omniscient narrator (Kenneth Welsh, DEATH WISH V, TIMECOP, SURVIVAL OF THE DEAD) presents it as a Saturday morning cartoon style good vs. evil scenario, but we can see for ourselves that it’s, as Mimi puts it, “a huge battle between evil and worse evil.” Pandora (Kristen MacCulloch, voice of Anna Tierney), a member of the “forces of light” called the Templars, says things like “the light of Heaven will always extinguish the darkness of evil” and “may the gods watch over me” while she’s crushing a random human into a cube, smashing her on the table and wiping the blood all over her face. And though it doesn’t justify any of the stuff he does,when P.G. tells his backstory (“a tale soaked in the blood of a million dead memories”), it involves his entire planet being enslaved by the Templars before he overthrows them with the powers of the gem. (“Well, that boring dumb story made me tired,” Mimi says when he finishes.)

Director Steven Kostanski and production company Astron-6 are behind a number of mostly postmodern-grindhouse type movies I’m aware of but haven’t seen. They started with MANBORG in 2011, but maybe got the most attention with the more serious THE VOID in 2016. And then they did LEPRECHAUN RETURNS. I guess I should check out more of their stuff.

Astron-6 Kenneth Welsh Shudder Steven Kostanski
This entry was posted on Tuesday, June 22nd, 2021 at 6:59 am and is filed under Comedy/Laffs, Monster, Reviews, Science Fiction and Space Shit. You can follow any responses to this entry through the RSS 2.0 feed. You can skip to the end and leave a response. Pinging is currently not allowed.