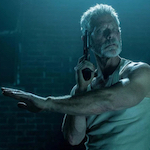 Your mileage may vary, but I loved DON’T BREATHE, director Fede Alvarez’s followup to his EVIL DEAD remake, once again produced by Sam Raimi. It was a hit at the time, and they talked about a sequel, but Alvarez was getting bigger offers, like THE GIRL IN THE SPIDER’S WEB. Which I also liked, but it didn’t really catch on. Now five years have passed, and I haven’t noticed DON’T BREATHE turning into a big thing, but we finally got that sequel, written and produced by Alvarez and directed by his usual co-writer Rodo Sayagues, in his directing debut. Hey, I’ll take it!

Stephen Lang (MANHUNTER, HOSTILES) returns as “The Blind Man,” or Norman Nordstrom as he is apparently named. He’s a Gulf War vet who lives in a rickety house in a largely abandoned area of Detroit with a rottweiler named Shadow and a young girl named Phoenix (Madelyn Grace, 2 episodes of Z-Nation). He home schools her, trains her in survival tactics, and only rarely allows her to go into town with his Army Ranger friend Hernandez (Stephanie Arcila, Penny Dreadful: City of Angels).

Phoenix calls him Dad, and we have to wonder what’s up here because we’ve seen part 1. In that one he was a victim of home invaders and went uncomfortably far in exacting his vengeance on them, then he was revealed to (SPOILER FOR THE FUCKED UP TWIST IN PART 1) have the woman who killed his daughter in a hit-and-run accident imprisoned in his basement, pregnant with a “replacement.” So there are many reasons for concern here. END_OF_DOCUMENT_TOKEN_TO_BE_REPLACED