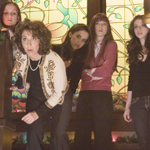 I skipped BLACK X-MAS for six years ’cause everybody told me it was bottom-of-the-barrel, but after I heard Brian Collins and some guys discuss it on some podcast about their favorite horror remakes I decided to try it out this year. Of course it’s a disgrace to the pioneering original Bob Clark BLACK CHRISTMAS from 1974. But it’s a fun disgrace.

Like the original it’s about some sorority sisters (and one sorority den mother, or whatever it’s called) staying in the house on Christmas break, being harassed on the phone by some weirdo named Billy who stalks them and suffocates one or more of them with a plastic bag and leaves her in the attic in a rocking chair and nobody finds her for a while. It skips the original’s thread about a father going around trying to find his daughter, preferring to keep the cast mostly male-free and most of the running time isolated to the one location. But the biggest and boldest change was to give the killer a backstory.
END_OF_DOCUMENT_TOKEN_TO_BE_REPLACED