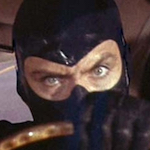 Mario Bava’s DANGER: DIABOLIK stars John Phillip Law, who to me will always be Pygar, the blind angel of love from BARBARELLA. This one came out earlier the same year, 1968, and kinda seems like BARBARELLA’s evil crime movie cousin. It is in fact another Dino De Laurentiis international co-production based on a comic book, and reportedly uses some of the same sets (though I’m not sure which ones). It feels very much like a super hero movie at the beginning: we hear police talking about Law’s character Diabolik as some kind of legendary figure, he first appears in a long black car (Jaguar, not Batmobile), he shows up in a mask, does his thing, makes an escape to a secret entrance to an amazing hidden base inside a cave. But this guy is no super hero, he’s just a thief with a whole lot of flair.

Police Inspector Ginko (Michel Piccoli, THE DISCREET CHARM OF THE BOURGEOISIE) is determined to not let Diabolik steal the $10 million that needs to be transported, going out of his way to deliver decoy money and send the real shipment in a Rolls-Royce with cops disguised as diplomats. But that car finds itself engulfed in plumes of multi-colored smoke and then lifted up by a crane operated by by Diabolik. The camera zooms in on him for a diabolical laugh when the title comes up. END_OF_DOCUMENT_TOKEN_TO_BE_REPLACED 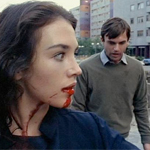 I’ve been meaning to see POSSESSION – the 1981 French/West German co-production from Polish director Andrzej Zulawski – for years. I’ve heard superlatives from its devotees, knowing little of its plot, just a description of its strange, arty vibe. But holy shit does it live up to the hype!

It’s a crazy fuckin horror movie. It’s a crazier fuckin relationship drama. Mark (Sam Neill right after OMEN III: THE FINAL CONFLICT) comes home to Berlin from a business trip, meets his wife Anna (Isabelle Adjani, THE DRIVER) outside their apartment, is frustrated that she hasn’t made a decision yet. It seems things are not working, they don’t know what to do, and are doing a bad job of faking it in front of their young son Bob (Michael Hogben). Anna is manic and indecisive, and Mark finds out she’s been sleeping with some guy he doesn’t know named Heinrich (Heinz Bennent, THE LOST HONOR OF KATHARINA BLUM). END_OF_DOCUMENT_TOKEN_TO_BE_REPLACED

WHITE BUFFALO opens with dread as John Barry’s eerie horror score rumbles through a view of a huge white buffalo grunting and snorting like a demon in a spooky cave somewhere. It feels like a nightmare and it is one. It belongs to Charles Bronson. He not only wakes in fright, he wakes with two pistols in his hands and he unloads them into the ceiling of the train car where he’s staying. Luckily nobody was upstairs and they let him off with a warning. END_OF_DOCUMENT_TOKEN_TO_BE_REPLACED