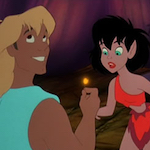 It reunites PUMP UP THE VOLUME couple Christian Slater and Samantha Mathis, this time with Mathis as the lead and Slater as the jealous secondary boy in her life. Mathis (before SUPER MARIO BROS.) plays a hummingbird-sized fairy named Crysta, and Slater is her shirtless male friend Pips. They fly around and can turn into blue and green (respectively) light and they live in a rainforest that’s supposed to be in Australia and has kangaroos and platypuses living in it. Also there are little goblin guys voiced by Cheech and Chong who fly around on large beetles, but I was a little distracted that they sit on top of their wings, so the beetles seem to just magically float. END_OF_DOCUMENT_TOKEN_TO_BE_REPLACED 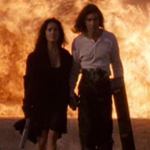 DESPERADO is my favorite Robert Rodriguez movie. People will always say the scrappy, home-made, subtitled EL MARIACHI is better, and a strong argument could be made for FROM DUSK TILL DAWN, with its Tarantino script and movie-star-making performance by George Clooney. But to me DESPERADO is his purest expression, the full enthusiasm of a young, hungry Hollywood rookie high on spaghetti westerns, John Woo and what his new friend QT was up to, fired into a full-blooded action movie uniquely based in Mexican culture.

The Tarantino influence shows in the talky opening with Steve Buscemi as the Mariachi’s hype man/street team, loudly telling tall tales about him in a bar, and in the scene where Tarantino himself plays a criminal telling a long-winded joke about peeing. But otherwise this has an identity very different from the wave of ’90s crime films, one that’s more visual and musical. He uses lots of slo-mo and dissolve edits working in tandem with a driving Latin rock score by Los Lobos. This is just one example of how the fresh Hollywood hotshot used his newfound resources while insisting on doing it his way. Another is the casting of the leads. END_OF_DOCUMENT_TOKEN_TO_BE_REPLACED

MACHETE is the story of Machete, a man with alot of machetes. That is why he is named Machete. Danny Trejo (MARKED FOR DEATH, URBAN JUSTICE) stars alongside Steven Seagal, Robert DeNiro, etc.

You know what, I just remembered that you guys already know what MACHETE is. END_OF_DOCUMENT_TOKEN_TO_BE_REPLACED