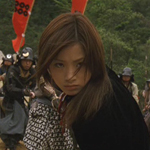 Thanks for the warning, fellas. AZUMI 2 is no AZUMI. I had known director Shusuke Kaneko as being good at giant monster and horror type pictures, and I really thought his cleverness and style would apply well to our little badass raised in the mountains to be the ninja assassin orphan girl with the purple cape. But maybe with this one he caught a tough break. Either the budget was much lower or they just didn’t know how to use it as well as Kitamura did. Lots of standard woods and dirt, looking cinematic than ’90s syndicated TV show. Like Xena or something.

I didn’t really mind that (spoiler? unspoiler?) negotiations prevent us from having a huge climactic massacre like in the first one. That part feels kinda ballsy, I can respect that. It’s progress for the character and her story instead of just more of the same. What was disappointing was that the first one had that incredible village set that was so integrated with (and wrecked by) the battle. This one is just in an ugly clearing. She could’ve killed 700 people, it still would’ve seemed like a step down. END_OF_DOCUMENT_TOKEN_TO_BE_REPLACED