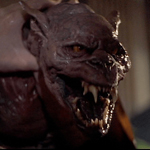 This is the age of home video and having a TV in your bedroom, so our teen protagonist Charley Brewster (William Ragsdale, ROAD HOUSE 2: LAST CALL, Justified) is very familiar with horror movies, having watched many of them as presented by the local horror host and former star of Hammer-esque vampire films Peter Vincent (Roddy McDowall, CLASS OF 1984 [which was written by Holland]). In the opening scene he’s got Vincent’s show “Fright Night” on in the background while he attempts to make out with his reluctant girlfriend Amy (Amanda Bearse, Married… with Children). Then he happens to look out his window and sees his new next door neighbor Jerry Dandridge (Jack Skellington himself, Chris Sarandon) getting it on with a woman who is found murdered the next day. After some spying Charley sees Jerry turn into a bat and have fangs and claws and suck blood, so he determines that Jerry is a vampire who is luring women to his house and killing them. For some reason nobody believes him. END_OF_DOCUMENT_TOKEN_TO_BE_REPLACED 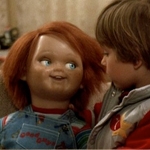 We all know Chucky, the vulgar, red-haired, Jack-Nicholson-sounding killer doll. He’s almost as famous as Freddy or Jason, characters that you don’t have to watch horror movies to be aware of. But when I first saw CHILD’S PLAY in 1988 I honestly didn’t know it was gonna be a killer doll movie. The poster/newspaper ad only showed Chucky’s evil eyes hovering in the sky over little Andy’s babysitter plummeting from the window of their Chicago apartment. A TV ad showed a quick glimpse of him attacking, but I remember thinking of what I was looking at as some kind of crazy witch lady. Maybe a killer dwarf?

An exciting moment in my recent trip to Vegas was seeing a portrait of Chucky and his bride Tiffany posted in the tiny lobby of an Elvis chapel along with Rob and Sheri Moon Zombie, Jon Bon Jovi and somebody he married, Richard Belzer just by himself. There were plenty of horror movies in 1988, but I doubt they’d hang pictures of the killers from BLACK ROSES or HIDE AND GO SHRIEK or even MANIAC COP in there (although that would’ve been a thrill too). Chucky has lasted.

Like anyone I enjoy the pop culture phenomenon of Chucky, most of his sequels and the absurd places this series has gone, but CHILD’S PLAY is something different. It puts a serial killer into the doll in the opening, then puts the doll in the arms of a child and makes us dread what will happen – what is happening when we’re not looking – until near the end. We look accusingly at the doll sitting there limply. We know you’re in there, you asshole. Why won’t you show yourself? For most of the movie his conniving happens in whispers we can’t hear, in low-to-the-floor POV shots, his little hands reaching out, or in quick glimpses, a little thing running by in our peripheral vision. When we finally do get a good look at him in his living-doll form it feels like we caught a bigfoot, or walked in on that dude in the bear costume in THE SHINING. Something we’re not supposed to be seeing. END_OF_DOCUMENT_TOKEN_TO_BE_REPLACED

I think SAFE is easily one of Jason Statham’s best starring vehicles so far. It’s a less cartoonish tone than the TRANSPORTERs (and obviously the fuckin CRANKs) but still firmly planted in the world of action movies, where one guy if he’s tough enough can use his brains, fists and guns to take on two warring gangs and a corrupt police force. So it’s probly somewhere in between THE MECHANIC and BLITZ on the seriousness charts, but a little more fun than either of them.

END_OF_DOCUMENT_TOKEN_TO_BE_REPLACED

As a Chris Tucker fan in a white-people-heavy part of the country I too often find myself defending the kind-of-funniness of RUSH HOUR. I don’t love the movie or anything (MONEY TALKS is the real classic) but I have to admit that every time I come across it on TV I find myself laughing at the shit Chris Tucker says and saying, “I forgot how funny this was.”

I realize that you all think I’m crazy for that, so I got a new argument in defense of RUSH HOUR, and it’s called COLLISION COURSE (1989). You think RUSH HOUR is such a terrible movie – well, what about the version where instead of Jackie Chan it’s Pat Morita, and instead of Chris Tucker it’s god damn Jay Leno? This is a generic mismatched buddy-cop picture only made novel by the rare hero role for the famous Tonight Show host/usurper. It’s funny – not in the sense that the jokes are funny, but in the sense that it’s sometimes interesting to look back at older movies and remember what was considered cool or funny at that time. END_OF_DOCUMENT_TOKEN_TO_BE_REPLACED