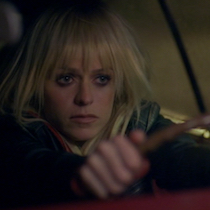 BANSHEE is a pretty cheesy 2000s crime/action type movie I added to my Letterboxd watchlist long enough ago that I don’t remember where I found out about it. I think I was scouring for movies directed by women that were more in the b-action type zone I prefer instead of the respectable stuff you usually see on lists. So I came across this obscure car thief movie I’d never heard of from Canadian director Kari Skogland and screenwriter Kirsten Elms (TEXAS CHAINSAW 3D).

Skogland’s filmography at the time included CHILDREN OF THE CORN 666: ISAAC’S RETURN and LIBERTY STANDS STILL starring Wesley Snipes. And, unsurprisingly, she’d done a bunch of episodic TV work including Dead at 21, La Femme Nikita and The Crow: Stairway to Heaven. In the intervening years she’s become a little more high class, doing episodes of Boardwalk Empire, The Americans and The Handmaid’s Tale, and most recently she directed and executive produced the entire six-episode run of The Falcon and the Winter Soldier. END_OF_DOCUMENT_TOKEN_TO_BE_REPLACED