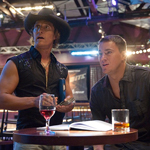 Remember when it got out that Channing Tatum had been a stripper before he was an actor? I forget if he said it in an interview or if it was Wikileaks or something, but there were alot of stories about it in the entertainment journalism and it was a big joke to everybody. But who’s laughing now, motherfuckers? Tatum found the best possible way to own that on the set of HAYWIRE when he convinced Steven Soderbergh that his experiences would make a good movie. It might’ve gone a different way if it was on the set of GI JOE and it was Stephen Sommers that ended up directing MAGIC MIKE. But Soderbergh is the guy to take any subject matter, find what’s interesting about it, bring out the innate and sometimes unknown talents of his cast, and shoot it beautifully. He’s made one of his little independent character pieces, but he threw in just enough shirtless cowboys humping stages to advertise that for the ladies.