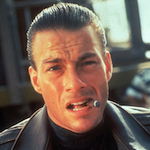 “All right, you want some real action, tough guys? Let’s do it.”

While the summer was dominated by the expensive studio action spectacles TERMINATOR 2 and POINT BREAK, there were plenty of solid action movies made with a little less money and a different type of star power. Case in point: Jean-Claude Van Damme was in the process of rising from the new Cannon Films guy to household name. By this point he had starred in BLOODSPORT, CYBORG, KICKBOXER, LIONHEART and DEATH WARRANT. The latter two had been his largest, with budgets of about $6 million each. This one jumped up to $15 million.

It was worth paying more for this gimmick: Van Damme plays twins. Originally conceived as an adaptation Alexandre Dumas’ The Corsican Brothers, it’s a story about brothers separated at six months old and reuniting at 25 to avenge the murder of their parents. END_OF_DOCUMENT_TOKEN_TO_BE_REPLACED