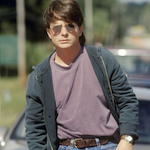 Don’t get me wrong, I didn’t hate watching DOC HOLLYWOOD 30 years later. But jesus christ, this type of movie. Michael J. Fox (CLASS OF 1984) stars as Dr. Benjamin Stone, an arrogant Washington D.C. emergency room doctor who gives it all up to become a plastic surgeon on the other coast. “Okay, question: Beverly Hills, beautiful women and plastic surgery – what do these three things have in common? Me, in less than a week,” he says to another doctor, clearly convinced this is a fuckin cool thing to say. And then he puts on his LEON-style round glasses, gets a bunch of gum and toothpicks to chew on, and hops in his red ’56 Porsche Speedster to head for the 90210.

But on his cross country drive (during which he laughs at how fucking awesome he is when he drives on a shoulder to pass a bunch of traffic) he crashes literally into a white picket fence and is forced to to do community service at a small country hospital in “the Squash capital of the south” on “the buckle of the Bible Belt.” Seems like a pain in the ass at first, but then he Learns a Valuable Life Lesson and/or Discovers What He Really Wants Out of Life. (This story was later remade as Pixar’s CARS and Vanilla Ice’s COOL AS ICE.) END_OF_DOCUMENT_TOKEN_TO_BE_REPLACED