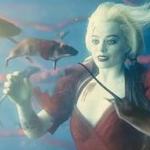 THE SUICIDE SQUAD, from writer/director James Gunn (SLITHER, SUPER, writer of TROMEO & JULIET and DAWN OF THE DEAD) is kind of miraculous as far as these big ol’ corporate franchise movies go. Imagine the odds against a director starting out as a writer at Troma, making some well-liked-but-not-super-successful hard-R comedies, then going mainstream with two beloved Marvel hits, then being temporarily fired by Disney due to right wing trolls feigning offense at his old tweets, and spending his time off going over to a different comic book universe to make a super gory and death-filled but heartfelt sequel to someone else’s widely-hated part 1, building off of his horror comedy past, the skills he built on his GUARDIANS OF THE GALAXY movies, and what was fun about that first SUICIDE SQUAD movie, to make something really special?

Though I didn’t hate David Ayer’s 2016 SUICIDE SQUAD the way most seem to have, I had many complaints. I suspect he had a more sensible version before the studio literally hired the trailer company to re-edit it, but even in its present form I think the movie deserves praise for establishing a rowdy, cartoony take on the DC Universe that BIRDS OF PREY and now this were able to riff on and use as a jumping off point. And of course even bigger than that is its casting of Margot Robbie (THE LEGEND OF TARZAN) as Harley Quinn, as close to a universally beloved character and portrayal as has ever come out of such a widely hated movie. END_OF_DOCUMENT_TOKEN_TO_BE_REPLACED