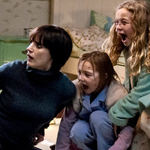 lly a director you like producing somebody else’s movie doesn’t mean much. See for example Sam Raimi. Love the guy’s directorial works, but look at the stuff he and his company produced – not necessarily the seal of quality. I’m starting to see Guillermo del Toro is different, though. I still gotta see THE ORPHANAGE, but most people seem to speak highly of it. I loved DON’T BE AFRAID OF THE DARK and now this one is pretty good. These last two are movies where he found new filmatists who had done short films and helped them to make a feature.

In this case the director is Andres Muschietti, who wrote the script with Neil Cross and his sister Barbara Muschietti. (That’s kinda cool, I don’t know of another brother-sister filmmaking team other  than the Wachowskis. And I guess Joie Lee wrote CROOKLYN.) They’re “adapting” it from their short film of MAMÁ, but I put adapted in quotes because there really isn’t a story in the short version, it’s basically just a cool shot (which is replicated in the feature version). I have no idea how del Toro figured out from that clip that this guy could direct a real movie that tells a story and has acting in it, but somehow he guessed right. END_OF_DOCUMENT_TOKEN_TO_BE_REPLACED