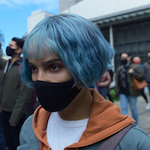 We could call it a techno thriller because the titular “Kimi” is a Siri or Alexa type device through which our heroine, Angela Childs (Zoë Kravitz, THE BRAVE ONE, ASSASSINATION OF A HIGH SCHOOL PRESIDENT), accidentally hears a murder. Her job is to listen to recordings of times Kimi didn’t understand what people were asking for, figure out what the miscommunication was (a regional term, a pop culture reference, a word used incorrectly) and add new information to improve the algorithm. When she hears something disturbing in the background of a recording she does some sleuthing, tries to navigate the company’s dense protocols for handling such a situation, and becomes a target. END_OF_DOCUMENT_TOKEN_TO_BE_REPLACED

Tiny: The Life of Erin Blackwell 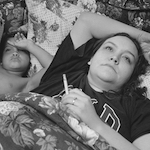 Back in 2003, a whole voting-age-person ago, I wrote about the 1984 documentary STREETWISE, along with a fictional movie somewhat inspired by it, and by the same director, called AMERICAN HEART. The latter is interesting, the first is a straight up masterpiece. You can read that review (though I’m embarrassed of a few lines – nothing too bad, but I was stupid back then) but the gist is that STREETWISE is an incredible movie about a group of teenage runaways who used to hang out on the block between 1st and 2nd and Pike in Seattle. Kind of the main character was a 14 year old girl nicknamed Tiny. She lived in an abandoned hotel with her boyfriend Rat, had a badass red jacket and mullet, also the poor girl was a prostitute and they actually had footage of her getting picked up by the world’s worst grandpas. She said she hated doing but she liked the money and kinda laughed about it. The movie vividly illustrates that some of these people you walk past on the street every day maybe have it even harder than you would’ve guessed, and also are just really interesting people worthy of love and compassion that they don’t get much of.

Of course I live in Seattle, and back when I first saw it I walked near there every day on my way to work, so the movie haunted me for a long time. As I wrote in the review, “It kind of feels like spying on ghosts or something. After watching the movie you find yourself trying to calculate how old these people would be now and guess if they’re still alive. Would you recognize them if you saw them walking around somewhere?”

Well, there are three pieces of news here. One, this great movie that was only available on VHS in the U.S. is finally easy to see because Criterion released it on blu-ray and DVD on Tuesday. Two, it comes complete with the 2016 followup film, TINY: THE LIFE OF ERIN BLACKWELL. Three, that’s a great movie too. END_OF_DOCUMENT_TOKEN_TO_BE_REPLACED 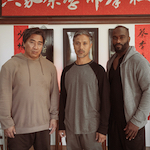 THE PAPER TIGERS is a warm-hearted indie underdog comedy set in the martial arts world. It’s about three former American gung fu (that’s the spelling and pronunciation they use) prodigies now living unremarkable middle aged lives, who reunite after their master is killed. It has a smattering of jokes that are too broad for me, but it takes its characters and its martial arts very seriously, and it’s so full of heart it’s hard not to love. So why fight it?

The goofy thing is I only rented this on VOD because Vyce Victus and Adkins Unleashed’s Michael Scott were separately raving about it on Twitter. Then in the cold open I saw what sure looked like the Smith Tower, and the credits were set to a song by Kid Sensation (beatboxing padawan of Sir Mix-a-Lot), and holy shit, this movie is entirely filmed in Seattle (and nearby Shoreline), how did I not know about it already? I’ll go into some Seattle stuff later, but please accept the praise of the above mentioned as evidence that I’m not just rooting for the local product. END_OF_DOCUMENT_TOKEN_TO_BE_REPLACED 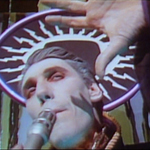 “Listen Boo Boo, you’re lucky you made it back the first time. If you want to join the pantheon of dead skate rock guitar heroes that’s your choice.”

SHREDDER ORPHEUS is a weird D.I.Y. type of movie made in the late ’80s in Seattle by people involved in the underground rock and art scenes of the time. It’s post-apocalyptic or futuristic or something, but more Max Headroom than MAD MAX. The story is based on the myth of Orpheus, played by director Robert McGinley as a skateboarder and lead singer/guitarist of a band called The Shredders. Instead of an Underworld there’s a sinister quasi-religious TV Channel called EBN (Euthanasia Broadcast Network) that hypnotizes the people. Just the normal people, maybe: the one person we see watching TV is the one civilian we see, the one non-punk or music scene type of guy that doesn’t work for the network. And the people who do work for the network look like they might as well be in bands because they’re all wearing white makeup and shit like ghouls. Most of their programming seems to be weirdos chanting slogans like “The Ministry of Sombulance – praise the ray!”

The EBN creeps kidnap Orpheus’s girlfriend Eurydice (Megan Murphy, DEADBEAT AT DAWN) after seeing her dancing (mostly just spinning and waving her arms a little, to be honest) at the Shredders show at the Thrash Bin Club. They decide she’s the key to co-opting the music counterculture for their purposes. “If we’re going to get beyond the corporate crust and expand our viewing addicts,” explains one of the executives, “we’ve got to reach out and put our finger on the main vein of the youth market. We need the heartbeat of America.” But if they kidnap this one dancer and base a show around her he says they can “play in Peoria.” END_OF_DOCUMENT_TOKEN_TO_BE_REPLACED 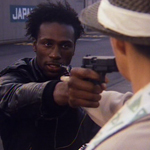 You ever heard of an actor just called Leon? He used to be credited as Leon Robinson. He’s also a musician, and has found most of his acting success playing musicians in such movies as THE FIVE HEARTBEATS (he played a Heartbeat), THE TEMPTATIONS (he played David Ruffin), MR. ROCK ‘N ROLL: THE ALAN FREED STORY (he played Jackie Wilson) and LITTLE RICHARD (he played Little Richard). He’s been working hard for years, at one point working as the stage manager for In Living Color while also doing supporting roles in major movies.

Despite all that alot of people probly just know him from Madonna’s “Like a Prayer” video:

But we here know him from CLIFFHANGER, ALI and especially BAND OF THE HAND. He might’ve wanted to be more of an action guy than he ended up being, because between his parts in COOL RUNNINGS and ABOVE THE RIM he produced an independent low budget action vehicle for himself. And filmed it in Seattle. So I watched it. END_OF_DOCUMENT_TOKEN_TO_BE_REPLACED 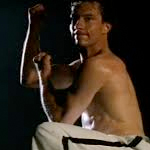 This week in my column at DAILY GRINDHOUSE I take a look at yet another VHS-only martial arts oddity, it’s called EQUAL IMPACT. Hats off if any of you have heard of it. This one stars one-and-done tae kwon do practicing twin brothers Joe and Jay Gates, plus Robert Z’Dar and Joe Estevez. And as I was watching it I was surprised to realize it was filmed in Seattle.

see my findings over on Daily Grindhouse 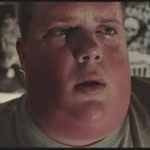 The only reason I heard of this indie teen movie is because it was filmed in Seattle. That’s kind of novel to us because most Seattle-based movies are really filmed in Vancouver (BATTLE OF SEATTLE, HOLLOW MAN 2, TRUE JUSTICE) or even, in the case of CHRONICLE, Cape Town, South Africa. Kelsey Grammer wanted to film Frasier in Cape Town, but he moved it to protest the end of apartheid. That’s a joke, Kelsey, I’m just busting your balls. Thanks for reading.

Anyway this is good for Seattle people to spot recognizable locations, and it’s not supposed to be Everytown, USA like WORLD’S GREATEST DAD, so they mention or make visual reference to Seattle clubs (Neumo’s, Comet Tavern) and institutions (Seahawks, Sounders, SIFF, Easy Street Records [R.I.P. Queen Anne location]). But the great thing is that it’s also a real movie, a sweet underdog story with real emotion and surprising nuance. And it’s directed by Matthew Lillard of SCREAM and SCOOBY-DOO fame. I’m impressed.
END_OF_DOCUMENT_TOKEN_TO_BE_REPLACED

aka I’m Still Waiting For You

I didn’t even realize it until I started watching it, but LOVERS LANE is a cheapass slasher movie shot in the Seattle area. Mostly Issaquah, I think. Anna Faris, who grew up in nearby Edmonds, is in the movie (not her first, but Wikipedia calls it “her first significant role”). It was filmed in 1999, but seems more like an ’80s slasher. END_OF_DOCUMENT_TOKEN_TO_BE_REPLACED

Cash is the full name of a big-shouldered, square-jawed, fresh-out-of-the-pen-and-eager-for-revenge individual on a rampage in an unnamed city that happens to have the Space Needle in it (more on that later). He’s a guy nobody should ever fuck with, but unfortunately for a couple guys it’s too late for that. They betrayed him on a messy bank job, and you never really know what could happen but I’m leaning toward him not accepting an apology. In the opening narration he says something like, “I was only ever good at two things. Killing’s one of ’em. I forget what the second one is.” So he goes to different clubs and back rooms roughing people up, shooting off heads, biting off ears, trying to get to the big man who betrayed him, or something. END_OF_DOCUMENT_TOKEN_TO_BE_REPLACED

That spoiler was the first thing I heard about the movie, but it happens maybe halfway through, so I probly shouldn’t have known about it. Anyway, it’s not what it sounds like. Considering that’s what it’s about it’s pretty upbeat. END_OF_DOCUMENT_TOKEN_TO_BE_REPLACED