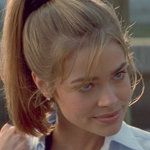 I’ve never been to Florida, and when I finally go there, let’s face it, I’ll probly just go to Disney World. So my impression of the place comes from Charles Willeford novels, Miami Vice, and the storied misadventures of Florida Man. From that perspective, WILD THINGS seems like a perfect mythical charting of the frontier that would soon bring us the election of George W. Bush. For the opening credits, helicopter shots survey the land from the swamps to the ritzy coastal town of Blue Bay, a collection of estates, country clubs and future Mar-a-Lago members where people wear white and tropical prints and the school counselor and his girlfriend both drive Benzes. END_OF_DOCUMENT_TOKEN_TO_BE_REPLACED 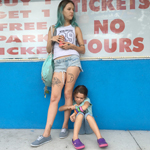 I didn’t know much more going into THE FLORIDA PROJECT than that some people said it was great, that it was something about Florida and kids and that Willem Dafoe would show up at some point. No idea what it was about, just open for something interesting. That was a good strategy. But this is a review, so I sort of gotta tell you more. Heads up.

Turns out it’s about kids around six years old or so living in tacky tourist motels near Orlando. In their world, most buildings are painted bright pink or purple or shaped like a giant orange or ice cream cone or wizard. The title comes from what Disney World was called during the development stages, but of course it’s a double meaning here because these kids are basically living in the projects. Their parents are young, single, unable to be with them during the day because of work, or because they are inattentive.

We first meet Moonee (Brooklynn Prince) and friends doing what they will do for most of the movie: run around giggling and raising holy hell. In that opening scene their current interest is spitting over a ledge onto a parked car whose owner Gloria (Sandy Kane), they soon discover, is smoking nearby, so she runs after them. They call her names and aren’t scared and are lectured for having “too much fun” after she tracks them to where they live and guilts Moonee’s mother into dragging them out to clean off the windshield with paper towels. In the process Moonee becomes friends with Gloria’s granddaughter Jancey (Valeria Cotto). END_OF_DOCUMENT_TOKEN_TO_BE_REPLACED 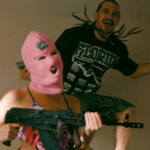 I have this dumb joke that always amuses me: whenever they’re looking for a director to do a new MISSION: IMPOSSIBLE or a Marvel Comics movie or something I suggest Harmony Korine. It’s funny to picture the director of GUMMO and TRASH HUMPERS selling out or deciding to do a normal mainstream movie, because it just seems like something he would never be interested in. I picture him as a smartass New York art kid for life.

So it was pretty funny to see his new one at a multiplex with an IRON MAN 3 trailer playing before it. I think this was by accident. In style and substance it’s not that much more normal than MISTER LONELY (the one about the commune of celebrity impersonators), it just happens that it focuses on a topic that can be very commercial: young girls in bikinis spraying beer on each other and jumping up and down and sometimes they have guns. And one of the stars is James Franco, who seems to have alot of interests in common with Korine, but is also the star of a $215 million Disney 3D fantasy movie that was #1 at the box office just last week. END_OF_DOCUMENT_TOKEN_TO_BE_REPLACED