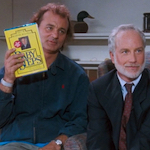 If we agree with director Bill Duke that A RAGE IN HARLEM is “no god damn comedy,” then we have now come to Summer 1991’s first actually funny comedy. WHAT ABOUT BOB? is also the first ’91 release we’ve come to that seems arguably too problematicTM to be made now, at least quite like this.

You see, Bill Murray (following SCROOGED, GHOSTBUSTERS II and QUICK CHANGE) plays a person with multiple debilitating psychological disorders who follows his psychiatrist to his vacation home and, as they say, drives him crazy. Of course this is uncomfortable because we know so many horror stories of stalkers – troubled people crossing boundaries with results that are less hilarious and more tragic. But what really feels of-a-different-time is just how much poor Bob Wiley’s struggles are played for laughs. As he squirms and winces while struggling just to step outside of his apartment or touch a doorknob or get on an elevator, the score by Miles Goodman (TEEN WOLF, K-9) makes sure we know that it’s cute and funny. That seems kind of mean, or just off base when I think about how much Bob reminds me of a much less lovable Bob I dealt with for years at my day job. END_OF_DOCUMENT_TOKEN_TO_BE_REPLACED 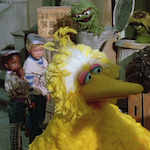 THE MUPPET MOVIE (1979) is a one-of-a-kind American family film masterpiece, followed by several enjoyable sequels. FOLLOW THAT BIRD (a.k.a. SESAME STREET PRESENTS FOLLOW THAT BIRD) is sort of the younger kids’ version of that, and it never quite caught on the same, but it’s worthy of sitting on the same shelf. It depicts Sesame Street (the street) on film, in cinematic terms, and takes some of its Muppet inhabitants out into the real world for adventures both goofy and heartfelt, with guest appearances by a few Canadian comedy stars.

It all happens because of a well-meaning but clueless all-bird organization called The Society of Feathered Friends, whose mission is “to place stray birds with nice bird families.” Somehow they receive a dossier about Big Bird living on a vacant lot with no bird friends, and decide to “help.” As they discuss how sad he looks in a photo an owl comments, “That’s funny, he looks happy to me,” causing outrage, because, according to Miss Finch (voice of Sally Kellerman, M*A*S*H), “We all know he can’t be happy. He needs to be with his own kind. A bird family.” END_OF_DOCUMENT_TOKEN_TO_BE_REPLACED 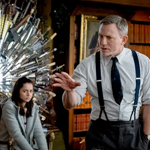 So I was much more open-minded for his new laughdunit mysteryblast KNIVES OUT, which sure enough is a fun time for all without anything that felt too corny, forced or self conscious for me. Only in the last shot did I think “oh, this is kind of Wes Andersony.” And by then it wasn’t gonna bother me much. END_OF_DOCUMENT_TOKEN_TO_BE_REPLACED

The Indian in the Cupboard 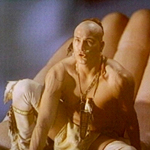 It sounds like a pun to say THE INDIAN IN THE CUPBOARD feels small, because you see, it’s about a tiny little man who lives in a regular sized kid’s bedroom. But it also is a movie that feels small, in a good way. Based on the 1980 children’s novel by Lynne Reid Banks, it’s the story of a kid named Omri (Hal Scardino, SEARCHING FOR BOBBY FISCHER) who discovers that he has one of those magic cupboards that turns miniature toys into living beings. The first one he does is a model Indian, who becomes an Iroquois warrior named Little Bear (Litefoot, MORTAL KOMBAT: ANNIHILATION). So Omri keeps li’l Little Bear in his bedroom, protects him, gives him materials to build a longhouse with (after he rejects a plastic teepee, having no idea what a teepee is).

So it’s a movie full of what must’ve been really difficult special effects, with many scenes of Litefoot on giant sets composited with Scardino on regular sets, but it’s all about smallness, a world inside this kid’s bedroom (or, in one scene, insides his fannypack). There is no bombast at all. It’s just a sweet, simple movie. END_OF_DOCUMENT_TOKEN_TO_BE_REPLACED