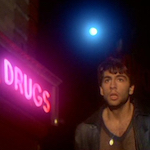 ALPHABET CITY is a unique, stylish little 1984 crime drama directed by Amos Poe, a New York City legend best known for co-directing the 1976 punk documentary THE BLANK GENERATION. This one’s only about 70% story and 30% ambience, but I kind of loved that about it.

It stars Vincent Spano (already in OVER THE EDGE, THE BLACK STALLION RETURNS and RUMBLE FISH, but still very young) as Johnny, a hot shot drug dealer who zooms around in a white Trans-Am (25th Anniversary Daytona 500 Edition according to Wikipedia) lording over the small area of the East Village named after its Avenues A through D. His license plate says “CHUNGA,” and I don’t know what it means, but it’s also his password when he knocks on the door at the crackhouse. END_OF_DOCUMENT_TOKEN_TO_BE_REPLACED 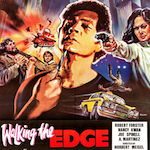 I watched WALKING THE EDGE because it came out on blu-ray from Fun City Editions – who seem to have an eye for ‘80s urban crime movies with a bit of an arty edge – and because it stars Robert Forster. I had just enjoyed him in ALLIGATOR, which is a much better movie to me, but it almost doesn’t matter. This is another one that for all its good qualities is about 85% running on the fuel of Forster’s charisma and acting choices.

It’s a simple story. He plays put-upon L.A. cab driver Jason Walk, who reluctantly picks up a fare one day (the cab is kind of a front – he really working for a mobster called “the Fat Man” [Bernard Erhard, voice of Cy-Kill on GoBots] and tries to avoid actual work), not knowing she’s on a revenge spree. At her first stop Christine (Nancy Kwan, THE WORLD OF SUZIE WONG) splatters a guy’s chunky blood across a window while Jason sits in the cab obliviously grooving out to jazz. At the second stop he sees her get in a shootout with some guys at a garage and while the two of them are driving away yelling at each other he realizes she’s been injured (not from a bullet – from a hubcap thrown at her like a Frisbee!), feels bad and brings her to hide out at his apartment. END_OF_DOCUMENT_TOKEN_TO_BE_REPLACED