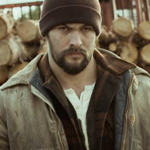 BRAVEN is the story of Joe Braven (Jason Momoa, BULLET TO THE HEAD), a nice, rugged logger guy who lives with his family in some snowy area in Newfoundland (or at least that’s where it’s filmed). I really didn’t know what the movie was going to be about, so when he wished a brotherly goodbye and safe driving to his co-worker buddy Weston (Brendan Fletcher, FREDDY VS. JASON) I thought Weston would never come back. And then when his wife Stephanie (Jill Wagner, Blade: The Series) had to leave and repeatedly talked about what she was going to do with him when she got home, I worried she would never come back. And then when he made his daughter Charlotte (Sasha Rossof) go to bed and wait until tomorrow to give her bracelet to grandpa (Stephen Lang, BAND OF THE HAND, DON’T BREATHE), I thought oh shit, Pops is not gonna make it through the night.

Well, I guess none of this is foreshadowing, they’ll all be okay. For a bit. And then they’ll all be in trouble. END_OF_DOCUMENT_TOKEN_TO_BE_REPLACED 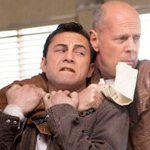 LOOPER is the new time travel related science fictional picture by Bruce Willis. But due to scheduling conflicts Bruce is only in part of the movie, most of the time he’s played by Joseph Gordon-Levitt (SHADOWBOXER) with a fake nose. This one is written and directed by Rian Johnson, the guy that did BRICK.

“Looper” is a made up futuristic word similar to how “Rian” is a made up spelling of a real name. I’m not buying either one. But I did like the movie. END_OF_DOCUMENT_TOKEN_TO_BE_REPLACED