The Bird With the Crystal Plumage 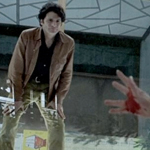 THE BIRD WITH THE CRYSTAL PLUMAGE is a Dario Argento movie I hadn’t seen before. This is his directational debut, so it shows what he was up to before the ones I’m most familiar with, DEEP RED, SUSPIRIA and INFERNO. He’s not yet the sicko artiste who made those three, but you can see him headed in that direction.

An American writer (Tony Musante) visiting Italy happens to be walking across the street from an art gallery one night when he sees a struggle going on inside. He runs over but can’t get into the large, plate glass storefront. He knocks on the window but is forced to just watch as a stabbed woman lays bleeding on the floor inside. Then he gets trapped behind another wall of glass. Another passerby brings cops in time to save the woman, but this American at the scene of the crime, and planning to leave the country soon, that doesn’t look too good. So they confiscate his passport.
END_OF_DOCUMENT_TOKEN_TO_BE_REPLACED 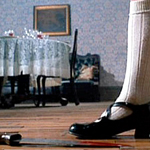 I hope this isn’t oversharing, but my first Dario Argento movie was PROFONDO ROSSO, which we call DEEP RED here in the states. I don’t think I knew anything about it when I rented it on a mysterious, seedy looking VHS tape that called it “DEEP RED HATCHET MURDERS.” That’s not the worst title because it is, in fact, about a series of murders, though some of them are done with knives and not hatchets. So the “hatchet” part is kinda misleading. The plural on the “murders,” though, that part was dead on. There’s a bunch of them.

The story begins in Cronenbergian fashion as psychic medium Helga Ulmann (Macha Meril) is doing a public demonstration of her skills, and is suddenly overcome when she senses evil thoughts by someone in the room. Our protagonist is David Hemmings (Dildano from BABARELLA) as British jazz pianist Marcus Daly, who happens to be walking beneath an apartment window as Helga is murdered in a genuinely shocking burst of violence (she’s hit from behind with… yeah, I guess it’s a hatchet, her head crashes through the window and then she drops-throat first onto the edge of the remaining glass. Ouch! And all up there on display like he’s watching an opera. END_OF_DOCUMENT_TOKEN_TO_BE_REPLACED 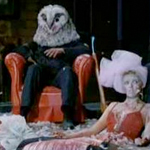 STAGEFRIGHT (aka DELIRIA, or STAGEFRIGHT: AQUARIUS as the title screen says) is a very stylish slasher/giallo type deal from Michele Soavi, Dario Argento’s second unit director on TENEBRE and PHENOMENA who went on to be best known for directing CEMETERY MAN. This one is more obviously in the footsteps of his mentor than that one.

It begins in aggressive stylization, a big-haired model hanging out on a soundstage city street, suddenly strangled in an alley. But this is not real, these are all people working on some kind of avant garde musical or some shit like that. There’s an overbearing, pretentious director, a bunch of primadonna dancers and actors and choreographers, some stage tech types, etc. And of course somebody is unhappy with something so they all get locked onto the soundstage and murdered one by one. END_OF_DOCUMENT_TOKEN_TO_BE_REPLACED