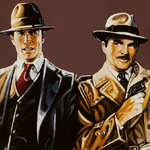 Burt is a behind-on-his-payments gumshoe, Clint is the Lieutenant who used to be his partner before he quit the force. Now they act like they hate each other, but of course they team up and work pretty well together. Their first scene together is a good one: Clint sits at the counter in a diner, drinking his coffee, staying out of it while two mafia thugs beat the shit out of Burt. He wants nothing to do with it until he gets bumped and spills some of his coffee, then he gets pissed. END_OF_DOCUMENT_TOKEN_TO_BE_REPLACED