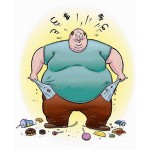 VISIONS OF HELL: THE FILMS OF JIM VANBEBBER

This Tuesday Dark Sky releases a 4-disc box set of the works of underground director Jim VanBebber. Although he’s been working since the mid-’80s this little box of sleaze represents pretty much his entire output: 2 feature films and some shorts. I think the only thing missing is a bunch of music videos, a trailer called “Chunkblower,” and some 8mm stop motion shorts he made as a kid. The guy is completely independent and uncompromising, this is not a gonna you expect to start directing commercials or be in the running to take over THE WOLF MAN. But I guess if it wasn’t such an uphill battle for him his movies wouldn’t be as interesting.

One of the two features is THE MANSON FAMILY, which he started in 1988 as a quickie exploitation movie that he expected to do in 2 weeks. Then he got obsessed with researching the actual crimes, ran out of money, started up again later and didn’t finish it until 2003. To be honest I’m not a big fan of this one even though some of the filmatism is amazing. It really looks and feels like it was made in the late ’60s or early ’70s. At its best it’s pretty terrifying, a really bad trip. The scene where they cover themselves in dog’s blood during a beachside orgy has to be seen to be believed. END_OF_DOCUMENT_TOKEN_TO_BE_REPLACED 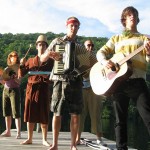 About a month ago I saw this movie DEADBEAT AT DAWN, a sleazy, gorey student film about lowlife THE WARRIORS style gang members stabbing each other and robbing armored cars and spinning nunchucks in the cemetery. The director and star was Jim Van Bebber, who seemed a little bit too into shock value but I thought he was still likable. His movie is corny and amateurish as hell but it has alot of conviction. This guy is swinging on ropes and jumping off bridges and piling on the hideous gore effects like nobody’s business. It’s one of those things where you don’t really love the movie but the guy’s obvious dedication to getting it done sort of elevates it. It’s about the journey, man.

Usually a guy like this, they go on to make bigger and better movies and become well known and respected, or more likely they go on to make slicker but much worse movies and then their career fizzles out and you forget you ever thought they had any potential. It’s hard to say where Van Bebber is headed though because since he finished DEADBEAT in 1988 he never bothered to sell out to Hollywood or get stuck signing deals that never amount to anything. Since then he has spent almost his entire career on one other movie, CHARLIE’S FAMILY. Another raw, fiercely independent, ten thousand miles away from Hollywood kind of low budget movie. This time it’s about the Manson family, it has some of the same cast but Van Bebber plays family member Bobby instead of the lead. END_OF_DOCUMENT_TOKEN_TO_BE_REPLACED

What this is is a no-budget first timer trying to prove himself 16mm type movie. A film student named Jim Van Bebber stars in it and directed it, using his film school buddies as actors, spending many years and sweating alot of blood to make his movie and prove himself. He finally finished it in 1988, but it feels more like early ’80s or at times even late ’70s. I think he was definitely trying to make a movie like EVIL DEAD or TEXAS CHAIN SAW MASSACRE or something but one thing that makes it unique, he made an action movie instead of a horror movie. But he still put in a whole lot of bleeding and stabbing and screaming and dying, etc.

Now, there are alot of reasons not to like this movie. There is alot of bad acting and dialogue, awkward and amateurish shots, self conscious attempts at shocking the audience. Worse than that, it is a movie about gangs with names like The Spyders and The Ravens. And the characters have names like Goose and Bonecrusher (actually I thought they were saying Bumcrusher, but I’ll take IMDB’s word for it). We’re talking about those movie type of gangs where they are a bunch of long haired heavy metal dudes who don’t look tough at all but they figure if they wear a headband and a driving glove, and supposedly do alot of drugs, then that will make them hardcore. There are lots of bad getting high scenes and drinking beer scenes and evil cackling and threatening gum chewing. And every once in a while they remember that they want it to be THE WARRIORS or CLOCKWORK ORANGE so suddenly the guys will be wearing Halloween masks or codpieces or something. And there is always graffiti in the background that says things like “THE CITY IS SHIT.” (social commentary) END_OF_DOCUMENT_TOKEN_TO_BE_REPLACED