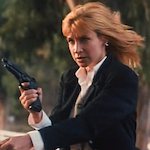 McKay makes the very questionable choice to run by herself toward these gangs firing her gun in the air. The sound causes them to start fighting and shooting at each other. She personally beats the shit out of several of them before backup arrives. END_OF_DOCUMENT_TOKEN_TO_BE_REPLACED