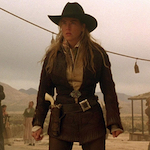 But I think it’s truly distinct among ‘90s westerns, with two major things that make it stand out. One is the incredible cast. It includes great western icons: Woody Strode, Roberts Blossom, Pat Hingle, and of course Hackman in a performance arguably on par with UNFORGIVEN. It has colorful roles for genre favorites: Lance Henriksen, Keith David, Mark Boone Jr., Tobin Bell, Sven-Ole Thorsen. It has Gary Sinise immediately after his star-making, Oscar-nominated performance in FORREST GUMP. And it has two right-before-they-exploded co-stars: pre-L.A. CONFIDENTIAL Russell Crowe as former outlaw turned pacifist preacher Cort, and known-for-WHAT’S-EATING-GILBERT-GRAPE Leonardo DiCaprio as The Kid, the cocky, baby-faced son of Herod entering the contest just to get the attention of his asshole dad. We actually see The Kid mobbed by young women at one of the shooting matches, something that would become more familiar to DiCaprio a year later when ROMEO + JULIET came out. END_OF_DOCUMENT_TOKEN_TO_BE_REPLACED 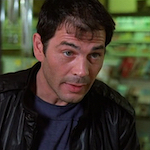 ALLIGATOR (1980) may not have knocked the world on its ass the way THE TERMINATOR did, but it’s another genre movie made by Roger Corman veterans in the ‘80s that holds up today. People often credit that to an allegedly satirical screenplay by John Sayles, who had already written the Corman classics PIRANHA and BATTLE BEYOND THE STARS and begun his indie auteur career with RETURN OF THE SEACAUCUS SEVEN. (He completely rewrote an earlier script by Frank Ray Perilli [THE DOBERMAN GANG, DRACULA’S DOG, LASERBLAST], who gets a story credit). But let’s not overlook the serious skills of director Lewis Teague. His NYU classmate Martin Scorsese had reportedly recommended him for the job at New World Pictures, where he’d edited COCKFIGHTER and done some second unit and editing on DEATH RACE 2000 and AVALANCHE. ALLIGATOR was his third time directing a feature, after DIRTY O’NEIL and THE LADY IN RED. He was also directing second unit for Sam Fuller’s THE BIG RED ONE around this same time, but I’m not sure if that was right before or right after the gator picture, so I can’t speculate how one gig might’ve informed the other.

ALLIGATOR opens with a teenage girl (Leslie Brown) on a family vacation to Florida watching a guy get mauled at a gator wrestling show. Despite this potentially traumatizing experience she buys a baby gator from the farm and names it Ramon. But when she’s back at home somewhere in Missouri her drunk dad flushes the poor thing down the toilet. Then we cut to 12 years later when Ramon is still alive in the sewer system, and has grown to unusual size and hunger from munching on the clandestinely dumped victims of illegal animal experiments, and is destined to bump heads with police detective David Madison (Robert Forster in his follow up to THE BLACK HOLE).

I would like to note that a news report on the radio places the toilet flushing during the ’68 Democratic National Convention, i.e. the time and place when in real life Forster was filming MEDIUM COOL. END_OF_DOCUMENT_TOKEN_TO_BE_REPLACED 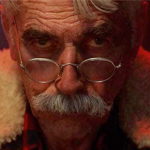 Who does that? And who pulls it off? In this case it’s a first time feature writer/director named Robert D. Krzykowski.  END_OF_DOCUMENT_TOKEN_TO_BE_REPLACED

Battle Beyond the Stars 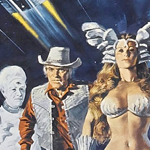 Fuck a star war – what about a battle beyond the stars? I know a battle is smaller than a war, it is only one of the units that makes up a part of a war, but maybe that’s better. More intimate. More focused. And then it’s beyond the stars instead of within them, as a mere star war is. Beyond is better. This battle has transcended the fucking stars.

Admittedly, it doesn’t seem like BATTLE BEYOND THE STARS takes place further away from here than any of the STAR WARSes. In fact, it is for sure closer, because people have heard of the planet Earth, and one guy is from there. His name is Cowboy, but not the pioneering rapper from the Furious Five who coined the term “hip hop.” He’s actually George Peppard a couple years before The A-Team and he wears a cowboy hat, plaid shirt and insulated silver space pants. He always shows off that he likes westerns and exotic Earth liquor. Obviously he’s the Han Solo character, and he’s entertaining, but most of his scenes are alone in his ship, so there’s a Chewbacca-sized hole next to him. END_OF_DOCUMENT_TOKEN_TO_BE_REPLACED

MEN OF WAR is a Dolph Lundgren mercenaries-on-a-mission movie. In the surprisingly atmospheric opening Lundgren’s ex-Special Forces character Gunar is hanging out on the streets of Chicago, wearing a hat he could wear if the movie was set during the Depression, his breath showing in the cold air. Some tough guy rudely tells him to talk to somebody, gesturing to a limo. “In the back seat?” Gunar asks and when the answer is yes he bashes the guy’s head through the backseat window and leans in to talk to the passenger. So you don’t have to wait too long for the movie’s declaration of badass intent. END_OF_DOCUMENT_TOKEN_TO_BE_REPLACED